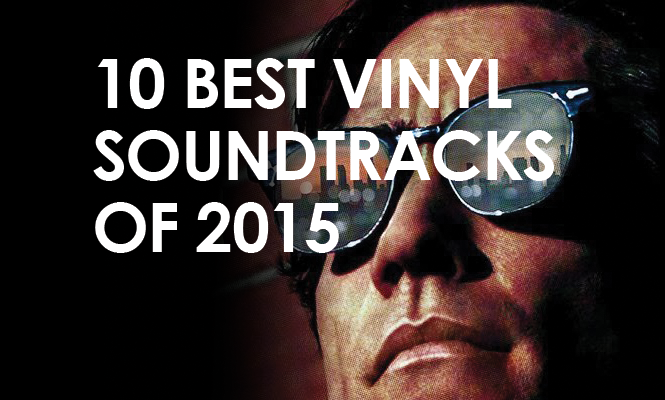 Mondo and Death Waltz (joint operations as of last year) have dropped some of our favourite soundtrack releases this year – from that creepy-sexy A Girl Walks Home Alone At Night edition to those blockbuster Batman and Back To The Future box sets.

They’re not the only heroes in the game though – a swathe of labels are pressing down midnight movie scores, anime classics and video game soundtracks to limited, irresistibly packaged wax. With that in mind, we’ve invited Death Waltz and Mondo to roundup the year in soundtracks with their pick of 10 from across the board.

A few rules: Everything from Disney music to 8-bit video game scores are in. Equally, re-releases and new soundtracks are both fair game. And full disclaimer: we’ve given Death Waltz and Mondo a quota of one record from each of their own imprints.

2015 has been a banner year for soundtrack fans. Companies like Waxwork and One Way Static have gone from strength to strength and new kids on the block such as Lunaris and Strange Disc have been releasing killer niche horror scores.

Both Amazon and Zavvi have decided to get into the vinyl game, which gives you an indication of just how strong the market is. And imprints like Varese Saraband and LaLaLand have got back into the vinyl market decades after leaving the format behind.

We now have a new label called Tiger Lab which has been focussing on anime scores while video games on vinyl seems to be the next big thing for 2016 with labels Data Discs and Iam8bit leading the market.

The next 12 months will be very interesting indeed as we are seeing no slowdown in vinyl growth worldwide. We’re extremely excited to see where the vinyl soundtrack market ends up next.

You wait for years for a Popol Vuh re-issue and then two come along at once! Released this summer through both Wah Wah and Waxwork Records, both sound incredible so it comes down to whether you want original art (Wah Wah) or a newly imagined interpretation (Waxwork). As soundtracks go they really don’t come much better than this – there’s a timeless quality that is both beautiful and unsettling at the same time. The instrumentation and musicianship is just staggering. Your ears will be thanking you for many years to come once purchased. This was a project that Mondo had pursued many years ago, but thankfully Fairfax Classics, a sub-label of Walt Disney Records themselves has taken to task to release ALL of the music from Disney’s original Silly Symphony shorts. And, they are packaging it in a gorgeous looking box set.

It is very rare that an in-house label takes this much care over a re-issue, but you can tell that the people of Fairfax Classics are as obsessed with these titles as the fans are. I hope they continue this series with a full score releases of other classic Disney properties – because this is how it should be done. Italians Do It Better haven’t let me down yet and this score is something that has been on repeat since I got it. The vinyl version is out proper in 2016 but IDIB have a killer box set available right now featuring a CD , 7” flexi discs and posters. Jewell’s production is so smooth and his melodies so on point it puzzling that no-one has used him for a full score before this. Kudos to Ryan Gosling for letting him add the most perfect aural accompaniment to his gorgeous visuals.

Steve Moore (Zombi) is quickly becoming my favourite synth composer working today, his work has a retro edge to it but at the same time manages to be fresh and easily identifiable as a Steve Moore record. His uses an arsenal of analog synths to create multilayered wall of sound that begs to be played so loud it will shake your walls. Fury Road‘s soundtrack by Tom Holkenborg (AKA Junkie XL) is a modern soundtrack masterpiece. It’s pulse-pounding, operatic, and more importantly it’s catchy! I listen to it regularly and there are refrains that sections that I hum along to myself throughout the day. Naturally, I love the movie, and so that helps, but we had the experience of hearing the soundtrack before seeing the film and I loved it even without the visual element. It’s just that good.

We assigned a British artist who goes by the name BoneFace, for the packaging because his artwork just evokes this brutal, aggressive emotion that felt natural in this post-apocalyptic landscape. We also opted to press the album in two different color schemes – White with silver spray for the Warboys going “chrome” for Valhalla and Aqua Cola to represent clean water, littered with sand and dirt. Hopefully we did George Miller proud, as he did cinema proud this year. Walt Disney Records, in conjunction with Hot Topic have steadily been releasing essential Disney soundtracks on picture disc for the last two years. I’m not the biggest fan of going to the mall, or of picture discs, but I am the biggest fan of the A Goofy Movie soundtrack. If you haven’t seen the movie (and I completely understand why you haven’t – I’ve heard myself trying to convert the uninitiated before…) just trust me that it is excellent.

It’s this oddly perfect, family vacation road-trip movie that hits all of the emotional beats you’d expect from a Disney animated movie, but more importantly it introduced the world to the Goofy Universe’s equivalent of a Prince / Michael Jackson hybrid named Powerline (expertly performed by Tevin Campbell.) And in doing so created a two of my absolute favourite pop songs of the ’90s – ‘Stand Out’ and ‘I 2 I’ (They even got the Prince-esque spelling down pat). Couple that with show-stopping broadway musical quality songs (‘After Today’) – I couldn’t resist a trip to the mall to grab it. Oh my god. I love Le Matos. Managing to mix Carpenter, Daft Punk and ’80s synthpop with stunning huge anthemic songs is no easy task but some how Le Matos manags to do it in spades. In a year when between Death Waltz & Mondo we have released some absolute killers that this stands up there at the top, should tell you all you need to know about whether this record should be in your collection or not. Iam8Bit got into the vinyl soundtrack game this year and I was pleasantly surprised that led off with one of my favourite games Battletoads. There is nothing conventional about most video game soundtracks from the ’80s. A lot of it had to do with the limitations of what the NES, or arcade soundboards could handle – but despite that, there is still something so off-kilter about David Wise’s Battletoads that makes its soundtrack just as charming and clever as the game it underscores. At times it feels like the best B-Movie soundtrack you’ve never heard. Oddly enough I never thought about this score outside of the movie until Invada release it. Sure I loved the film and thought the music was good within the context of the film, but it wasn’t until I sat down one night with the record and gave it my full attention that I realised just how good it was. It’s understated yet majestic and quietly works it way into you head and then won’t leave. It’s been on heavy rotation here since release and I can’t see it moving too far from the stereo in the foreseeable future if I am honest. Nicholas Winding Refn has been curating a soundtrack reissue series for Milan Records. This year, they reissued Basil Poledouris’ soundtrack to Paul Verhoeven’s masterpiece RoboCop. Brilliant satire, an unflinchingly violent action movie, RoboCop is essential ’80s cinema and the soundtrack is equally essential. The score is triumphant, so militaristic, and yet so catchy, that it perfectly underscores the themes of the film. Next year the same team is reissuing the score to The Terminator, and I can’t wait.