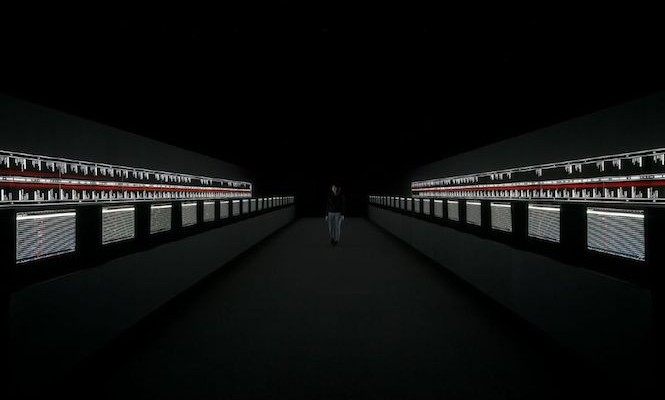 The Vinyl Factory presents the UK premiere of a new work by international artist-composer Ryoji Ikeda that explores music and visual art through mathematics and physics.

supersymmetry is Ikeda’s first large scale solo exhibition in London, and his first project in London since spectra (produced by Artangel) dramatically illuminated the capital’s night sky in August 2014. This new piece is an immersive, disorientating installation of colliding, mutating, sound, text and visual data, utilising forty projectors and computers.

An intense exploration of the intersections between music and visual art through mathematics, quantum mechanics and logic, the work draws on Ikeda’s residency at Centre For Nuclear Research (CERN). The world’s largest particle physics research institute, CERN is currently testing ‘supersymmetry’, a theoretical mathematical model that helps explain why particles have mass and the basis for Ikeda’s work. Japan’s leading electronic composer and visual artist, Ikeda has gained a reputation as one of the few international artists working convincingly across both visual and sonic media, orchestrating sound, visual materials, physical phenomena and mathematical notions into immersive live performances and installations.

Co-produced by Yamaguchi Center for Arts and Media [YCAM] , Le lieu unique, scène nationale de Nantes with the Support of the City of Nantes and the Ministry of Culture and Communication (France), Ryoji Ikeda Studio

Photos by Ryuichi Maruo, courtesy of Yamaguchi Center for Arts and Media [YCAM]