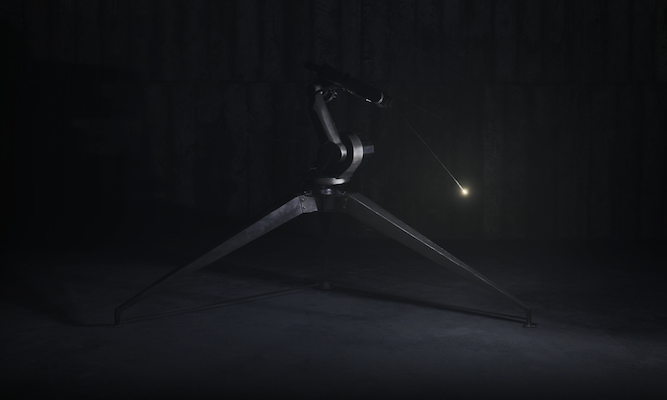 The Vinyl Factory is proud to present The ADA Project by Conrad Shawcross at its exhibition space at Brewer Street Car Park in Soho, London.

Bringing the project to London for the first time, Conrad Shawcross has invited four female musicians to respond to the movements of an industrial robot, hacked and programmed by the artist to create four unique choreographies. Turning the commissioning process on its head, Shawcross has created the parameters for the robot’s movements to inspire, rather then be determined by, the pieces of music.

Drawing inspiration from mathematician Ada Lovelace, whose work with inventor Charles Babbage is heralded as among the very first in proto-computer programming, Shawcross worked closely with his four sets of collaborators, inviting Holly Herndon, Mira Calix, Beatrice Dillon & Rupert Clervaux and Tamara Barnett Herrin & Mylo to immerse themselves in Ada’s story and study the robot over a period of time at Shawcross’ studio.

Each composition will be pressed by The Vinyl Factory as one of four limited edition laser etched 12” vinyl records, each accompanied by one of four artist’s prints, hand signed and numbered by Conrad Shawcross, with the singles also available alone as a larger edition. 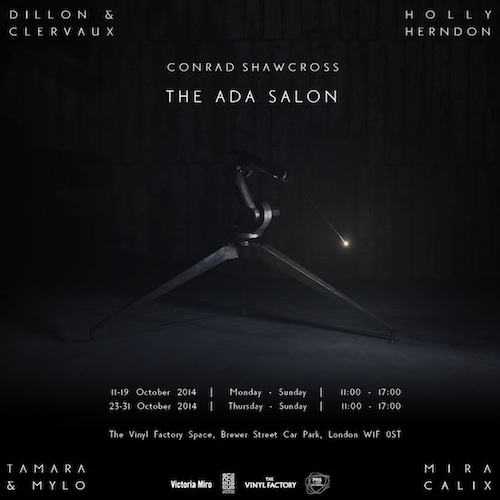 With Lovelace pre-empting the birth of computer generated music by more than a century with her prediction that Babbage’s complex counting machine “might compose elaborate and scientific pieces of music of any degree of complexity or extent”, Shawcross based each of the robot’s four choreographies on ratios and drawings for the computer which Babbage never fully realised.

Open to the public between 11th and 19th October and 23rd to the 31st October between 11am and 5pm, visitors to the exhibition will be able to select their chosen programme and related musical composition from a panel of four triggers. The ADA Salon will be free to visit with food by Arabeschi di Latte available.