The “first ever blues record” is up for sale on eBay 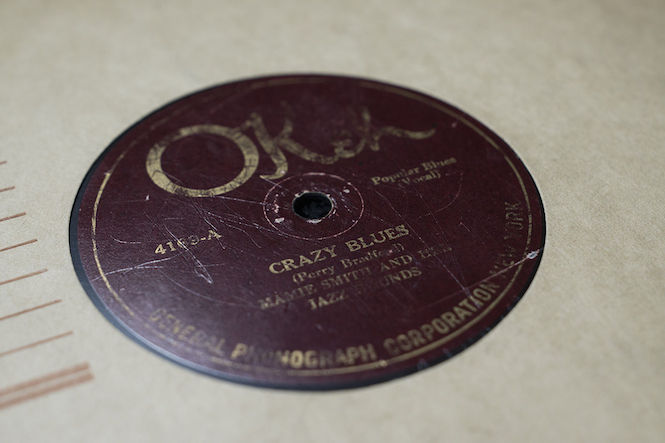 Crazy Blues is regularly cited as the first blues recording ever, but these history books have got it wrong. There are plenty of examples of earlier blues recordings, take William Christopher Handy’s Memphis Blues, which was recorded six years before Crazy Blues.

The landmark thing about the record is not that it’s the first blues recording, but that it’s the first blues record featuring an African American vocalist. Sophie Tucker, a white singer, was scheduled for a recording session earlier in the year, but fell ill. Perry Bradford, who wrote Crazy Blues, persuaded Okeh Records to use Smith instead. The song became a hit, selling 10,000 recordings in its first week and 75,000 within a month and eventually selling a million copies in less than a year.

The success of Smith’s record was a milestone in that it led to a scramble from record companies to seek out blues divas, paving the way for the professionalisation of black music and the proliferation of black artists. Because of its significance the record was ushered into the Grammy Hall Of Fame in 1994.

Now someone has listed this historic record on eBay for £68.00, touting the “first ever blues record” card. Overall the record looks in relatively good condition given that it’s a 95 year old 10″ shellac. According to the seller “the “Crazy Blues” side is the one with the most damage, it has some deep scratches and skips at some points but still is able to play. The label also has some wear as seen in the pics. The “It’s right here for you” side is in excellent condition, almost no scratches and label is very good.”

Check out photos of the record below: