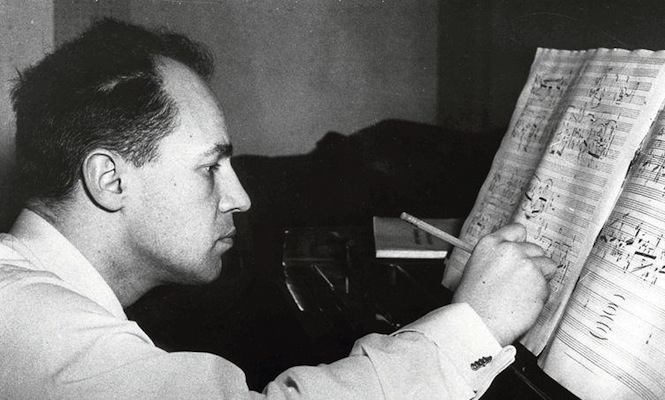 Founding a centre for advanced acoustic research in Paris, French composer, conductor and pianist Pierre Boulez played a key role in the development of electronic music and will be remembered alongside John Cage for breathing life (and the fear of God) 20th century classical music, tearing through convention with a punk zeal, and even recording with Frank Zappa and his synth ensemble The Barking Pumpkin Digital Gratification Consort.

With the death of Pierre Boulez on 5 January, the classical music world has lost its greatest living musician. Born in 1925, Boulez came to prominence as a young man at a moment of revolutionary change in the history of Western art music. With Karlheinz Stockhausen, John Cage and Luciano Berio, among others, Boulez led the charge in the battle between innovation and tradition in the years after the end of the Second World War.

Not since Wagner had there been a composer who wrote about music in such radical and exciting terms. Unlike his gentle teacher, Olivier Messiaen, Boulez took no prisoners. There was an extremity in his written and spoken pronouncements in the decades after the war that marked him out as a hardline musical Jacobin (in an interview with Der Spiegel in 1967, he famously said that all opera houses should be burned down). His early insistence on total serialism as the only viable compositional technique and his utter disdain for any music written in a tonal or gradualist style, shocked and offended large swathes of the musical establishment and many never forgave him. Their revenge was to brand Boulez’s own music as a kind of non-music, as ugly and rebarbative noise. Nothing could be further from the truth. For, though Boulez spoke of revolution, in his own mature music he entered into a complex and sensitive dialogue with the great Modernists, taking sustenance from musical languages as different as those of Webern, Berg, Debussy, Ravel and Bartok. His groundbreaking works of the fifties – Le Marteau Sans Maître and Pli selon Pli – have entered the canon as works of extraordinary delicacy, imagination, intellectual rigour and sheer sensuous beauty of sound.

As a composer, Boulez was an explorer, and after his early serialist phase he experimented with chance and improvisation as generators of structure and narrative, as well as with electronics and other innovative ways of making musical sound. In the early ‘70s, he got French government support to open an institute for the study and exploration of new forms of musical composition. IRCAM (next to the Pompidou Centre in Paris) hosted composers from all over the world, giving them access to the best performing musicians and the most advanced technical and computing resources. At IRCAM, Boulez himself was able to work with the spatialisation and manipulation of sound in real time – for example, in Répons, for six soloists, chamber orchestra and live electronics. (In 1984 he collaborated with Frank Zappa on a recording of Zappa’s work.) Boulez’s concept of form as maze or labyrinth and of the compositional process as open-ended, fed his innate perfectionism. He was an inveterate reviser of his own work and he composed less over his long career than he might have wished. At the same time, his discovery of an immense talent for conducting took him increasingly away from composition. Nevertheless, it is no exaggeration to say that Boulez was the last of the great composer-conductors of the modern classical tradition, a tradition which began with Berlioz and Mendelssohn and, via Wagner, reached its apogee in the careers of Mahler and Strauss.

In the nature of things, it was Boulez the conductor that most people knew best. His pre-eminence in this field led to a supreme international career, as he took principal conducting positions at the BBC Symphony Orchestra, the Cleveland Orchestra and the New York Philharmonic. His sojourn at the BBC (thanks to the far-sighted intervention of William Glock) constituted a golden age in British music, opening the ears of countless British listeners to musical worlds well beyond their comfort zone. Boulez’s conducting style was singular. Unusually, he did not use a baton, conducting only with his hands. Such was his authority on the podium that he could command vast forces in huge musical works with an economy of gesture that was spellbinding. To watch him conduct The Rite of Spring or Bluebeard’s Castle or La Mer was to understand the very nature of musical energy. (There’s an incongruous 1968 film of Boulez conducting Debussy’s Jeux, where, dressed in white shirt and wearing shades, he looks like an extra from The Battle of Algiers or a traffic attendant directing the flows around L’Étoile).

Anyone lucky enough to hear Boulez conduct live, will never forget the revelatory nature of the experience. His performances, in an expansive repertoire that stretched from Wagner to Birtwistle, combined structural strength and transparency with breath-taking precision and delicacy. The accuracy of his ear was legendary and he could balance and adjust orchestral sound like no-one else. Whether in the gentlest or the most terrifying music, the effect was of unutterable beauty and power. Otto Klemperer’s verdict in 1973 remained valid until the day Boulez died: ‘he is without doubt the only man of his generation who is an outstanding conductor and musician.’