American Hardcore: An exhibition of US hardcore punk singles (11th April – 4th May) 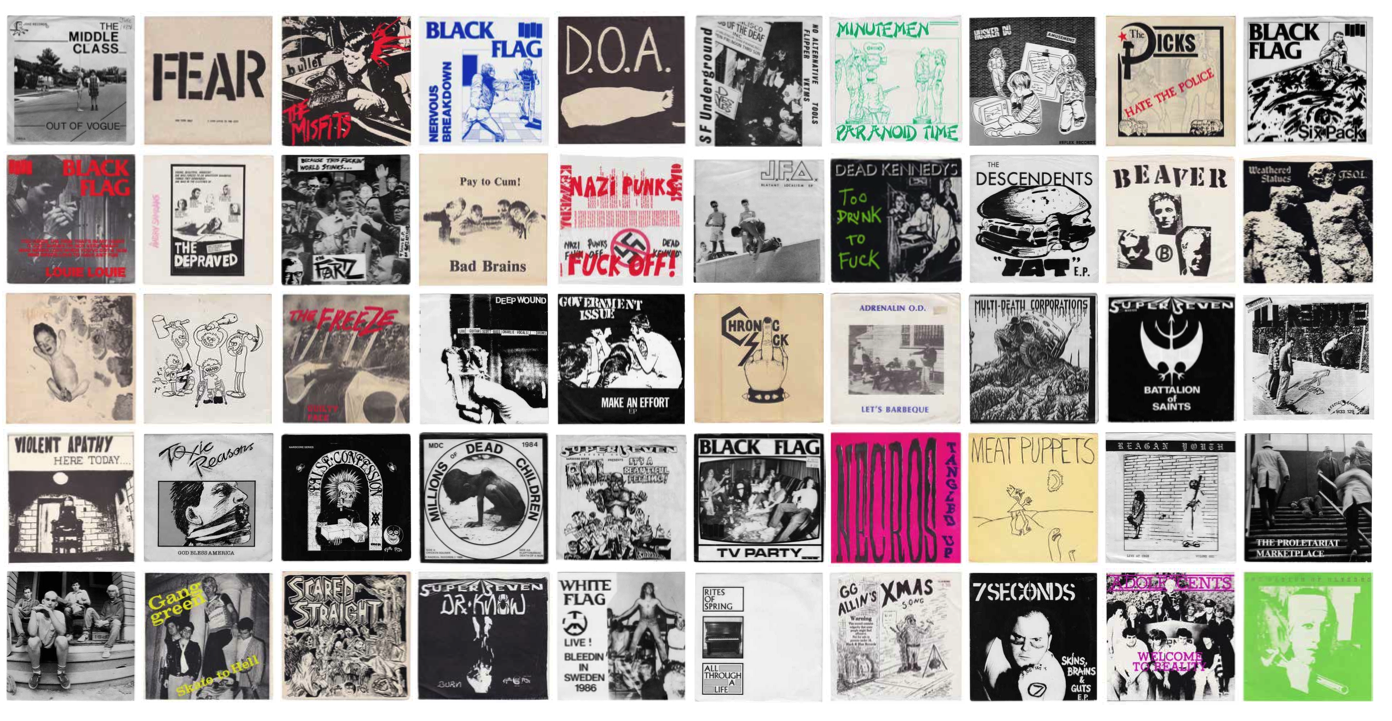 The Vinyl Factory and The Mott Collection announce a new exhibition and publication: American Hardcore, 1978-1990. Bringing together 50 American hardcore records spanning the apex of the genre, Toby Mott’s invaluable collection tells the story of hardcore punk through its iconic, anarchist artwork.

In the spirit of the music, hardcore punk burned most brightly for a very short space of time. Over the course of little more than 12 years, groups like Black Flag, Bad Brains and the Dead Kennedys created an angry and disaffected subgenre of punk which flared spectacularly in local suburban communities across America and made waves across both the country and the world.

In this period the genre crystalized into something (anti-)sacred, preserving an ethic of rebellion and DIY culture that pushed beyond punk’s anti-establishment posturing. Most importantly for its bands and their cult followings, hardcore was something uniquely American.

To talk of a disaffected youth disaffected with punk puts hardcore into some sort of perspective. The Sex Pistols may have paved the way, but for the kids in the underground scenes on the West Coast, punk style was still too ‘English’. Likewise, in the US the big-city outfits like New York Dolls and the Ramones were seen as decadent, enjoying major label contracts in the classic rock ‘n’ roll tradition. Hardcore threw all that out the window. The bands, like their fans, wore t-shirts, jeans and boots and worked in gas stations; their labels were independent and the covers hand-printed.

The group to strike the first blow was Black Flag who emerged from Hermosa Beach, California in 1978 alongside the Germs and the Circle Jerks, themselves featuring original Black Flag singer Keith Morris. In that vein, the scene remained fiercely local, spawning a proliferation of DIY labels whose abrasive attitudes were reflected in the immediate and iconic nature of the 7” artwork.

Embarking on punishing nationwide tours, the West Coast hardcore of Black Flag and San Francisco’s Dead Kennedy’s soon spread to eastern enclaves in Washington DC, Boston and New York City. As a result, the scene evolved as both disparate and tribal, and by the mid 80’s many of its original exponents had splintered off to form new projects, while bands like Bad Brains and Bad Religion began experimenting with broader influences.

The exhibition at the Vinyl Factory in collaboration with The Mott Collection tells this story through the iconic cover artwork of 50 American Hardcore records, visually documenting the scene’s subtle shifts and changes between the late seventies and early nineties.

The collection of 50 7” singles will be for sale as a framed artwork from the gallery. In addition, The Vinyl Factory has created a commemorative publication, which is also for sale. Limited to 300 copies, this catalogue documents 50 US Hardcore Punk singles from this period, and includes a 7” vinyl pressing of a Black Flag interview from 1981 and an oversized foldout print.

The exhibition will run at The Vinyl Factory Chelsea from 11th April to 4th May 2013.