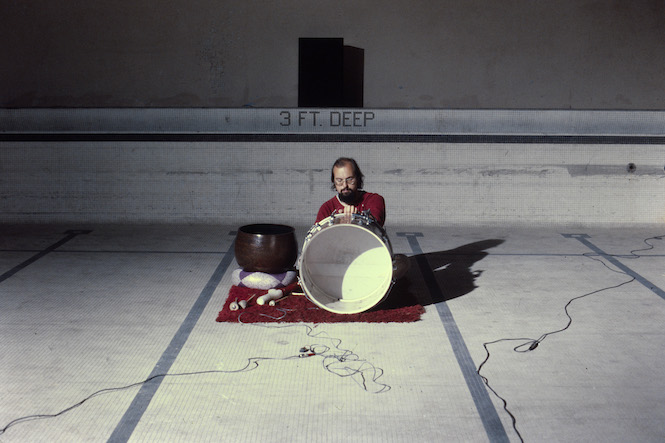 This autumn The Vinyl Factory & Blain|Southern present significant never-before-seen works from Bill Viola’s early career. The exhibition illustrates Viola’s boundless experimentation with the newest media of the time, which paved the way for subsequent generations of artists working with video, sound and computer technology.

Two works are featured, The Talking Drum and Hornpipes, that explore the resonances of an empty swimming pool. The works are sonic manifestations of Viola’s work with physical presence and a logical development following his early experiments with audio.

These pieces were recorded at various sessions in an empty swimming pool at Media Study/Buffalo, NY, between the late Seventies and early Eighties, and reflect also his interests in non-western music and religion are also reflected here through in the transcendental nature, instrumentation and sonic qualities of each piece. Viola’s ground-breaking work in this field coincided with the rising popularity of electronic music.

Restored by Bill Viola Studio, recordings of these performances are presented together for the first time as a limited vinyl edition of 100, pressed by The Vinyl Factory. The hand numbered edition features two full compositions, The Talking Drum and Hornpipes and an excerpt from a series of experimentations entitled Pulses (Duomo Bells). Reproductions of the original program notes and invitation from a 1979 Composers Inside Electronics performance in Buffalo, NY are also enclosed.

In conjunction, Blain|Southern will present a rarely exhibited Bill Viola piece from the same period. The exhibition at Blain|Southern focuses on one monumental installation Moving Stillness (Mt. Rainier), 1979, shown for the first time since its inauguration at Media Study/Buffalo, New York. With a large body of water, environmental sound recordings and projections, Viola’s multi-faceted yet serene creation was pioneering in its mixed use of media. All photos by Kira Perov

The 8 best record shops in Bristol