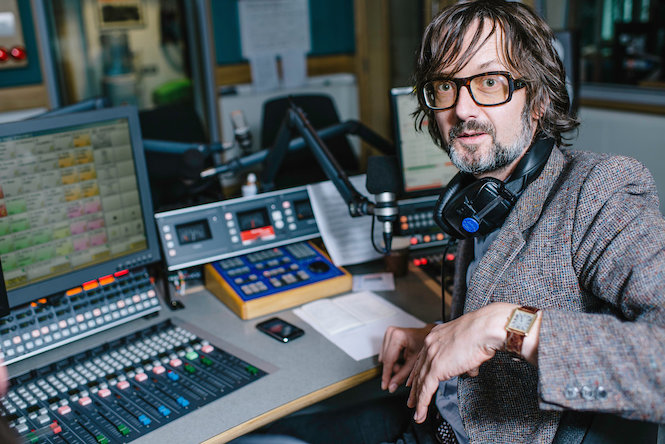 Former Pulp frontman Jarvis Cocker has dreamed up a series of fictional records that will be exhibited in Paris this summer.

Harking back to fictional soul superstar Mingering Mike‘s extraordinary collection of hand-drawn record sleeves that now live at The Smithsonian Institute, Jarvis Cocker has designed 20 imaginary records of his own. Entitled “20 Golden Greats”, the new art piece is composed of vinyl records bearing the names of fictional songs credited to his best loved labels like RCA Victor, Belter and Disques Vogue.

“It’s a way of playing with the machinery of the record industry: for one disk, I imagined I was at Philips, on another, that I was at Motown, or the Island of the 1970s. I imagined myself on all those labels that I love, that I track down as a collector, in record shops.” Cocker said in a press release. “Titles are an important part of the music; in just a few words, they reflect an artist’s imagination. As a songwriter, someone who works with words, I enjoy the challenge of expressing something in barely three words.”

Penned with an imaginary title and sealed with an iconic logo, the raw black vinyl springs to life, transforming into a record with personality and character. The work meditates on this symbolic dimension to records: exploring the way that intimate worlds and semantic universes live within titles and artwork. The fictional records are all Gold records: an indulgence in the material fantasy of releasing on, say, Island and selling millions. The other side of the exhibition explores the immaterial: the spirit of the music. Besides the gold records, footage from an old English TV show with an audience screaming, clapping and whooping to a music performance will be screened. As far as Cocker’s concerned, this is the real measure of success.

“In contrast to the gold record, which is the record industry’s way of confirming commercial success, these fans who engage, share an energy, a communal moment that’s ultimately not so focused on the band, it’s them who symbolise what music means to me: an energy to be shared, that draws people together, that encourages interactions via the act of listening and dancing,” said Cocker.

The accompanying instrumental soundtrack, produced by Cocker and featuring collaborations with French producer Pilooski and English artist Serafina Steer, will be available on limited edition vinyl at the gallery.

The exhibition runs from June 17 to August 28 at the Red Bull Space Paris.

The making and re-making of D'Angelo's Black Messiah

Someone's converted a PlayStation One Console into a DJ turntable