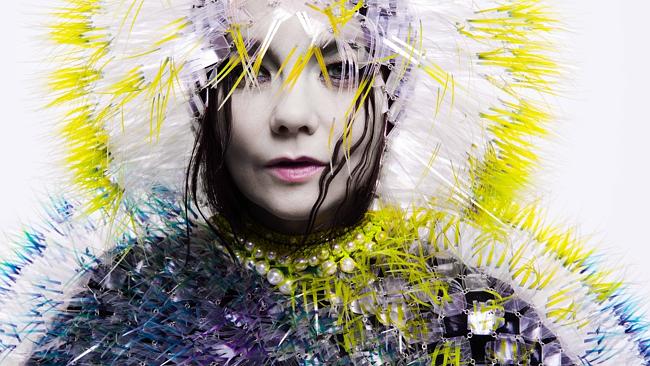 Having developed the first app-as-album for Biophilia in 2011 and with her next music video set to be produced for virtual reality device Oculus Rift, Björk returns to printed paper for a new career retrospective, published recently to accompany the ongoing exhibition at MoMA Björk at The Museum of Modern Art.

Designed by long-time collaborators M/M, Archives is far from a conventional retrospective. For an artist whose personality is so crucial to her art, it’s fitting that the introductory booklet opens out as a graphic timeline knitting Björk’s life to music. Taken alongside Vulnicura, Björk’s most explicitly personal album yet (an impulse which she admits she fought against), Archives strives to reveal something intimate about the artist we we first encounter in the intro as a wide-eyed one month old baby.

Housed in a hardback slipcase, the publication is split over four printed pamphlets and a paperback, capturing both the intellectual and the impulsive in her music. The pamphlets deal with the former, containing essays by Alex Ross and Nicola Dibden, as well as an extensive introduction by MoMA curator Klaus Biesenbach, and a revealing and inspirational email exchange between Björk and professor Timothy Morton. The paperback explores the latter in an expressive and ‘psychographic journey through the first seven albums of Björk’ by Icelandic poet Sjón, accompanied by a varied collection of live photos and the costumes that have defined Björk as a performer. As if you needed reminding those seven albums are now also being reissued on vinyl.

A companion to Björk’s discography as much as the exhibition, this curated selection of writings and images also looks as good as it reads. We took a few photos to give you a closer look. Click here for more info and to order a copy. All photos by Arianna Power for The Vinyl Factory.