Tracing the art of New Order in 10 iconic record sleeves 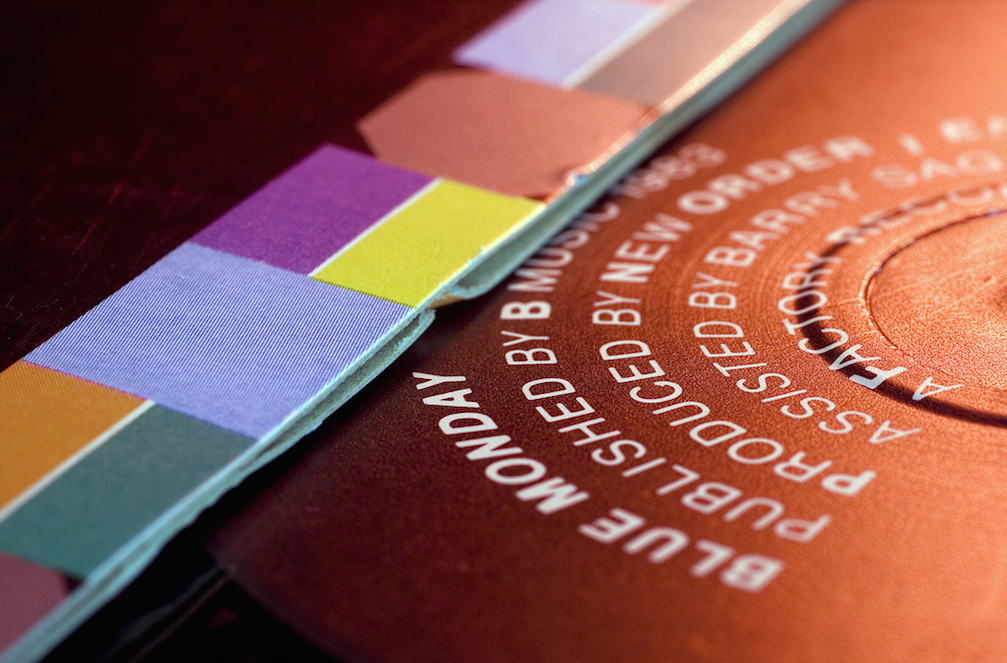 A look back at how Factory Records’ designer Peter Saville captured the shape-shifting visual identity of New Order.

This week New Order release their first collection of new music in a decade. It’s also the first without founding bassist Peter Hook, who rancorously walked out in 2007. Hooky or no Hooky, one thing that’s always stuck is art direction by Peter Saville. Typically bold, the deluxe version of Music Complete is an 8-piece vinyl box set with the new album on double clear vinyl and six coloured records (including a black etched vinyl) housing extended versions of all 11 tracks.

Saville has his print on nearly every New Order release, each time presenting a distinct, ambitious and stimulating vision. Of course most of the band’s output was released on Factory Records, a label impervious to capitalist concerns, like budgets or deadlines. Helmed by Granada TV reporter-cum-Situationist Tony Wilson, who famously signed contracts in blood, Factory Records was a label with a manifesto.

It numbered practically everything it touched, from flyers to records to the Hacienda, emphasising the physical artefact like never before. And Peter Saville was at the heart of that creative process, drawing strong identities for New Order, Happy Mondays and all the rest, often without consulting the bands. “I had the opportunity to make the kind of objects I wanted to see in my life,” Saville told the Guardian.

“Why was packaging important to us? Because the job was a sacred one. Music had transformed our young lives, children of the sixties all. And now we were in the privileged position of putting out records ourselves.” Tony Wilson is quoted saying in Factory Records The Complete Graphic Album.

With this in mind, we’ve combed through the New Order back catalogue to pick out some of the most striking designs. By no means definitive, treat this feature as an invitation to explore the aesthetic of a legendary band and its legendary parent label.

Written as Joy Division but released as New Order, there was no easy way to present the 1981 single ‘Ceremony’. While the name change signalled the intention to move on from Ian Curtis’ tragic suicide, the original artwork for the band’s first 12” was decidedly sombre. Re-recorded later that year with Gillian Gilbert on guitar, ‘Ceremony’ was released a second time with a cream and blue cover, not quite so dark, but just as funereal. When copies of the new sleeve ran out, both the original and re-recorded versions were packaged in the original sleeve, decipherable only by their differing run-out grooves ‘Watching love grow forever’ on the former, ‘This is why events unnerve me’ on the latter.

Already prominent in New Order’s early singles ‘Procession’ and ‘Everything’s Gone Green’, Saville turned to Italian futurism, and specifically Fortunato Depero’s poster for the 1932 exposition Futurismo Trentino for inspiration. Clean lines and strong typography had been visible from 1979’s A Factory Sample, but here Saville imbued each stroke with veiled meaning, subtly adapting Depero’s design. Putting the album’s FAC. 50 matrix number front and centre, the cover is built around the ‘F’ for Factory and ‘L’, Roman numeral for 50, the light blue background of the UK release chosen by the band.

The first appearance of Peter Saville’s ingenious colour code wheel and perhaps New Order’s most iconic sleeve, Power, Corruption and Lies set the paint-by-numbers code against French realist Henri Fantin-Latour’s ‘A Basket Of Roses’ – Saville’s jarring comment on the seductive means by which “power, corruption and lies infiltrate our lives”. Sourced from a National Gallery postcard, the image needed label head Tony Wilson to twist the gallery’s arm to sanction its reproduction. Using the decoder on the back (which you could apply to the ‘Blue Monday’ sleeve too), the colours on the cover reads FAC. 75, the inner sleeve, New Order Power Corruption And Lies.

The biggest selling 12” of all time, ‘Blue Monday’ was also the scene of one the greatest design myths in modern music. Carrying over the colour code wheel design from Power Corruption and Lies, the die-cut floppy disc-inspired sleeve is said to have cost the label more to produce than to sell, with every single copy of the million selling 12” supposedly contributing a loss of up to 5p each. While simpler production methods meant the further represses weren’t so costly, the success of the release took everyone by surprise and running late with the design, Saville is said to have bypassed both band and label to send it directly to the printer. Reflecting the visual aesthetic of the emerging computer world, Saville’s reference to the floppy disc elevated functional design to the status art with almost imperceptibly clarity.

This 12” houses two instrumentals recorded during sessions for the seminal Power, Corruption & Lies album. ‘Murder’ on the A bites at dialogue from films 2001: A Space Odyssey and Caligula while the flip is an instrumental of ‘Thieves Like Us’. The latter was released in its full form earlier in 1984 with a magnificent artwork inspired by Giorgio de Chirico’s The Evil Genius of A King, a metaphysical oil painting from 1914. For ‘Murder’, Saville produced an equally stunning ‘night’ version of ‘Thieves Like Us’. This time we’re inside the building, not outside. The light has changed and the enclosing number matrix is different. You could lose yourself for days, gazing into the window of these works.

Significantly the only sleeve to feature images of the band members, Low-Life marked a visual departure from the graphic-led style that defined their early releases. For a band so reluctant to put themselves front and centre, the skewed portraits were transgressive in their own right. Shot individually on Polaroid film, Saville opted to put the strongest photo, rather than band leader on the cover. That honour befell drummer Stephen Morris, although Saville suspects the band never really believed they’d end up on the sleeve and ultimately resented its production.

Album number four, the schizophrenic one. Guitars on side A, synths on side B; the band’s creative tensions divided neatly into two. Harking back to the Durutti Column sandpaper sleeve and the textured artwork of Unknown Pleasures, the limited version of Brotherhood has a titanium-zinc exterior. The regular version and reissues that followed took the cheaper route (as was often the case with Factory releases) using instead a photograph of the metallic surface.

‘Bizarre Love Triangle’, the band’s break-out US single, was the only track from the album to be released as a single and it was given its own metal identity – rusty with beautiful orange-pink hues. Peter Saville again, the mastermind.

This song originally appeared on the soundtrack to Beth B film Salvation! in April 1987. For its FAC-193 release, the single was reworked by Arthur Baker with a dub take on the flip. Reminiscent of the artwork to ‘True Faith’, the sleeve, oddly frames a seashell, caught mid-air, calm, ignorant of the incandescent object travelling its way. This all makes a bit more sense in light of the title, a reference to the infamous ‘hand of god’ effort by Diego Maradona in Argentina’s 1986 win against England. In typical fashion, Factory Records made a complete show of it, creating 30 promotional footballs in honour of this.

Only ever released as promo, this remix to ‘Run’ from the album Technique was almost instantly deleted after John Denver sued band for its resemblance to ‘Leaving On A Jet Plane’. The sleeve was also a copy, inspired by the design of, er, detergent packaging. The tiny print on the back of the sleeve reads: “Cover by Peter Saville Associates after Bold.”

The original album artwork for Technique couldn’t be more different, modelled on a an antique garden statue of a cherub. ‘Round&round’ from Technique was given a single release with artwork mirroring the album design but instead using a different statue. Replicas of the statue captioned with “Little Lewie for New Order” and “round & round & round & round & round….” written around the base were created and sold to promote the single; another example of the steps Factory took to create original artefacts. Just this week one of these statues sold for $3000 on eBay.

The band’s first album on London Records, following the fall of Factory. You’d be forgiven for thinking this heavily retouched (and hideous) artwork is a by-product of that transition. You’d be wrong though. The sleeve is a Peter Saville and is more a statement about Saville’s situation than the band’s. Saville once said of this time that he “was broke after the recession and it made me look more critically at the world.” Embodying a Hollywood poster, the sleeve depicts Californian life (where Saville had relocated) – you know, people on the beach, people’s houses burning down. Most of the imagery is stock photography which gives it that commercial, airbrushed look. Spin-off 12” single ‘Regret’ also occupies the same blockbuster movie aesthetic with two cowboys exchanging a flame on horseback – a reference to Richard Prince and the Marlboro Man. Again, the elements clash in the frame.

The US vinyl market in 2015 is worth more than Spotify Free, YouTube and Vevo combined