What’s actually going on when people talk about digital vs. analogue masters

We asked three mastering engineers to explain one of the most frequently misunderstood parts of the record manufacturing process.

It’s been 10 years since vinyl sales began taking off again, and for the first time in a decade this summer saw the incredible growth in sales begin to slow down. In the US, that has meant a decline from 38% growth in 2015, to 12% in 2016, to just 2% so far this year. Still in the green, but heading south deliberately.

One of the reasons regularly touted for this decline along with pressing plant delays and rising retail prices, is a generalised perception that quality is dropping, an issue even more generally attributed to using digital masters to cut new records. When talking about pre-digital releases, i.e. reissues, the specific fear is that many are not being remastered from original tapes, but from lower-quality digital sources.

For those of you familiar with Discogs threads, this will seem like old news, but earlier this year, Wall Street Journal directly made the connection between shoddy cuts and falling sales in an article entitled Why The Vinyl Boom is Over, using Gillian Welch and David Rawlings’ decision to cut their own records as a retro-utopian alternative.

While that is probably not the answer either, as long as vinyl is marketed as a higher quality product, its short-comings are going to be exposed. But are digital masters always to blame, or are there other factors at work here?

We asked three of the world’s premier mastering and cutting engineers (of which not many more than a hundred exist) to shed light on what actually goes on in the cutting process.

Let’s start with that general point. What is the difference in quality between a record cut from a digital or an analogue source?

Crispin Murray: The problem is one of quality. ‘Digital’ is anything from PCM [Pulse-code modulation] 44.1 kHz 16 bit up to 384 kHz 32 bit, and higher there is DSD [Direct Stream Digital]. Lower than this there is also MP3 / MP4 that sometimes gets converted back to PCM.

The problems come from lacquers that are being cut from 44.1 kHz 16 bit files, a subset of which is CD masters. There is no excuse for this in this day and age. The minimum quality that should be used is 96 kHz 24 bit. More importantly, this should be mastered for vinyl and not repurposed from CD or download masters.

It is not unreasonable for vinyl to be cut from digital files, providing they are prepared for vinyl, the minimum quality surpasses the analogue source material, and the imperfections of PCM are allowed for.

Loop-O: If done with care, technical understanding of the components involved, and with respect to the music and the media, nowadays there isn’t a remarkable difference between a vinyl record cut using a fully analogue or a digital source and signal-path.

Mandy Parnell: Where we are now with digital audio, it’s really good. When we’re working with artists who are working at 96khz, so say the Max Richter stuff, when you play those files, they sounds really good and some people say it’s even better than analogue because you don’t have all the hiss or the distortion.

Of course, cutting a record we have to bring it back out to analogue because cutting a record is analogue. For instance I use an old EMI transfer console, the VMS74 rack, which then adds harmonics outside of the digital frequency range.

People still have this very romantic view about analogue, and don’t get me wrong, when I came into the industry it was all about reel-to-reel tape and vinyl. I walked in at a time when there was nothing else, and came up through all the first digital stuff and CDs, and I think what we can get now is on par with if you’d gone through analogue tape.

LO: If you’re re-releasing a record from the pre-digital era, I suggest to cut from the original master-tapes, using an all analogue signal-path. Like this, you get a result that’s as close to the original release as possible.

But if it’s a re-mastering or a more recent production from within the last twenty-five years, I cut using a combination of digital and analogue tools. This way, I get the best of both worlds: the texture and sonic depths from analogue tape or tube-gear, as well the precision and transparency from a digital process.

In terms of new releases, if you’ve got a record cut from a digital file with a high bit-rate, will people hear any difference with that of an analogue one?

MP: It depends what you’re listening to. If you’ve got a great recording, of a great performance, and a great mix, then all that is transferred. Ultimately I think what people forget is what we’re actually transferring here. What is recorded audio? It’s a snapshot of the sound, and what we as engineers have to do is try and get the emotional response of the artist to come through onto the record.

LO: With a great sounding master at hand, the actual quality of the record depends on the experience and ability of the cutter, the transparency and settings of the signal-path and cutting-lathe, the quality of the master-discs used and the pressing itself, rather than if the source is all-analogue or partly digital.

MP: I work on digital versions, bearing in mind that we advise clients to work at high sample rates and high bit rates, so we’re getting some incredible sounding files. When we go through to digital I will keep everything at the highest sample rate all the way through and the vinyl is cut like that.

When people complain about pressings and cuts on these Discogs threads, we need to ask who’s cut the record?

So what’s happening behind the scenes when people perceive a lesser quality cut of a record?

CM: Some plants are known to bully labels into supplying a 44/16 file to recut a side at the factory in order to meet the deadline when something has failed in the process prior to pressing. In the worst case, one side of an LP is cut DMM [Direct Metal Mastering] from a 44/16 CD file, where the other side has been cut from a prepared vinyl file at 96/24 or higher.

If you send a file to a factory to be cut, no disrespect to those engineers, but you’re not necessarily going to understand the emotion that the artist and I, with the producer, have discussed that should come across.

As you know, learning to cut records is a long process. When I walked into The Exchange, they said it’s a five year process just to learn how to manipulate the machines, and it’s another five years to hone your skills. I’m 34 years in and I’m still honing my skills.

What’s motivating labels and factories to go down this route?

MP: It’s expense, because if you have factories that are basically saying, we’ll cut it for nothing or we can get it cut cheaper, from the business side of things people are going to go for that. It’s a big problem in our industry now.

We’ve got top Grammy-award winning mixing engineers mixing whole tracks for £200 a track, when they should be paid £3-5,000 for that same work. These engineers in the UK are working for nothing because the public don’t understand the value of music any more. And the industry has just become cheaper and cheaper, so the business side of it will encourage people to go with the cheaper option.

Do you think this short-termism will have a negative effect on record sales?

CM: If the minimum standard is not maintained and the labels, plants, etc., treat the marketplace in a cynical fashion, then the market will also become cynical, suspect they are being conned (maybe rightfully), and become sceptical about making further purchases. You cannot sell something on the ‘quality’ ticket if it does not have that intrinsic quality.

So ultimately, this debate is less about the source of a recording, and more about who has mastered it and how it’s been mastered?

LO: What’s mostly forgotten within these discussions … apart from if the source is analogue or digital, it’s more important if the music sounds the way you thought it should be and leaves enough dynamics for additional processing. If so, the results will be always as good as they can be.

What can be done about this?

MP: We need to educate people. From my side that means educating producers, engineers, record companies or A&Rs. I want to start doing workshops, just to teach people how to quality control a record, because I do it for no money. I lose money on cutting vinyl because my thing is, if we’re going to do this, it needs to be the best it can be. It’s about educating the public about what they’re actually hearing.

Mandy Parnell is founder and senior mastering engineer at Black Saloon Studios in London, cutting records for The XX, Sigur Ros, Bjork, Brian Eno and many more. She has been shortlisted for MPG’s Mastering Engineer of the Year award for the last three years, winning the award in 2015.

Crispin Murray is an independent mastering consultant with over 35 years experience, working with a who’s who of pop and rock music, including David Bowie, Pink Floyd and The Rolling Stones.

Andreas [Loop-O] Lubich is a Berlin-based mastering engineer with twenty years experience. He co-ran the city’s famous Dubplates & Mastering studio for 12 years and now works at Calyx. In 2014 he featured in VF’s short documentary on the Art of Vinyl Mastering. 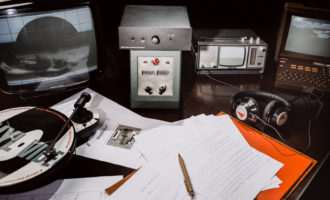 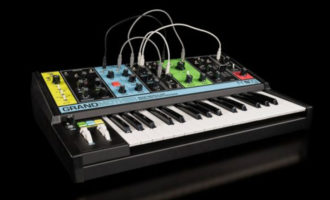 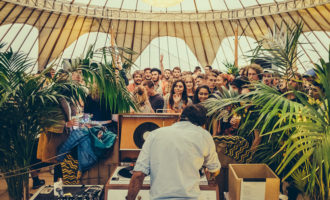