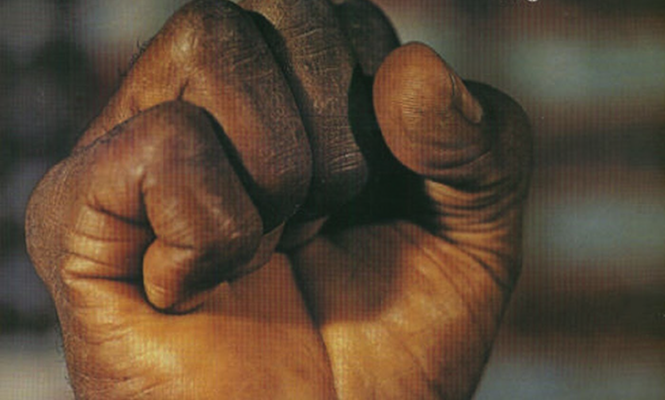 Following our look at the records of the Beat generation, we turn our attention to the emancipatory spoken word of black poets recording in the ’60s and ’70s, whose outspoken activism changed the conversation around Civil Rights in the USA and helped lay the foundations for hip hop in the process.

In the struggle for racial equality in the US, the mid 1960s were a turning point. The civil rights era, 1955 – 65, had produced legislation against segregation, but everyday and institutional racism continued to blight African American life, as did economic deprivation. The black nationalist era, 1965 – 75, was less pacific than the decade which it succeeded and as a result the soundtrack for the new movement was not the folk songs and gospel music of the civil rights marchers, but assertive soul, funk and free-jazz. At the movies, the complementary blaxploitation movement was ushered in by Sweet Sweetback’s Baadasssss Song and Shaft, both released in 1971.

The late 1960s and 1970s also produced an unprecedented amount of powerful, politically-driven poetry. Much of this revolutionary verse was written for live performance and this, together with the poets’ near-universal use of instrumental accompaniment, sometimes by a single conga drum, sometimes by a larger group, meant their work transferred well to disc. The demotic language the poets favoured also helped them reach a broader audience than poetry traditionally enjoyed. On the timeline of emancipatory expression, the revolutionary poets and their musicians are the precursors of hip hop and modern rap.

The ten albums chosen here, a few of them well known, others more obscure, feature some of the most affecting and enduring poetry of the period. You can listen to all the records in this playlist as you read.

But, first, an overture… African American cultural resistance to oppression began with the blues. The literary fightback took off with the Harlem Renaissance which invigorated black artistic expression during the 1920s. Langston Hughes (1902 – 67) was prominent in the movement. While not overtly revolutionary – although it could be said that calling a collection of verse The Glory Of Negro History was revolutionary in itself – Hughes helped light the fuse for the poets who emerged four decades later. The Dream Keeper features some of his finest work, including ‘The Weary Blues.’ Written in 1925, the poem is set in a bar on Harlem’s Lenox Avenue, where a pianist is playing. Hughes’ observation of the musician’s demeanour and body language draws out a broader meaning about the impact of racism on African American life. Fast-forward from The Dream Keeper through the murders of civil rights activists in Mississippi during the late 1950s, and a new wave of African American poets began to emerge, sounding a more impatient note than had the poets of Hughes’ generation. Amiri Baraka, whose influential cultural-history Blues People was published in 1963 (under his birth name, Leroi Jones), was among the first. This mainly-instrumental album, co-led by free-jazz trombonist Roswell Rudd, and released during the same year as the Watts uprising and the assassination of Malcolm X, includes a 12-minute track featuring Baraka reading his early tour de force, ‘Black Dada Nihilismus.’ The Black Voices were Emmery Evans, Ed Bereal, Odie Hawkins and Anthony Hamilton, members of the Watts Writers Workshop founded by the left-leaning, Oscar-winning screenwriter Budd (On The Waterfront) Schulberg in 1966. Half of On The Street In Watts’ tracks were written and performed by Hamilton, who went on to form the Watts Prophets (see below), and use the drum-centric instrumental accompaniment which became the norm for African American performance poets in the 1970s. Standout tracks include ‘Response To A Bourgeois Nigger’ and ‘Funny How Things Can Change (A Prelude To The Constitution).’ The album was reissued on vinyl by ALA in 2011. In 2015, as one terrorist outrage follows another, the Black Panther Party’s love of assault-rifle imagery may seem a step too far. But though the Panthers meant business, their graphics were designed to shock, not incite murder – the party was originally named the Black Panther Party for Self-Defense and more Panthers were assassinated by the police than were ever shot at by Panthers. From 1974 – 77, poet Elaine Brown chaired the Panthers, the only woman ever to do so. Title poem ‘Seize The Time’ was also the title of Panther Bobby Seale’s history of the party, published a year later. Also memorable: ‘The End Of Silence’ and ‘Assassination.’ The album fuses poetry with jazz, arranged by hard-bop pianist Horace Tapscott. Gil Scott-Heron’s debut album includes two of his most well-aimed poems, ‘The Revolution Will Not Be Televised,’ a call for political engagement, and ‘Whitey On The Moon,’ which contrasts the amount of money spent by the US on its space programme with that spent on alleviating poverty in its inner cities. It also includes one of Scott-Heron’s least attractive poems, the homophobic ‘The Subject Was Faggots.’ The album was produced by Bob Thiele, John Coltrane’s producer at Impulse!, who founded Flying Dutchman following Coltrane’s passing in 1967. Probably the best-known album of revolutionary black poetry of its period, The Last Poets – recorded by Abiodun Oyewole, Alafia Pudim (later known as Jalal Nuriddin) and Omar Ben Hassen, accompanied by conga drummer Nilaja – spends as much time berating African Americans for not resisting white racism more effectively, as it does on attacking white racism itself. Poems such as ‘Niggers Are Scared Of Revolution,’ ‘Wake Up, Niggers’ and the heroin nightmare ‘Jones Comin’ Down’ are rightly considered classics. The Watts Prophets
Rappin’ Black In A White World
(ALA, 1971)

After recording On The Street In Watts, Anthony Hamilton formed the Watts Prophets with Michael Dedeaux and Otis O’Solomon. Conservative commentators, black and white, were enraged by Rappin’ Black In A White World. They particularly objected to “Amerikkka,” which took John F. Kennedy’s exhortation in his 1961 inauguration speech, “Ask not what your country can do for you, rather ask what you can do for your country,” and recast it as, “Ask not what you can do for your country / ‘Cause what the fuck has it done for you?” The production features piano and bass accompaniment, the piano played by Motown songwriter Dee-Dee McNeil (The Four Tops, Edwin Starr, Diana Ross). Saxophonist Archie Shepp is also a poet and playwright. Side one of his 1969 album Poem For Malcolm, on BYG Records, had Shepp reciting a eulogy for Malcolm X. It’s a decent poem, but the Attica Blues suite is Shepp’s poetic masterpiece, although it’s stretching a point, maybe, to call an oratorio a poem. Performed with a large band featuring the cream of the contemporary New Thing jazz-movement, the piece was inspired by the 1971 prisoners’ rebellion at the State Correctional Facility in Attica, New York State, during which guards and state troopers shot dead 39 people, most of them African Americans. Lyrically and musically, Attica Blues contains some of Shepp’s fiercest work, as well as some of his most tender. Jayne Cortez is relatively well-represented on vinyl, thanks in part to setting up her own label, Bola Press, in 1980. Her Strata-East debut covers subjects including police harassment (‘Lexington Street Stop’), a lynching in New York (‘Lynch Fragment’), and the fatal shooting of ten year old African American Clifford Glover by a white undercover policeman in New York in 1973, for which the policeman was acquitted on all charges (‘Homicide’). The poems are performed in duet with bassist Richard Davis (Eric Dolphy, Rahsaan Roland Kirk, Jaki Byard….and Van Morrison’s Astral Weeks). For ten years, Cortez was married to Ornette Coleman, and was the mother of drummer Denardo Coleman.