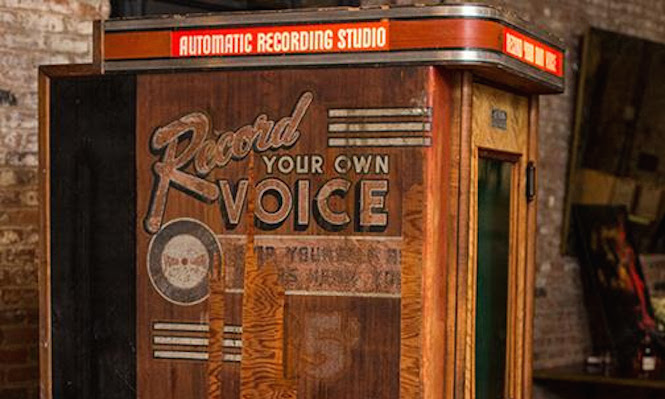 65 seconds on 6″ vinyl with the iconic Voice-O-Graph.

For two weeks this October, Aberlour‘s vintage 1942 Voice-O-Graph recording booth will be in-store at Phonica Records in London. The public are invited to record themselves for an intimate 65 seconds, with the sounds then pressed onto 6″ vinyl within minutes.

Built in the 1940s, the Voice-O-Graph represents one of the earliest forms of recording, enabling users to record song or spoken word onto 6” vinyl. From budding musicians and hopeless romantics to wartime mothers recounting news to far flung siblings, the Voice-o-Graph was used to capture these special moments.

The booth also made the jump into popular culture, cropping up in a number of films over the past sixty years, notably Badlands where Martin Sheen can be seen making a record in a 1957 incarnation of the booth.

Crate digger maestro DJ Shadow used a sample of a Voice-O-Graph recording in the track ‘Letter From Home’ from 2002’s The Private Press. And obviously Jack White owns his own Voice-O-Graph.

Now it’s your chance to put something down in this legendary booth. From Tuesday 20th October to Monday 2nd November, the unique recording facility is available to experience at Phonica, free of charge.

More information on the Voice-O-Graph and its availability will follow on the Phonica blog next Tuesday. Incredible photos from inside a Peruvian vinyl factory in the '70s