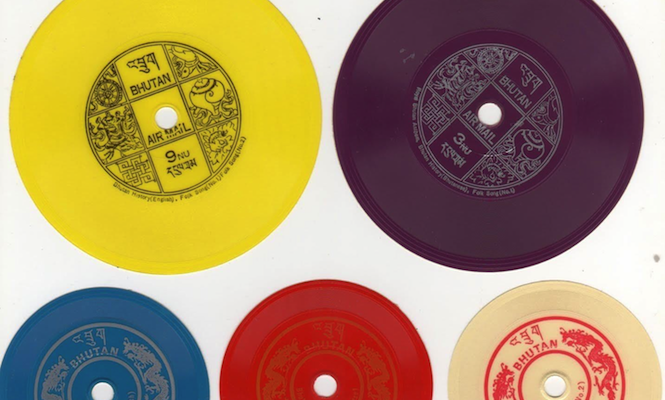 Made of plastic and embossed with a melody, these tiny record stamps are among the strangest, most enchanting bits of vinyl out there. Chris May investigates how the Buddhist Kingdom of Bhutan came to produce the world’s “first talking stamps”.

Quite possibly the smallest vinyl records that can still be played with a stylus, those of you after a set will be happy to know the stamps still sporadically appear on eBay, with prices pushed up by that geekiest of venn diagrams between stamp and record collectors.

Listen to a haunting version of the Bhutanese national anthem, as recorded from a stamp, below.

If you’re looking to make a smart investment in vinyl, among the most promising items to look out for right now are a set of Bhutanese talking-stamps. Issued in 1972 in a set of seven, the stamps are miniature, one-sided, 33 1⁄3 rpm vinyl records playable on a standard turntable. You peeled off the backing paper and stuck them on an envelope or postcard. Content includes Bhutanese folk songs and histories of the country in English and Dzongkha, the local language.

For decades, the stamps were dismissed by the philatelic establishment as tacky novelties and were, correspondingly, as cheap as chips. In 1993, when they were first listed in the collectors’ bible, Scott’s Standard Postage Stamp Catalogue, a mint condition set was valued at around £17, the equivalent of £28 at 2015 prices. But following their recent discovery by collectors of rare vinyl, particularly in the US, you will be lucky to pick a set up for less than £300. Some observers predict the price will double, or even triple, over the next few years. Bhutan’s talking stamps were the invention of the American adventurer Burt Todd, who was born into a wealthy Pittsburgh steel-producing dynasty in 1924. Appropriately, this was the same year F. Scott Fitzgerald completed The Great Gatsby, for the globe-trotting, airplane-piloting, big game-hunting Todd resembled the novel’s protagonist. Todd’s many other quixotic ventures included setting up a rum-making distillery for the government of Fiji, and buying the Rolls-Royces belonging to Indian maharajas who had been impoverished by the loss of British subsidies when the country gained independence, reselling them on the international classic-car market.

After wartime service in the US Army Air Corps and keen to avoid, or at least delay, joining the family business, Todd opted to enrol at Oxford University. Lacking the required qualifications, he was told that the only person who could authorise his enrolment was in rural Norway on his honeymoon. Todd flew to Norway, tracked the man down and enrolled. He graduated in 1949 with a degree in law. At Oxford, one of Todd’s friends was Ashi Kesang Choden-Dorfi, the future queen of Bhutan. In 1951, Choden-Dorfi invited Todd to Bhutan for her wedding to King Jigme Dorji-Wangchuck. There were no airfields in Bhutan, and few roads, and Todd had to travel much of the way from India on foot and horseback. His account of the journey appeared in the December 1952 issue of National Geographic magazine. Two years later, he honeymooned in Bhutan.

In the late 1950s, Dorji-Wangchuck asked Todd to help Bhutan raise a $10m loan from the World Bank. Todd went to Washington to lobby the bank, but the loan was refused: Bhutan was in a border dispute with its larger neighbour India, with whom the bank wanted to keep on good terms. But an official suggested Bhutan raised the money by issuing postage stamps, as had other small countries such as Monaco. In 1960, with a royal warrant to set up Bhutan’s stamp-issuing programme, Todd founded the Bhutan Stamp Agency. His programme started out conventionally with designs featuring such exotica as the Bhutanese royal crest, a yak, a maharaja, a Himalayan fortress, a soldier from the royal bodyguard and a Buddhist monastery. The designs were pretty but lacked enough novelty to get noticed on the world stamp-collecting market. Todd realised that to sell large numbers of stamps he needed a more attention-gaining approach.

Todd’s first innovation, in 1966, was a circular stamp marking the 40th anniversary of Dorji-Wangchuk’s coronation, using a heraldic design embossed in gold on rainbow-coloured paper. It sold well. Next up was a series of triangular stamps featuring the yeti, the Himalayas’ fabled abominable-snowman. In 1967 came a set of 3D stamps on the theme of the space exploration; Todd’s stamps showing astronauts and rockets were laminated on prismatic ribbed-plastic and gave a convincing 3D effect. Over 200,000 sets were sold. Other successful issues included a set of Buddhist banners printed on silk, a set of traditional sculptures die-stamped in plastic, perfumed stamps and stamps made out of steel foil. Todd passed in 2006, but his flair for innovative stamp designs ran in the family. Shortly before he died, his daughter Frances notched up another first with a series of CD-ROM stamps carrying documentary videos about Bhutan.