By Lewis Gordon in Features September 1, 2022

Before Bandcamp or Soundcloud, homemade music was the concern of a decidedly committed group of artists. Now, reissues are helping these cherished, sometimes challenging releases find a new audience.

As a term, it’s beautifully inclusive — more so than “vanity pressings”, another commonly used descriptor for these self-released and self-financed records. Major’s is one that hones in on the human dimension that can often be lost amidst the managerial and commercial decisions of corporate-sponsored music.

His definition also accommodates the fact that there is no defining sound of these “homemade” records. Rather, there’s a shared ethos and belief that cuts across a constellation of mostly 1960s and ‘70s albums whose styles were as diverse as music itself.

From psychedelic disco bands to pizza parlour organists and religious cult leaders, these DIY artists were united by the conviction that their music deserved to be heard, at least by a few people, and they were willing to foot the bill in order to make this happen.

Listen to a few of the tracks on Down & Out, a new NTS compilation of so-called “loner folk” music and you’ll perhaps appreciate why labels might have been unwilling to fund such music.

On Bill Clint’s ‘Sometimes Angels Don’t Need Friends’, for example, there’s an extended section of sobbed lyrics which arrive at the end of an epic 11-minute folk song. On ‘Soupirs’, Richard Forestier breathes heavily over gently plucked guitar. It feels uncomfortably, experimentally intimate as the French artist pushes his listeners to the extreme of what they might tolerate.

On a video call, Samuel Strang, one of the curators of the compilation alongside Bruno Halper, enthuses about its “bleak and eerie” qualities, a counterpoint to the “more melodic and traditional” songs by artists such as Cornish folk duo, Brenda Wootton and John The Fish.

As is often the case with such compilations of private press music, the title and context offered by modern curators risks glossing over not only the idiosyncratic qualities of individual tracks and artists but history itself. 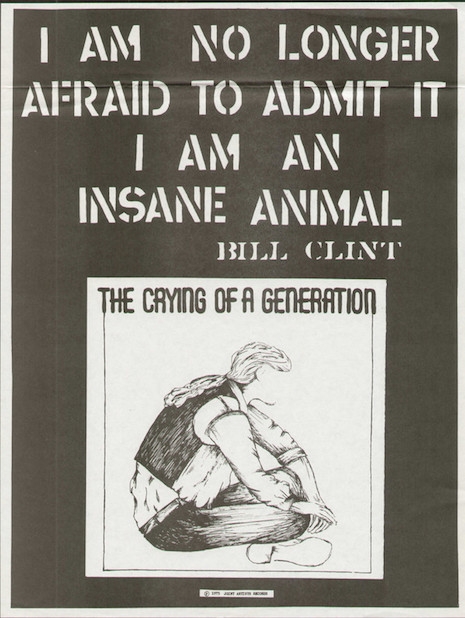 Strang admits the “loner folk” songs that comprise Down & Out are made by a mostly disparate group of artists who, on the whole, had little sense of their peers’ existence. But a thread still runs through this compilation of decidedly outsider guitar music, all the way from break-up song ‘High & Dry’ by Hooknorton to the explicitly morbid ‘Merely Gone’ by Harry Waler.

“Taking a world as broad as we did with this compilation, it’s about trying to find the same kind of romance running through what you’re tying together,” says Strang. “You’re also trying to be respectful that all of this music exists as part of broader pieces.”

While the musicians and relatives Strang and Almer were liaising with were happy with the retrospective umbrella of “loner folk,” for others the compilation’s breadth was too much of a stretch.

“I was speaking to one artist about a wonderful piece of music from the mid-60s,” says Strang. “In a last-ditch attempt, I sent the rest of the music on the compilation thinking it would be a strong advertisement for why he should want to be part of it — that it reflected a broad church. He literally texted back saying: ‘What is this music? This has nothing to do with me.’”

There’s a delicate art to curating the sounds and scenes of the past.

“There’s a kind of unspoken thread that runs through that label that has always felt punchy to me,” says Strang. That said, he suggests the compilations are, ethically, at least, “completely fucked up.” The tracklists are often entirely anonymous, comprised mostly, as far as Strang can tell, of MP3 rips.

The opposite of Light Sounds Dark’s entire recontextualisation approach is the preservation efforts exercised by labels such as Numero Group, Light In The Attic, and, a relative newcomer to the reissue scene, Freedom To Spend.

Co-founded in 2017 by Matt Werth (also the label head of RVNG Intl.), alongside Pete Swanson and Jed Bindeman, Freedom To Spend scored a big success with its reissue of Ernest Hood’s seminal 1974 ambient-jazz album, Neighborhoods.

As Werth explains over Zoom, the reissue of the famed private press album was the product of intense multi-year talks with the Hood family, members of which, including his son and daughter, Tom and Laurel Hood, are still based in Portland, Oregon. “We were just really patient,” says Werth. “You never know what histories are attached within those familial realms. It can be complicated, so you have to be very sensitive about everything.”

A testament to the label’s ongoing relationship with the Hood family, Freedom To Spend is set to release what Werth describes as a “lost album,” titled Back to the Woodlands, which was discovered alongside the original tape reels of Neighbourhoods.

Like that dreamy, proto-ambient album, a large part of this “new” release is made up of field recordings that Hood initially recorded for people who were unable to leave their homes, either because they were disabled or for other reasons entirely. The label is also in talks with the Albina Music Trust to preserve Hood’s music archive that includes his own original output as well as recordings of local artists, including Black performers in local jazz clubs.

As Werth stresses, Hood was a “huge audio historian in Oregon.” Indeed, what’s wonderful about Hood’s output, including his self-released album, is the extent to which it challenges notions of “loner” folk, outsider art, and the “private” press. Hood might not have enjoyed label support but that didn’t mean he was any less of a public figure in his local area. He was an artist deeply embedded within a rich musical community.

What separates Hood and the Down & Out artists from modern self-releasing musicians is the relative technological ease of music-making and its distribution today.

Nowadays, anyone can upload their bedroom-made tracks to Bandcamp or Soundcloud and share them as they please. But for much of the 20th century, the barriers were simply prohibitively high for most people.

Recording these records, pressing them, and creating the artwork, was unwieldy, expensive work. It required huge effort, and so, naturally, only the most committed and fervently devoted (or flush) did so. Perhaps as a result, there’s an integrity that shines through in these works that were often born against extreme odds.

If there’s a contemporary equivalent to private press records, perhaps it’s the beautiful, often handmade, and increasingly collectible cassettes that you find on sites like Bandcamp and Boomkat.

“I do wonder if some of these editions will become the holy grails 50 to 60 years from now,” says Werth.

Like the private press artists of the 20th century, DIY artists of today are also makers of Major’s “real people music.” For Werth, the term is one that resonates on multiple levels throughout the decades. “It’s for real,” he says. “It’s realising music beyond a personal audience to another one. I think that takes real charisma and real gumption.”

Albums to look out for this September