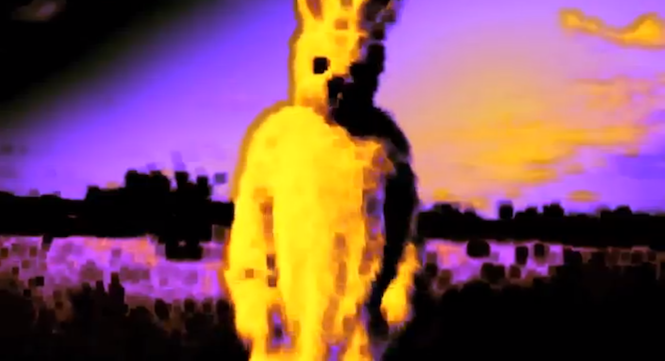 What happens when you put a renegade artist and techno producer in a rabbit suit, give him a shotgun and a flare and let him loose in the English countryside? Premiered this week, the 6 and a half minute “Director’s Cut” of Dinos Chapman’s ‘LUV2H8’ is the latter day producer’s first music video proper and hints at his forthcoming audio/visual Luftbobler show which will be emblazoned across a triptych of screens at London’s Fabric on 17th October.

A warped post-apocalyptic vision of the Duracell bunny running amok on acid, the video for ‘LUV2H8’ is Chapman at his irreverent best – a darkly humourous, visually arresting escapade to a throbbing and paranoid techno soundtrack.

Watch the video below, order the EP from our online shop or buy tickets to the a/v event here.

Earlier this week, Dinos Chapman joined the Record Club to pick his 8 favourite records on the theme of “Love”. Who’d have thought he was into Lana Del Rey?