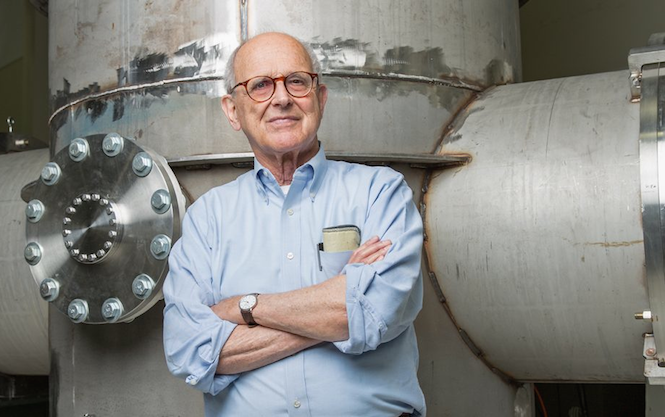 Fifty years ago, Rainer Weiss, an MIT professor emeritus, dreamed up a way to detect faint invisible ripples in space as predicted by Einstein’s theory of general relativity. That dream became a reality last September with the Laser Interferometer Gravitational-Wave Observatory (LIGO), two massive antennas that detected waves from black holes as they merged into each other a billion light-years away. For the breakthrough, Weiss is tipped to win the Nobel Prize in physics next Tuesday.

LIGO’s success hinges on tuning out “noise” that could obscure the rumble of a gravitational wave. Interestingly, Weiss traces his interest in the field back to his childhood, when he became obsessed with the hiss and scratch of his parent’s shellac records.

Read Next: The physics of vinyl – the science behind how a record works

Aged 12, he was scouring New York City for electronic parts – transformers, capacitors, vacuum tubes – and skipping school to read books in the library. “As a kid that was mind-boggling. You bought stuff for nothing at all. If you could lug it on the subway home, you got it. I started making all sorts of stuff, radio, hi-fi sets which didn’t exist,” he said to PRI.

Soon he was building hi-fi systems from scratch that had his parents’ friends lining up down the street to buy them. “We would hear the New York Philharmonic, and these people were just blown away. Imagine, they said ‘[music] like in the concert hall!'”

But it was Weiss’ fixation with vinyl’s background noise that drove him to college. “Everything was wonderful if you had an FM set, but vinyl wasn’t there yet. It was shellac records that made that horrible [scratching], 78s. All you heard was that goddamn record scratch! So the thing was, how do you get rid of that? And that was a puzzle that was just beyond me. I couldn’t do it. I didn’t know enough math, I didn’t know enough real electrical engineering… Let’s face it, I wanted to solve that problem.”