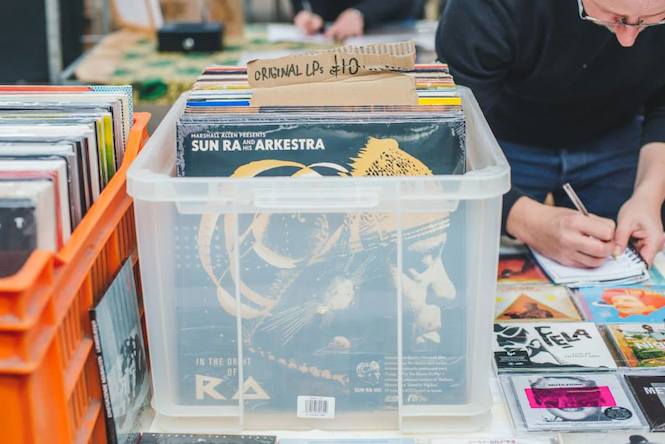 London’s enjoying a strong record fair culture at the moment with local markets cropping up in Hackney, Peckham, Kilburn and most recently Elephant & Castle. On that circuit of course is Independent Label Market whose semi-regular gig at Spitalfields has become an established fixture for record collectors. Shoreditch might be home turf but ILM has never been afraid of spreading its wings: pitching up in Glasgow, Berlin, L.A. and Toronto to champion local labels and give collectors the chance to pick up A-grade records.

For its latest instalment ILM heads to Britain’s West Country to take on Bristol. The debut market will showcase the cream of Bristol crop; Hypercolour, Idlehands, Futureboogie, RWDFWD, Ghetto Funk, Rise Audio, Turbo Island Tees, Astro:Dynamics along with Heavenly, Caught By The River, Black Acre, Ninja Tune, !K7, Strut, Hospital and a number of other labels from around the UK. As ever, crates of jaw-dropping records including exclusives, signed vinyl, rarities, test pressings and advance copies will be available exclusively at the market.

With so many top records on offer, we’ve drawn up this shopping list for Bristol punters:

– Strut: Previously unreleased Sun Ra and his Intergalatic Research Akerstra album Planets Of Life Or Death recorded in Amiens in 1973.

– Heavenly: Limited copies of the Temples lenticular 12″ Beyond The Wizard Sleeve remix album.