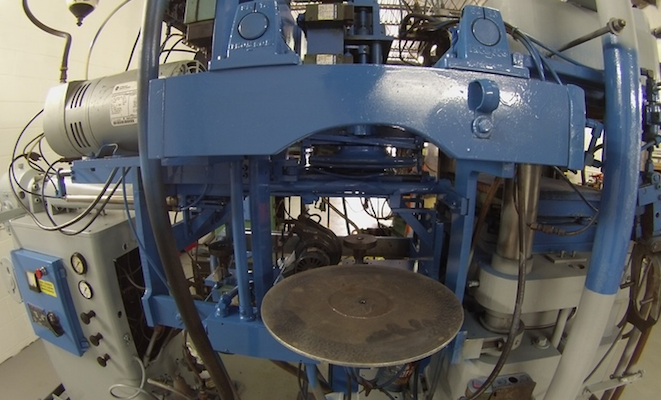 Music industry impresario Will Socolov is building a new record pressing plant in Brooklyn, New York City. Currently seeking funding on Kickstarter, Brooklyn Vinyl Works will restore out of service presses to run a 24-hour manufacturing plant that will include a glass wall through which visitors can watch the records being made in person.

Responding to the high demand and increased turn-around times for vinyl manufacturing in the industry, the new plant has turned to Kickstarter for help. Having already secured the location, Brooklyn Vinyl Works is now seeking funding for a number of factory specifics (new boiler, shrikwrap machine, hydraulics) as well as for the acquisition and restoration of additional record presses.

Watch the pitch below:

Rewards for backers include everything from BVW tote bags to exclusive Sleeping Bag prints and the opportunity to have your own records pressed at the plant.

After founding iconic NYC house and hip hop label Sleeping Bag Records (which he founded with Arthur Russell in 1981), Socolov spent ten years running vinyl pressing plant EKS Manufacturing who pressed records for the most important independent labels in the US including DFA, Sacred Bones and Daptone.

You can read more about the Brooklyn Vinyl Works project and show your support on the Kickstarter page, or follow developments on the their website.