How much do market research teams really know about you?

You’re a man, early forties and you live in Glasgow. You’ve got a bit of spare cash this month, so on the way home from Sainsbury’s with a Taste The Difference curry and a four-pack of Strongbow in the back, you park your P-reg Honda Civic on a double yellow and nip into the local record store to have a quick scan of the second hand rock crates and pick up the new issue of The Wire. Pleased to have found out that there’s not only a new series of Twin Peaks on the way but they’re reissuing the original soundtrack on vinyl in early 2015, you head home, hang your denim on the door, feed the fish and settle in for a night of Great British Menu. According to polls and market research company YouGov, you are the archetypal record collector.

Having just wasted our lunch breaks fiddling around with their new profiler tool, which allows you to explore qualitative information about fans of all sorts of brands, activities and organisations, we thought we’d throw this open to the floor and see just how accurate YouGov have been at capturing the soul of this most particular of demographics.

Unsurprisingly, given the level of autonomous choice involved, record collectors typically would rather avoid instruction, relying instead on their own nous and curiosity, gleaned from working in entertainment and media industries and free-time split between hanging about on the internet and going to gigs.

Keen to describe themselves as alternative, independent and open (and youthful, perhaps betraying the mid-life crisis age category), you won’t be surprised to hear that negative characteristics include self-absorption, as well as a tendency to be both withdrawn and gloomy. Subsequently, the record collector’s pet of choice is a fish. Many also see themselves as disorganised, although that’s probably relative.

However, given the sample size for YouGov’s poll is a measly 65 people, perhaps the most striking assumption to be made is that although the country is apparently now awash with vinyl and budding young collectors, few are willing to identify with the stuffy old record collector tag. You can explore the findings in full here.

Want to set the record straight and take part in a real survey about collecting vinyl, and be in with a chance of winning a tour of The Vinyl Factory record pressing plant? Take our Vinyl Survey now. 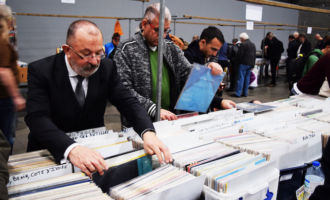