There’s a tricky contradiction at the heart of Visionist’s Value, presented in one form as a limited edition 100-run, in which the record is clad and sewn shut inside a fabric pouch. To access the music, you must destroy the object, and with it, its re-sale value. Leave it closed and the album has no intrinsic value at all. As Louis Carnell aka Visionist says, it “creates a context where you find yourself paying more for the music but also a product, you may want to buy twice, in the case that something sealed indicates a more precious item.” Before you’ve even heard the record, Visionist asks the question, what experience do you value more?

Following up his debut on PAN, Visionist’s Value tries once more to be underpinned by a rigorous conceptual framework, and one which is given full rein on the limited edition. “Every detail in the packaging was considered from the colour of the vinyl to the texture of the card used,” he says, all in the service of Value’s mains themes: “self-discovery/self-reflection enforced by myself or by experiences forced upon me.” 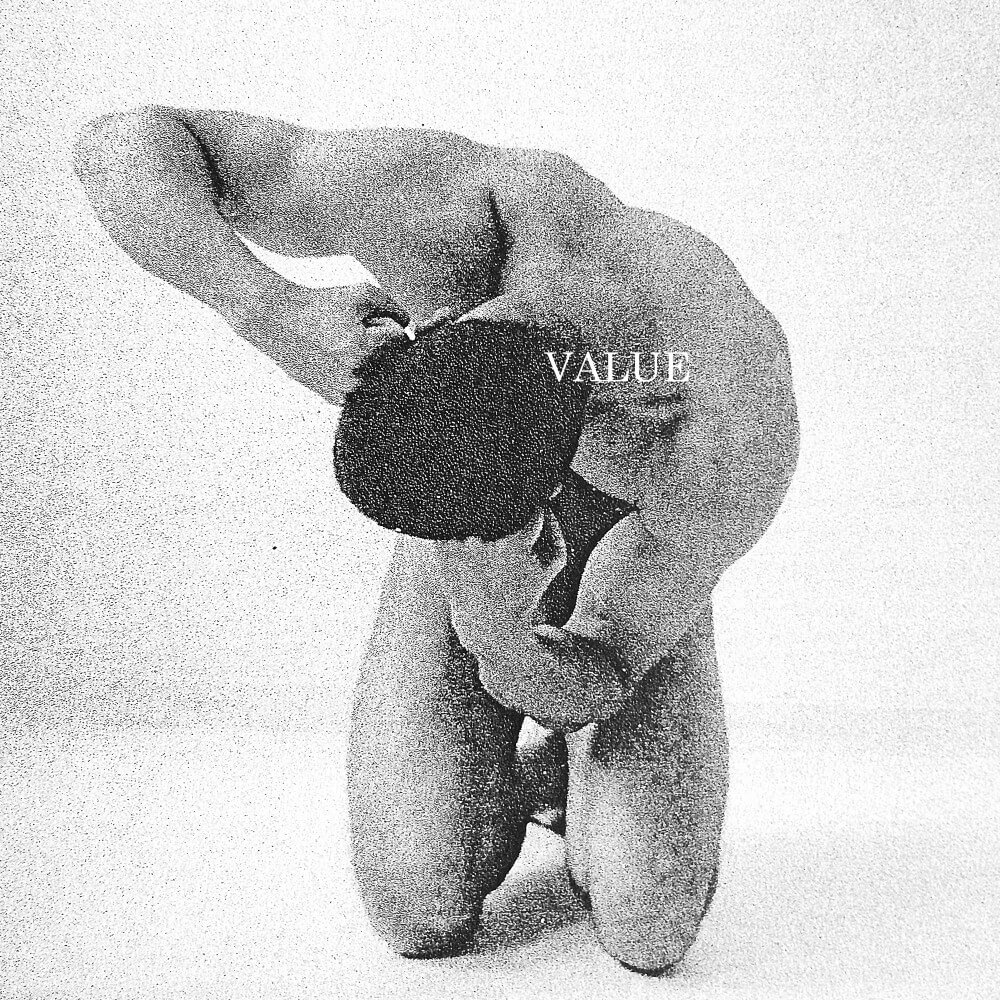 For this he put himself front and centre, enlisting artist Peter De Potter, who was also responsible for Kanye West’s Life Of Pablo sleeve to capture the producer in poses that evoke the dual strengths and vulnerabilities of masculinity. Young fashion designer William Francis Green was then brought on board to realise these ideas on fabric, adding a dynamic cross-disciplinary feel to the project.

“As a society it is easy to feel things of more expense are more important, but also that once you’ve spent on an item you should give it extra care,” says Carnell. “This is attitude that I want listeners to take with my music (extra care, time), even the process of opening the item already adds an extra delicacy to my work.”

We spoke to Green about how he went about designing the sleeve, which is out now via Big Dada. 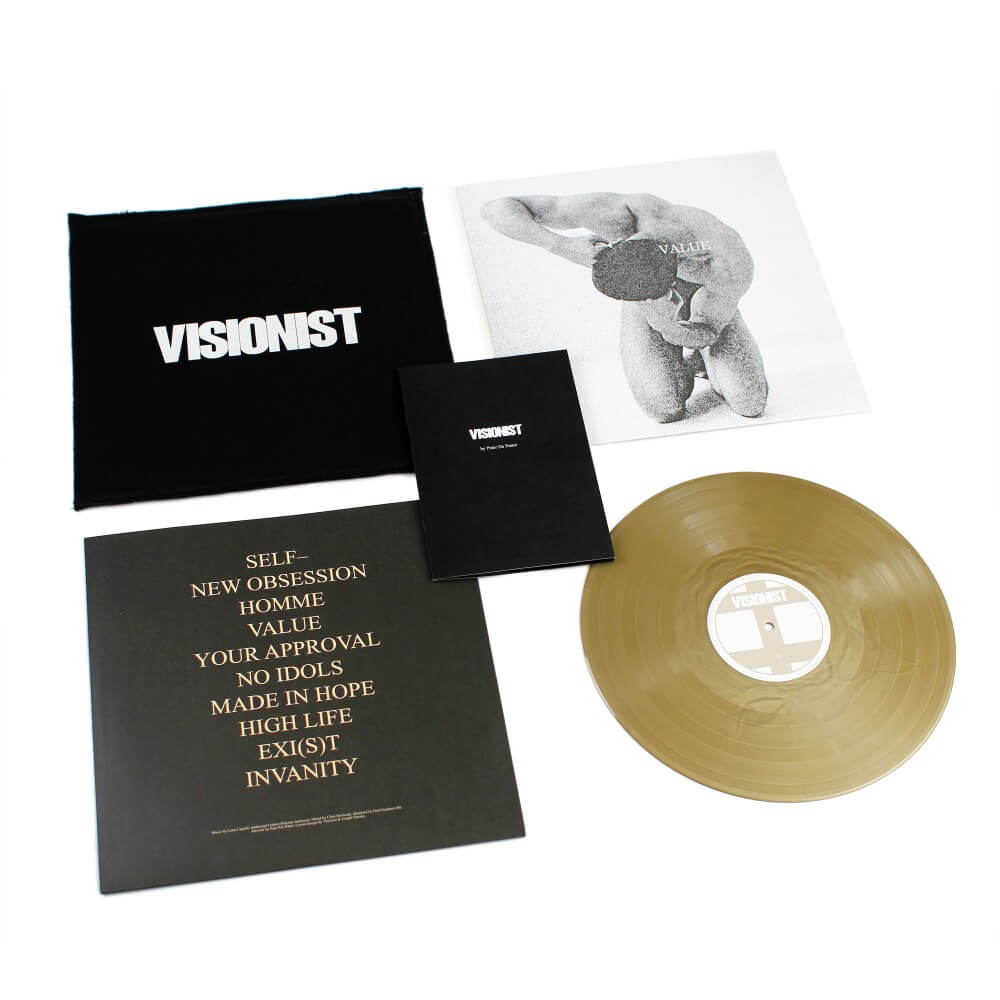 It started with conversations between me and Louis, exchanging different ideas about how music should be delivered today. I then designed and prototyped various different ideas until we settled on one that suited.

The manufacturing of the cases was then done entirely by myself. It starts with the printing of the front, back and inner patches separately and then cut to size. The pieces were then assembled and stitched together with the vinyl inside. It was important that all parts of the process were done by myself – it keeps the project as unique as possible and as with Visionist’s music which he pours a lot of personally into, it made sense that I should do the same. 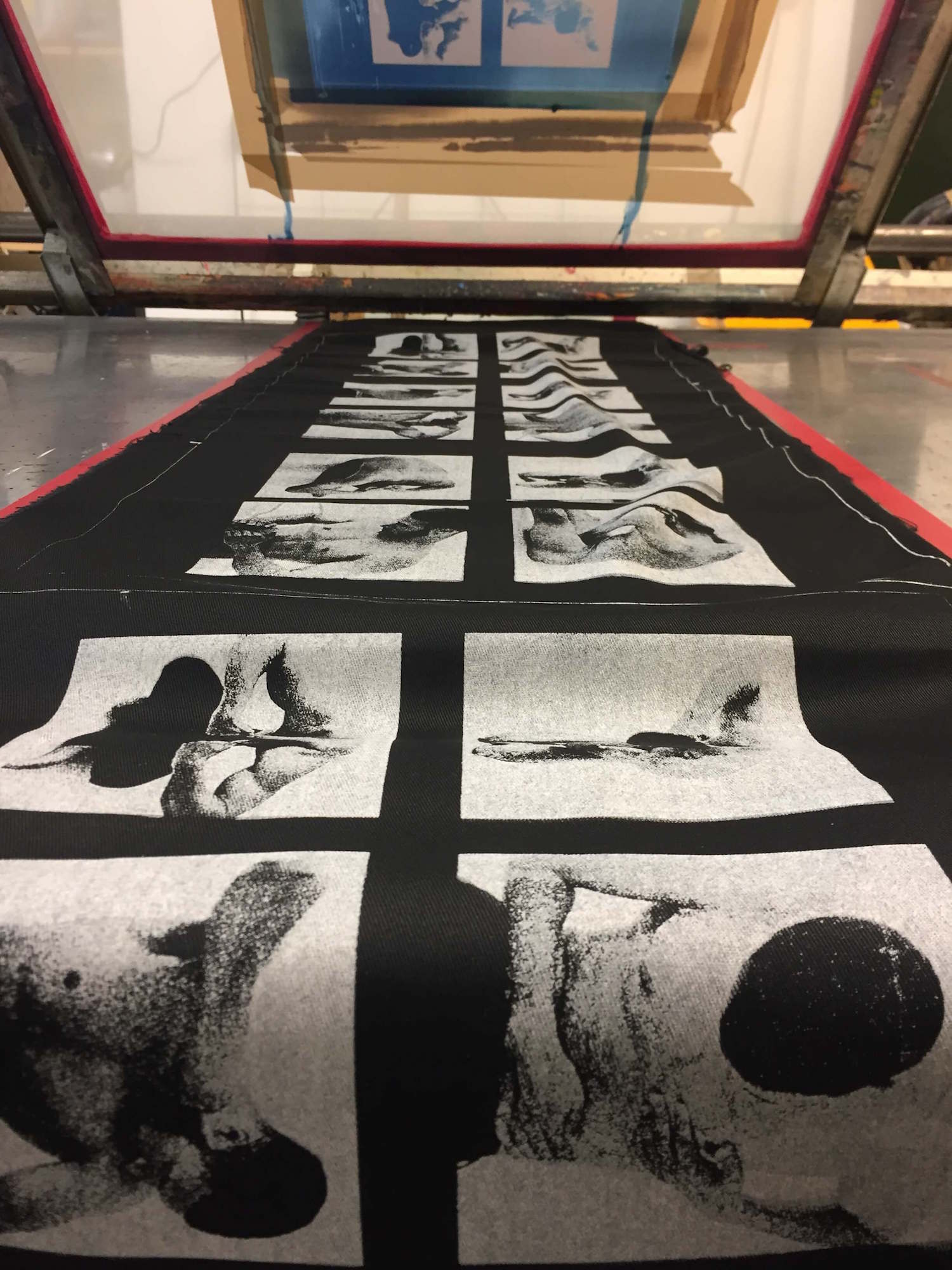 There’s obviously a fashion element of clothing the record in using fabric. Did anything in particular inform your desire to apply that to the record sleeve?

Anything I put my hand to now is somewhat a derivative from my fashion background. The choice of material was definitely a product of my understanding of textiles being a medium I’m comfortable with. Fabric can be a lot more versatile than card. We want people to take the prints and create their own interpretation of it. Also Peter’s work is often adorned on clothing [for Raf Simons etc] so it was well suited to what we were trying to achieve.

It was fun to have a opportunity to create something with a purpose, other than clothes, from fabric. This is my first time creating product and is very eye opening to apply functions I would employ in fashion into another field. 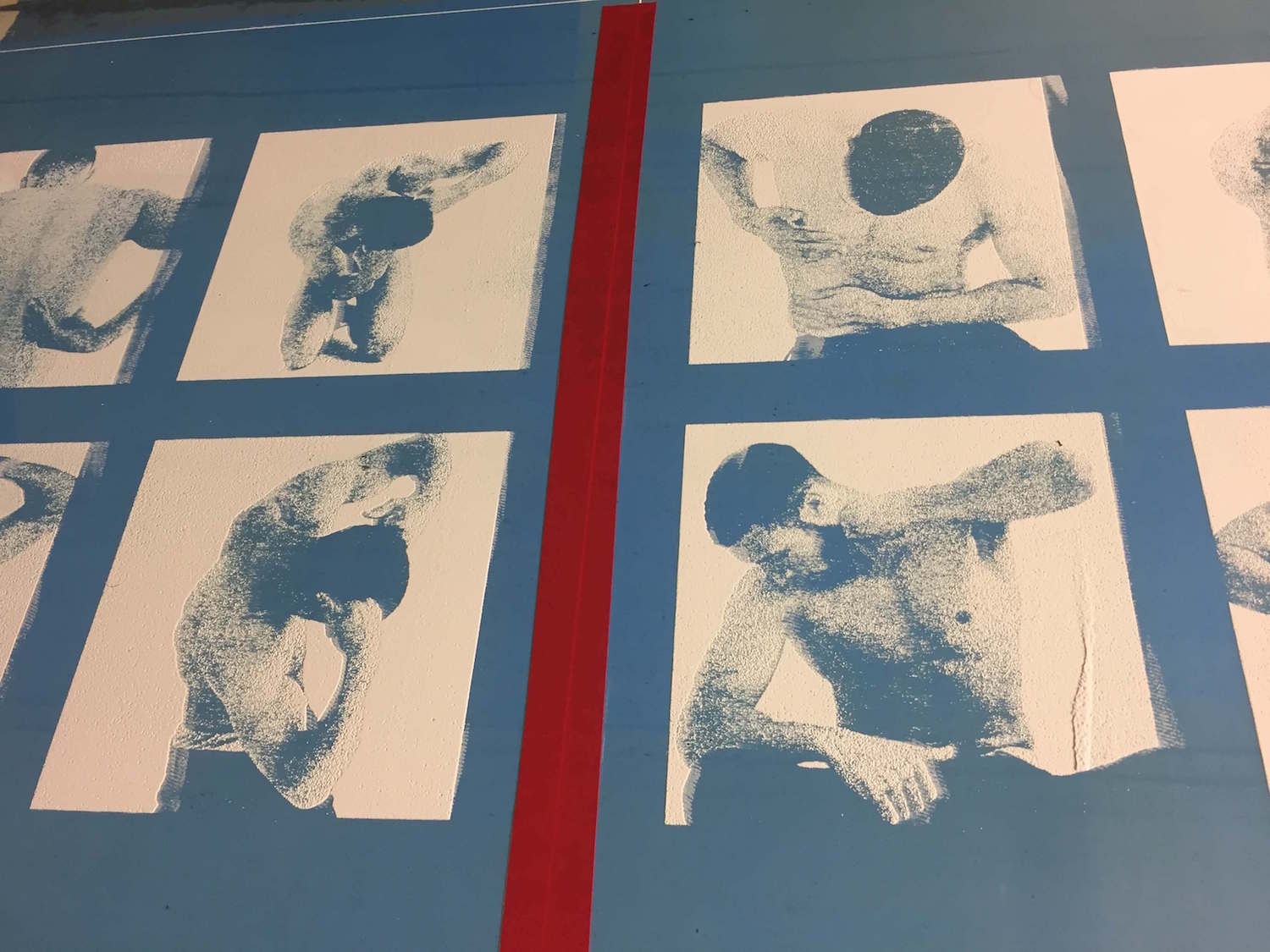 Even though the form is different, are there similarities here with the way you work normally?

I’m really inspired by the arts and crafts movement of the 1800s. It’s how I have come into projects like this where the entire design, print and production process is done by the same person. I believe this way of working is the most sustainable and valuable methodology that all artists/designers in the creative field should be employing today. Extorting cheap labour for the sake of a lower price tag and higher return fuels laziness and un-authenticity.

There’s also something pretty punk about having to destroy it to get inside. Was that the intention? 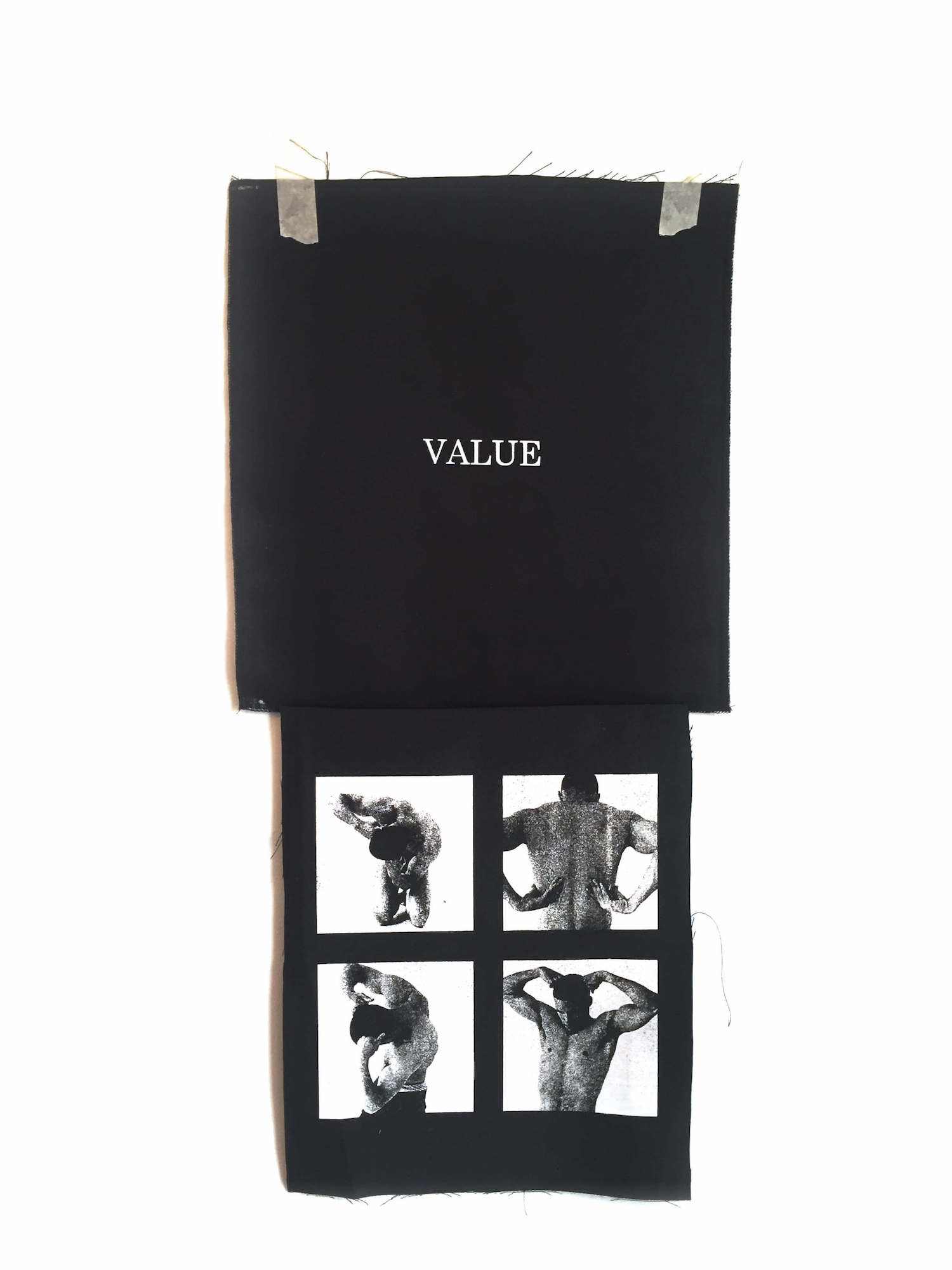 What about the images used on the inside flap. What’s the story there?

The images of the patches, and the whole of the Value project were taken by Peter De Potter – an exceptional artist who I’m humbled to have worked with. They are all these vulnerable/macho shots of the musician, which again reflect the concept of the music.

There are 10 images in total, each representing a different track on the album. Each case holds 1 of 3 different variations of these 10 with it being a random draw as to which set you will receive.

Did you work with the music in mind?

The music itself wasn’t so much an inspiration as the concept was. Louis’ idea of subverting the word Value is clever and continues through the packaging. With it being the deluxe edition of the vinyl, the most expensive version you can buy, the fact you have to destroy the piece in order to access the content inherently affects the product’s monetary value. The fact you have to destroy the piece, gives the consumer the opportunity to redefine its value. I encourage the consumer to reuse the case as patches, pockets, hangings etc.

Visionist’s Value is out now on Big Dada. Get your copy of the limited edition and standard vinyl releases here.