It’s 1949 and young BBC engineer Daphne Oram is masterminding the world’s first piece of live turntablism. It was never performed. Until now.

Move over Grand Wizard Theodore, this girl got there thirty years before you. As a composer and studio engineer, Wiltshire-born Daphne Blake Oram was a trail-blazer in a male-dominated world that regularly undermined and overshadowed her successes.

Here was a woman who co-founded the BBC Radiophonic Workshop, manipulated recorded sound on tape and record like no-one before her and developed ‘Oramics’, a system of creating electronic sounds that pre-dated Robert Moog’s synthesizer by several years. In the words of Shiva Feshareki: “A radical composer who was working at the same time as Stockhausen but here in this country.”

“And yet I had never heard of her,” she continues. “[Oram was] a woman who instantly became my role model.” 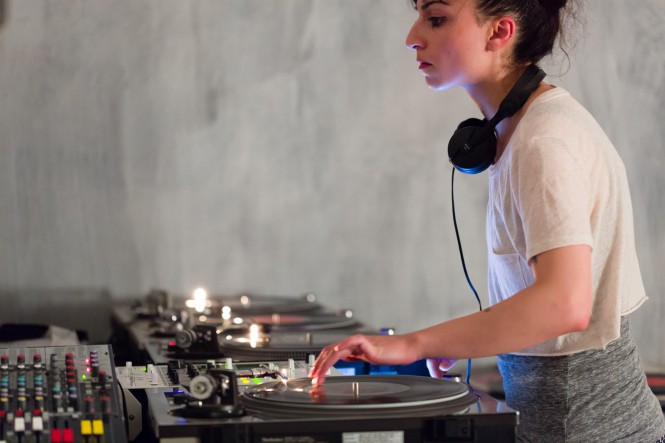 Coming from a classical background, the turntable was not an immediately obvious choice of instrument for Feshareki, but simply one which felt right. In Oram she found a context for her work which has inspired her forthcoming performance of that earliest of turntable experiments. Stashed away in a box of pencil draft manuscripts, Still Point was written in 1949 for double orchestra, microphones and three pre-recorded 78 RPM discs. Or as Feshareki explains, “arguably the first ever piece of music to require the live electronic manipulation of acoustic material.”

As a composer Feshareki has favoured collaborative enterprises, and will perform the work alongside London Contemporary Orchestra at Oliver Coates’ DEEP∞MINIMALISM festival in London this weekend. We spoke to her about Oram, the piece and her own career as a composer on the intersection of art, music and DJ-ing.

When did you first become acquainted with Daphne Oram’s work? Did it have an immediate impact on you?

I first learned about her work when I went to the Science Museum Oramics to Electronica exhibition. I can’t really describe how I felt when I discovered Daphne Oram, but it was weird how strongly emotional I got first learning about this composer who invented all these new ways of creating compositions using her own uniquely engineered electronic instruments. A radical composer who was working at the same time as Stockhausen but here in this country, yet I had never heard of her, and a woman who instantly became my role model.

A few weeks later I noticed I had a 10” record of her Electronic Sound Patterns in my collection, which to this day I don’t remember buying. Once I discovered Daphne Oram, I came across other key left-field composers who worked both with electronics and acoustics from the same era such as Eliane Radigue, Pauline Oliveros, Else Marie Pade and James Tenney and my life transformed into something new. 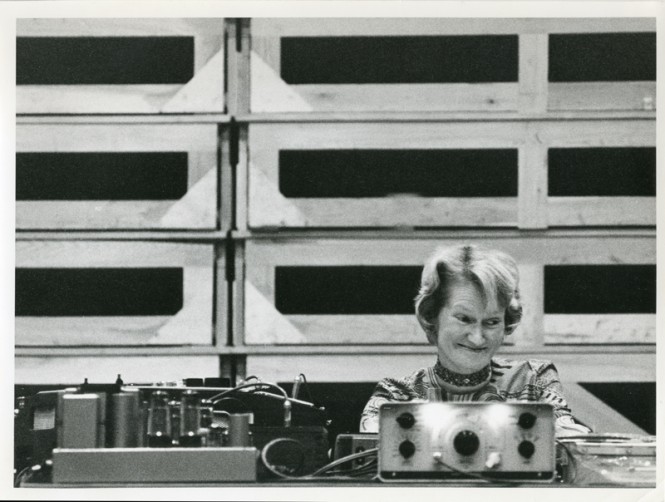 What was it about Still Point, as opposed to the rest of her work that interested you?

It all happened very organically. I went to visit James Bulley at the Goldsmiths Special Collections where the work of Oram is archived, simply to learn more about her work. James is the archivist at the collection and a composer I have been working closely with for over a year to prepare Still Point ready for its world premiere.

It was when I visited the Oram archive for the first time and James showed me a box of loose pieces of pencil draft manuscripts, that I came across Still Point. In this box was all of Oram’s early concert music which she wrote between the ages of 17-24, none of which has been performed.

James told me that Still Point was arguably the first ever piece of music to require the live electronic manipulation of acoustic material. I then noticed a small, hand written piece of paper written by Oram which stated “Still Point: For Double Orchestra, Microphones and Three pre-recorded 78 RPM discs (1949)” and I was stunned to realise this piece was for turntables and orchestra! It is likely that had it been performed in 1949, it would have transformed the development of electroacoustic music as we know it today.

At the moment, it is a stand-alone piece, that doesn’t fit into any known medium of the time. For me, it was particularly stunning, as my compositional practice is centred around concert music for turntables and orchestra, and I have always seen the turntable as a classical instrument. All of a sudden, the way I had developed my turntabling practice for the past decade, made sense to me. It all felt very surreal and destined. 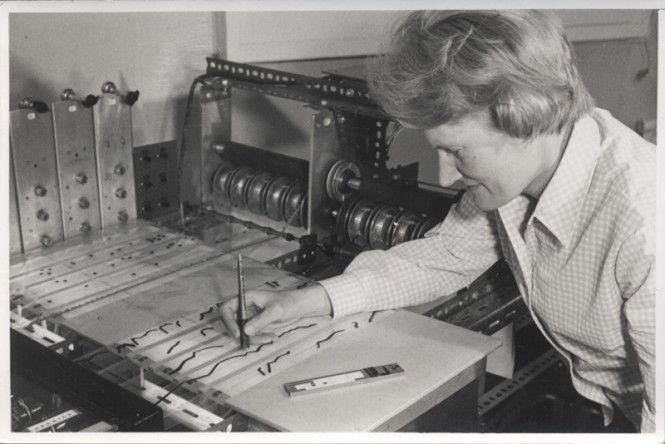 What form will this combination of electronic manipulation and acoustic instrumentation take?

In recording, the orchestral material is cut directly onto 78 RPM dubplates using a lathe that was from that era, never compromising that very physical analogue sound. The lathe cutting was executed by composer and researcher Aleksander Kolkowski and Sean Davies (who is a highly skilled and specialist engineer who worked at the same time as Oram). Sean can look at the grooves of a record and tell you what music is on there!

Once the 78 RPM discs are cut, the records get manipulated live on turntables, in duet with the live acoustic orchestra. As the records have either a “dry” or “wet” natural acoustic quality, I have an acoustic spectrum of wet<--->dry, so everything falls in there with the manipulation in terms of “effects”, which is such a brilliant concept by Oram.

And this completes Oram’s ‘Double Orchestra’ concept: One live orchestra, one live-manipulated orchestra via three turntables. I will be performing the turntable part (which I constructed using Oram’s notes). I have very much refined my practice to execute this piece, to make the turntables not just feel like an instrument, but to feel like a full orchestra. 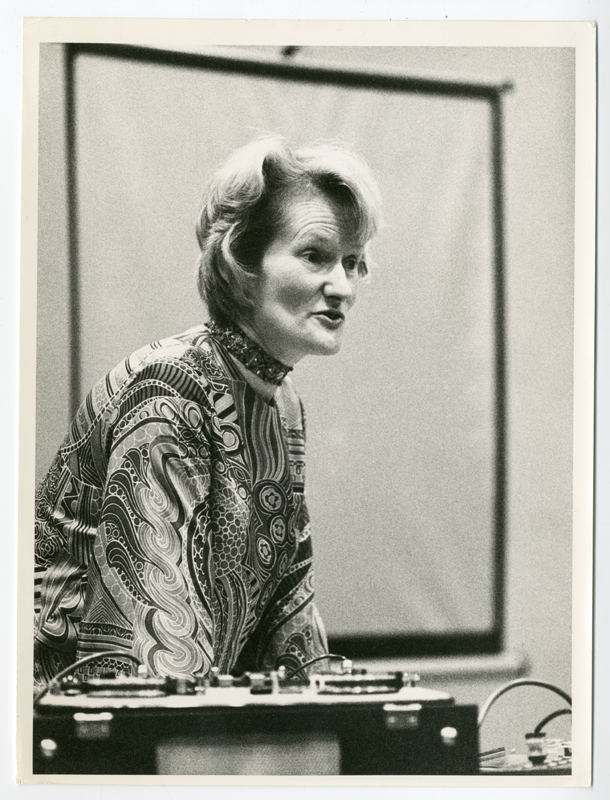 You talk about refining your practice specifically for this piece, but your work has always been linked with turntables. Where did that passion come from?

I have been working closely with turntables within an experimental classical context since I was a teenager. I love the physicality and movement of the records and how that affects how I manipulate sounds and how I relate to other instrumentalists. It is so intricate and expressive in comparison to other ways of achieving electronic manipulation.

I was working quite independently on this, as I chose not to acknowledge DJ-ing or dance music culture at first, until I had refined my practice the way I wanted to as an experimental classical composer.

It was only when I discovered Still Point, that my work made contextual sense. Since working on this piece, I have learned so much from Daphne Oram, especially thinking more about space, and looking at microphones and recording techniques as part of the composition, instrumentation and orchestration. Also, I have learned from her that in order to test-out something radical and unfamiliar, you need to have a component of familiarity within the music, in order to add context. 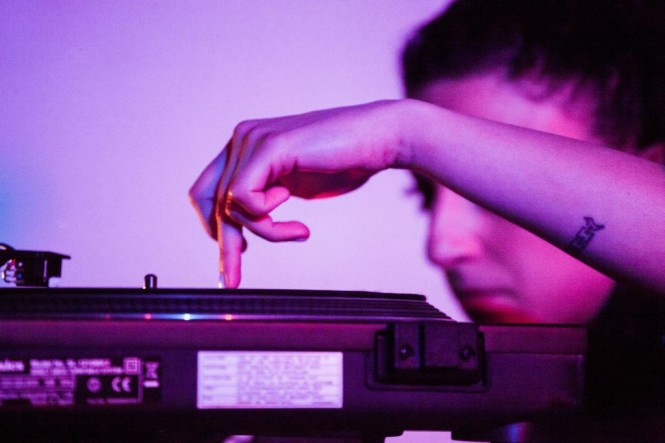 As a very tactile medium, what is it about working with physical objects and ‘analogue’ sound that interests you more than composing in the digital realm?

Physicality and movement are a key part of my compositional practice. The way you hear the pitch of a car motor ascend, as the car moves faster, or you pour a fizzy drink into a glass and you hear the sounds as the glass fills with gaseous liquid etc: These everyday physical experiences feed my music. I can’t see myself working with digital components at the moment. I am too obsessed with physical experience and the way sound travels, and relates to other stimuli such as light, space and touch.

I also love that “real” sound of electricity. For example, if I take the needle off my turntable cartridge and place my finger on the wires, that rumbling bass sounds can become a composition where the electricity is conducted through my body.

Or if I compose music for a church organ: you can feel the rumbling of the organ inside your body as it resonates within the architecture of the building. This is real to me, and the listener can relate this music to their every day perceptions. Therefore, it feels real to everyone. 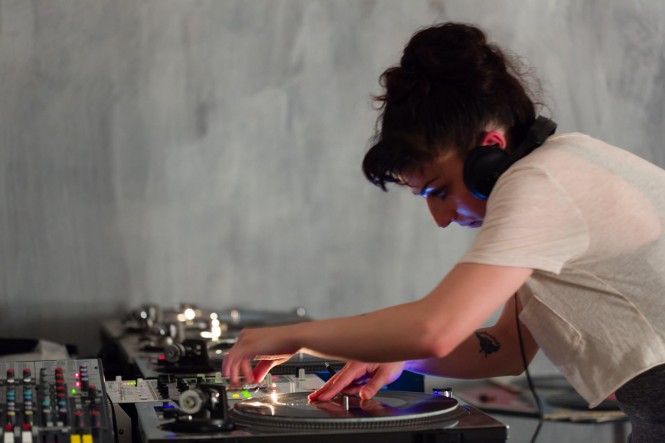 As well as classical music, the cross-over with DJ culture, sampling and electronic music in your work is becoming more pronounced. Do you have a record collection? Does this play a more active role in your work?

Yes, I have a record collection which spans from old classical recordings, to jazz, dnb, jungle and I have a particularly strong collection of records from the electroacoustic eras of the mid-late 20th Century such as James Tenney, Xenakis, Daphne Oram, Eliane Radigue, and Pierre Boulez (the latter being a composer I manipulate quite irreverently as I think the music is too serious and complex for my liking).

My turntabling practice can be described as a manipulation of pre-recorded sound to create new gestural movements and textures not always apparent in the record being manipulated. I often modify and prepare the turntables using sculptures that use the electricity, magnetism and circulation of the turntables to create sound and shapes.

Sampling is an important part of my compositional practice as it allows me to give a respectful nod to history. At the same time, the samples within one piece of my music can be ever-changing depending on performance context, performer or the time in which the piece is being performed: This means the same composition is always moving and evolving with time and people, and has a specific meaning to that moment in time or that occasion.

Shiva Feshareki will be performing the world premiere of Daphne Oram’s Still Point (1949) at St John’s Smith Square on Friday 24 June alongside the London Contemporary Orchestra as part of Southbank Centre’s DEEP∞MINIMALISM festival. Click here for more information and to buy tickets.

Martin Scorsese and Mick Jagger's Vinyl cancelled after one season 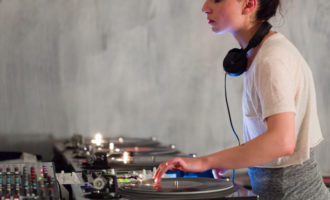 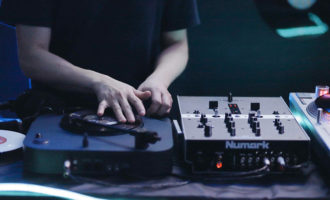 This new portable bluetooth turntable lets you scratch on the go