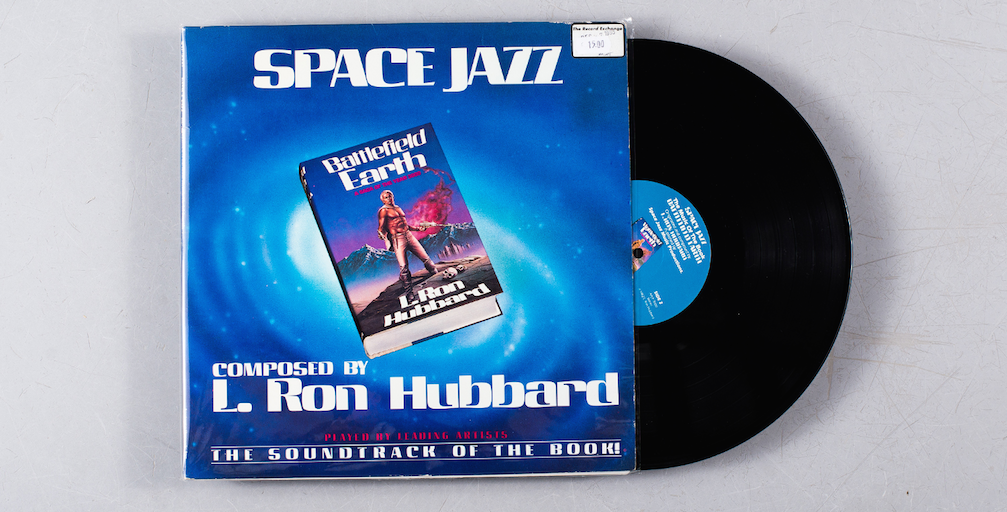 Though both Louis Theroux’s new My Scientology Movie and last year’s groundbreaking documentary Going Clear focus on disturbing allegations of abuse within the ‘church’, we now also know that the ‘religion’ is rooted in science fiction.

After dropping out of college in 1932, Scientology’s future founder, Lafayette Ronald Hubbard, started a career in pulp fiction, earning as little as a penny a word. He wrote over a thousand titles; in fact, according to Going Clear, Hubbard holds the Guinness World Record for the number of works published, most translated author, most audio books published by an author, and most translated author of the same book (The Way to Happiness).

He wrote on a variety of genres – mystery, western, romance – but most prolifically, science fiction. Many of the escapist, fantastic themes and concepts from his stories re-appear in Scientology’s creation story, developed as Hubbard made the transition to religious figurehead in the thick of ‘50s Space Race culture. His Scientology texts involve “space operas” – lengthy narratives about thetans (human souls) and the universe; the best known of these – largely thanks to South Park – is the myth of intergalactic tyrant Xenu, who, 75 million years ago, sent billions of his slaves to Earth, stacked them in volcanoes and then blew them up with hydrogen. Unlike most religious organisations, Scientology maintains strict control over its religious works, which are stagger released to members only when they unlock new spiritual levels via successful psychotherapy and payment. 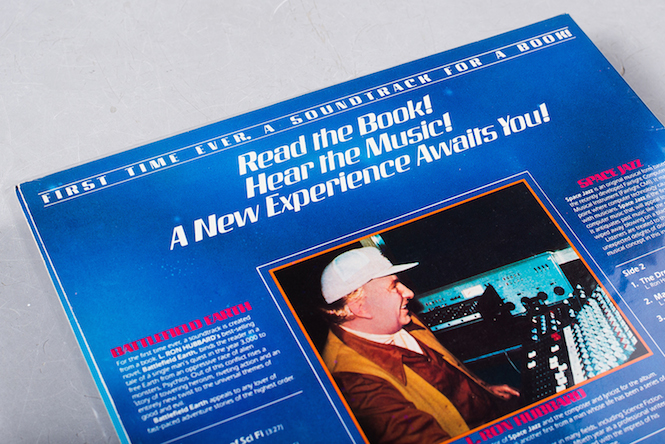 Scientology’s accession – including its landmark 1969 court victory against the FDA for religious status – put Hubbard’s days as a struggling pulp fiction author behind him. “Writing for a penny a word is ridiculous,” he reportedly once said. “If a man really wants to make a million dollars, the best way would be to start his own religion.”

But by the early ’80s, sci-fi was in vogue again and Hubbard wanted back in. The same year E.T. hit screens, Hubbard published the novel Battlefield Earth, which depicts an Earth ruled by alien race Psychlos and tells the story of the human rebellion that develops. For his first openly sci-fi text in four decades, Hubbard composed an accompanying concept album, Space Jazz, which was marketed as the first-ever soundtrack to a book.

Jazz great Chick Corea, a known Scientiologist, stars on the album alongside his Return to Forever bandmate Stanley Clarke, then also a member, and the late English pianist Nicky Hopkins. With Hubbard the lyricist, Space Jazz falls into a unique category of works written and performed by Scientologists; another being the John Travolta-starring movie adaptation in 2000, which regularly ranks amongst the worst films made that year, decade, or whatever other unit of time those evil Psychlos work in.

Space Jazz is just a touch superior to its cinema counterpart. You only have to hear the ghastly jumble of neighs and gallops on ‘Windsplitter’ to appreciate that if this isn’t one of jazz’s worst, it’s certainly its craziest – which adds up because Hubbard had really lost the plot by this point. With looming legal threats, court fines, prison sentences and also rumours, in Scientology speak, that he had “dropped the body”, Hubbard was apparently at work from deep hiding. Following Battlefield Earth, he published ten-volume series Mission Earth between 1985 and 1987. As writer Jeff Walker has said, they were “treated derisively by most critics but greatly admired by followers”.

Although the same can be said of Space Jazz, which isn’t exactly Bitches Brew, it’s hard to deny the album’s status as an utterly unique work. What else opens with a tribute to the ‘Golden Age of Sci-Fi’; bewilderingly and bombastically referencing, amongst other things, Flash Gordon, Superman and Buck Rogers? We’re in even better company when we meet the Psychlos, characters shaded so subtly that their marching theme is a seemingly endless loop of Psychlo, Psychlo, Psychlo – Kill, Kill, Kill! The (mostly incomprehensible) plot (especially, if like me, you haven’t read the 1000+ page book) thickens when we meet main characters like ‘Terl, The Security Director’, our hero ‘Jonnie’ and his horse ‘Windsplitter’ (see above). Against a backdrop of childish robotic voices, am-dram-worthy dialogue, silly cues and overboard SFX, eventually ‘Mankind Unites’ against the Psychlos, there is a ‘Declaration Of Peace’, and ‘Earth, My Beautiful Home’ is restored. Hooray!

Naturally Hubbard was sure he was breaking ground with his “return” to sci-fi. He seemed to think that Space Jazz’s use of the Fairlight CMI – a then-new and pricey sampler-synthesiser workstation – had somehow unleashed the sound of the future. Scientology literature even claims Hubbard discovered untapped potential in the instrument that its inventors hadn’t anticipated. In reality, his sonic space opera would have sounded outdated before it was released. That’s not to undermine the Fairlight; a machine that Coil considered unsurpassed, describing it as the “aural equivalent of William Burroughs cut-ups”; and a key player on Kate Bush’s Hounds of Love. Still, maybe Phil Collins had Space Jazz in mind when, on the sleeve notes of 1985’s No Jacket Required, he insisted: “there is no Fairlight on this record.”

When Hubbard died in 1986, he left detailed instructions and audio tapes for a follow-up album, inspired by his aforementioned Mission Earth opus. Another conceptual work, this space opera was adapted by Edgar Winter, who has, perhaps ambitiously, described it as “both a return to rock’s primal roots and yet highly experimental.” That year, the Church of Scientology and its recording studio Golden Era Productions, released The Road to Freedom, a third Hubbard album with contributions from John Travolta, Chick Corea (again!), Leif Garrett, Frank Stallone and Karen Black. Whilst the Church called it a musical masterpiece, it was lambasted by everyone else. The Guardian’s Jonathan Leggett noted that at one stage Travolta croons, Reality is me, reality is you. Yeah, yeah, yeah…, and went on to call it “the kind of jazz noodle that they used to demonstrate CD players in Dixons in the 1980s.”

Amazingly, Hubbard has 21st Century music credits via The Golden Era Musicians And Friends Play Hubbard who released The Joy Of Creating in 2001. A quick scan of the tracklist should induce that sinking feeling you get when you remember someone you respect is a Scientologist. This time it’s pioneering beat-boxer Doug E. Fresh and Stax Records legend Isaac Hayes, who famously quit his role as Chef on South Park when the show satirised Scientology. Meanwhile, old pals Chick Corea and Edgar Winter step up once again to spread the Church’s message.

With Scientology facing fresh crisis in 2016 thanks to a wave of exposes, you’ve got to wonder if it’s finally time for another musical masterpiece?