From the tin shed to The Loft: How Klipsch became the world’s most iconic speaker brand 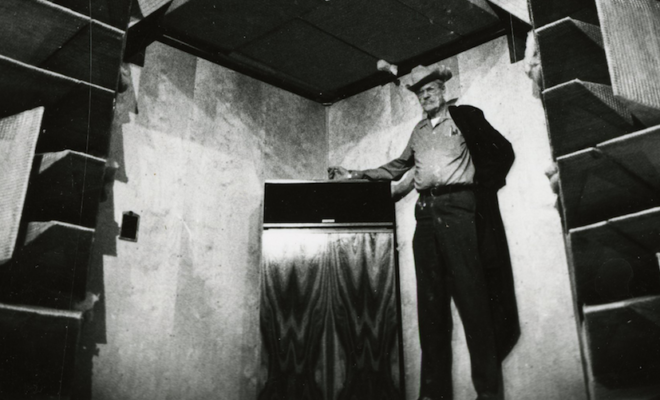 Whether as a premium home audio speaker or on David Mancuso’s Loft dance floor, Klipschorn’s are about as a cult a speaker as you’re likely to find.

Paul Klipsch may not have been one to keep his opinions to himself, but in the history of recorded sound he remains the quiet man of audio. The link between the earliest audio pioneers like Thomas Edison and the wall of sound now experienced at major music festivals across the world, he was one of America’s last lone innovators, a man who hand-made his first speakers in a tin shed on a former airbase in rural Arkansas to a design that has barely changed in 70 years.

Dedicated to bringing the live music experience into people’s living rooms, Klipsch was among the first audio pioneers to apply scientific testing to the process of speaker building, proclaiming boldly that his “findings about this technology will be proven wrong when the laws of physics are proven wrong”. He famously wore a “bullshit button” under his lapel, that he would flip over whenever he smelled a red herring (something all too common in the audio industry). Legend has it he was once thrown out of church for flipping the button to the minister.

But for all the myths and anecdotes, Klipsch’s legacy remains singular. A staple in the homes of audiophiles around the world, installed at public listening spaces like Brilliant Corners and Classic Album Sundays, and most famously at David Mancuso’s legendary Loft parties, the Klipschorn celebrates seven decades at the forefront of transmitted sound this year. To mark the occasion we spoke to Matt Sommers at Klipsch the hear first-hand history of the horn. 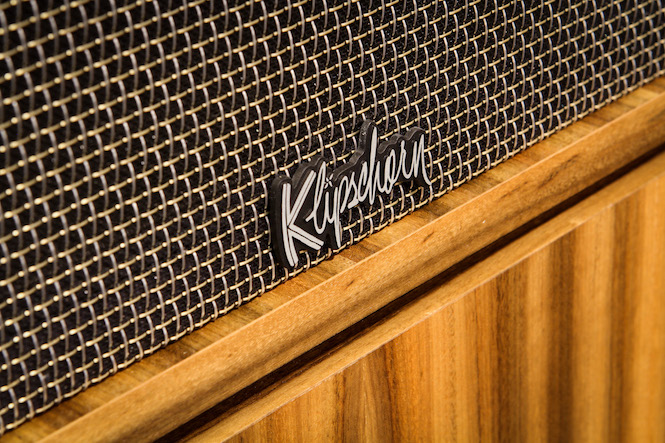 Paul’s personal history is very important to the brand. Could you give us a potted history of who he was and what motivated him to get involved in the speaker business?

Everything that we make goes back to his fundamental discoveries in the field of audio. Basically the story is that in 1946 Paul invented a loudspeaker that changed the face of audio, or the voice of audio, for the rest of the world. His discoveries from back then were based solely on scientific research and development. Paul is that catalyst that got us from the cylinder and the gramophone all the way to modern sound reproduction.

That goal for him was originally to bring live music into his living room. That was where it started. He really wanted to bring that power, that detail and emotion of that live musical performance into his living room. And even went so far, back then, once he had designed his speaker, he did his own field recordings to demonstrate the power of the speaker. They’re some of the most detailed, wonderful recordings ever made. We have over 400 reels of his early recordings here. Jazz bands, blues bands, church organs, all sorts of performances… ping pong matches.

Where did this interest in sound come from?

His passion for sound came from his career in acoustics. And before that there were three other careers that led to that. He was in the military, where he measured sonic waves and vibrations of ballistics. He did oil prospecting for one of the largest oil prospectors in the country. But whether it was geothermal stuff, or ballistics and munitions, it was all about recording and measuring what could be done. So the acoustics were a natural progression from that.

So he was second in command of one of the largest contingencies of armed forces in Hope, Arkansas at the munitions proving factory there where the Klipsch factory is now. After World War Two, the US government said that they needed to own less stuff, so they released a lot of soldiers from deployment and Paul Klipsch bought part of the proving grounds for ten cents on the dollar and started building loudspeakers out of the very place he had worked in the war.

What did the audio landscape look like at this time?

There were corner horn speakers at the time, they were more efficient than other speakers but they had a horrible frequency response, so that’s what led Paul to do things like build his own crossovers by hand, to wind his own voice coils, to really create a system of measurement that would tell him what the speaker was doing as opposed to just relying on the human ear to try and figure out what was happening.

So in that landscape back then, people were creating all sorts of ways to project sound, but what was interesting was, back then, in order to really achieve bass response you had to have a thirty-foot theatre horn, so none of this stuff was compact and none of this stuff would fit in your house. This is what Paul wanted to do when he designed his first Klipschorn – which was considered a compact speaker for the day. That folded horn design for the low frequency that allowed it to reach down into the low frequency ranges was considered revolutionary. And by putting it in the corner and basically making the room part of the speaker that was also considered revolutionary. It was his life’s work trying to achieve that goal.

How much changed in the design of the speaker since the early days? Probably not, I imagine?

Exactly. There have been maybe a hundred small changes of the years, but most of which are cosmetic. It has remained basically unchanged.

What does it actually mean to make a speaker by hand?

So the horn was moulded fibre glass, which he would build the mould for. He would heat the fibre glass and pour it in to create the horn. He would buy pre-made premium drivers and through a litany of testing would find the right one. He would hand-cut the wood – there were over 350 screws in the original Klipschorn, and then he would hand-wire the crossovers that would be placed inside the high-frequency cabinet and then he would hand-solder all the points. It was about as hand-made as you could be at that point, without having a massive machine shop.

Inside the Klipsch factory in the ’70s

Are elements of this hand-making retained today?

It’s interesting because when you watch Klipschorns being made they have perfected some of the manufacturing parts of it, but it is still hand-built. So pieces of wood and cut and stacked like a puzzle and then someone comes over and puts together all of the pieces in the pattern, and it takes about a day to build, so it take a long time to build up one of these. And once that’s completed the drivers and horns are dropped in and the grill cloths are put on, then screws are used to secure the speaker infrastructure – all installed and tightened by hand. 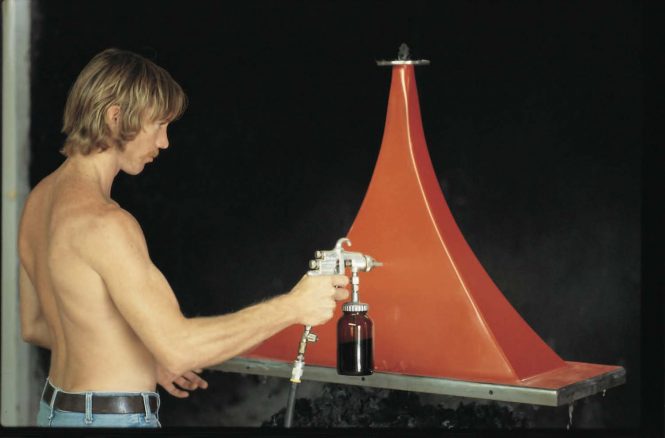 Having started as a speaker to bring performance into the home, the Klipschorns are also famous for having powered David Mancuso’s Loft parties in a club environment. How was that transition made?

What happened was, there was a big push in the late ’70s and early ’80s for this industrial sound, and what David realised early on – from everything that I’ve heard – was that this sort of industrial sound was not providing an experience. You could get the impact of that live music experience, undistorted, with minimal amplification.

A klipschorn will do 106 decibels with one watt, so it’s incredibly efficient and sensitivity on there is just through the roof. So for David is was an efficiency story, it was an experiential story where, instead of being blasted by sound from one side of the room, you’ve got this surround experience with the music all around you, and you’re working the speakers so efficiently that it’s not that strained. It actually provides a really great dance experience for a really long time without ear strain but at a very high volume. And you can get thirty-forty feet back from them and still get incredible energy. It’s almost completely immersive. 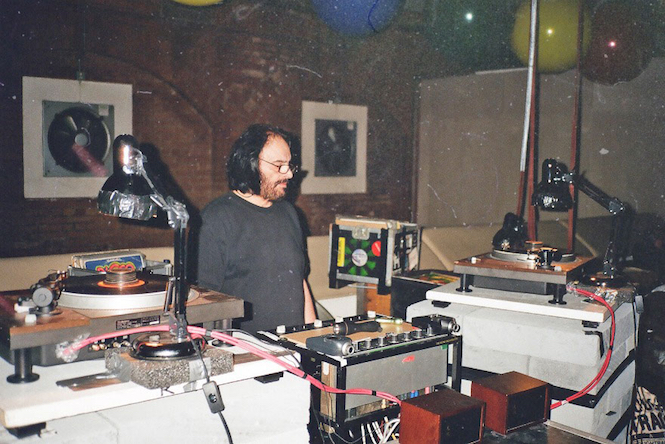 And that probably suited the music that was being played there?

Exactly, it also gave a real natural quality to the sound. And the Mancuso parties were unique because what he did was take it to a whole other level and created that envelopment experience where you could really get lost and I think that’s what people love about that, because you can just let your troubles go and enjoy it.

In that sense, the Klipsch legacy goes way beyond home audio.

Paul Klipsch is one of the last unsung heroes of audio. We’ve all heard the story of the Thomas Edisons of the world, but there is a direct lineage too which is very interesting. Thomas Edison was still at GE when Paul Klipsch started working there, so they had a little bit of a crossover at the dawn of audio, the very beginning.

And then later on in Paul Klipsch’s life, he heard a radio interview with a man named Bob Heil who runs Heil audio, and Paul called up Bob and said “Is there a field in the back of your house? I’d like to land my plane there and see what you’re doing with 10,000 watts of power.” 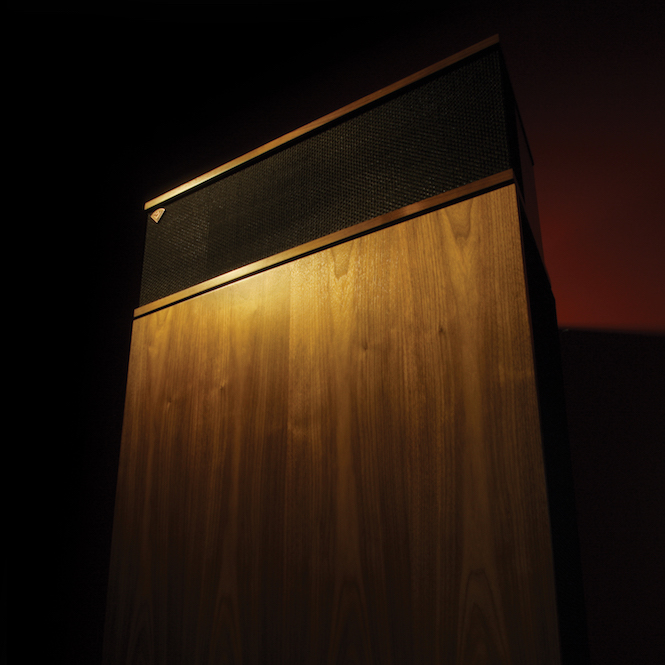 Bob went on to create the Grateful Dead’s wall of sound and The Who’s Quadrophenia and modern day live rock concert sound as we know it. So there’s a direct lineage all the way from Thomas Edison to Bob Heil and in the middle part there is Paul Klipsch. Paul took us from cylinders to Quadrophenia.

Although Klipsch retains that reputation as a premium speaker, the wider influence of Paul’s work does seem less recognised.

There’s a nice analogy that can be made with The Velvet Underground who only sold 20,000 copies of their first album, but influenced every single person who listened to it. It’s one of those things. So I consider Paul in that vein because he did what he wanted to do, because he didn’t really care if people bought the speakers or not. All he followed was the pure idea of trying to create a better sound.

All photos (except David Mancuso) courtesy of Klipsch. 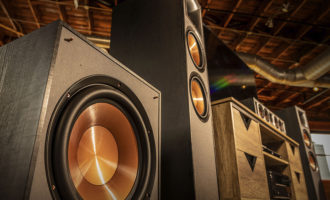 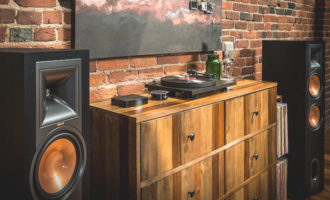 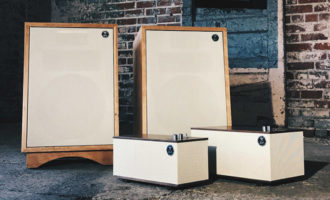