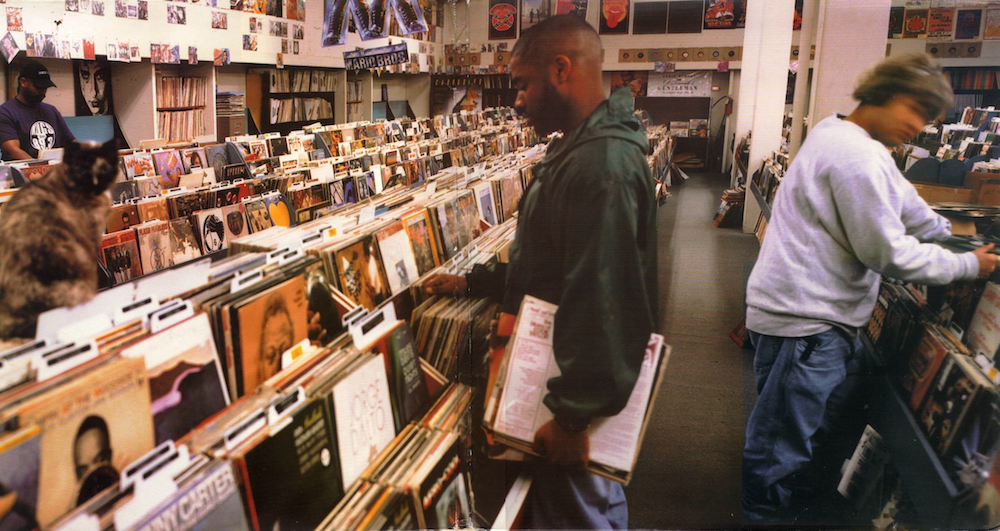 Composed almost entirely of sampled content lifted from vinyl records, DJ Shadow’s Endtroducing is something of a crate digger’s bible. Eliot Wilder reflects on the landmark hip-hop album, nearly two decades on from its original release.

When it was released in 1996, Endtroducing sounded like nothing that had come before – an album of beats, beauty and chaos. Looking back, no other popular record better summarises the end of the 20th century. Josh Davis, alias DJ Shadow, took elements of hip-hop, funk, rock, ambient, psychedelia as well as found sounds, oddball spoken-word clips and cut-out-bin nuggets – a trove of mostly forgotten or obscure recorded sounds – and then wrote the ultimate lesson.

All this from a suburban kid who grew up in Davis, California – a small, out of the way aggie college town. But Josh was a suburban kid with a passion – an obsession, really – for vinyl. Davis has spent a good chunk of his life scavenging through what most dismiss as ephemera: the records that reside in those musty used record stores. To many, they are less than meaningless. But to Josh Davis, they are lost souls. And, as their rescuer, he has done them an honour. Because these lost souls have a home on Endtroducing.

It is an album that sits with you and lingers. It’s an album you can return to and discover whole new areas you hadn’t been aware of, like finding a room in your house you never knew was there. Or like the time you spied your dusty copy of The Catcher in Rye on the shelf and, after reading it for the first time in years, thinking, I didn’t know it was about that. But what draws you to Endtroducing time and again is that Endtroducing never fails to deliver emotionally on so many levels. Despite its melancholic atmosphere, there is something uplifting at its core. “If I were to find one word that resonates more than anything within Endtroducing, it would be ‘hope,”‘ Josh has said.

Since Endtroducing, DJ Shadow has produced other remarkable records; his second album – 2002’s The Private Press – expands upon everything that was unique about Endtroducing, and his other major releases – The Outsider (2006) and The Less You Know, the Better (2011) – demonstrate that he is not willing to or interested in repeating himself.

Postmodernism is tough to define because it gets attached to so many aspects of our culture. In art, it is a broad expression for those movements that followed modernism, which, in the early 20th century, was a rejection of antiquated Victorian values and traditions. Many of the first postmodern proponents were the post-structuralists of the ’70s, French philosophers such as Jacques Derrida, Jean Baudrillard, and Jean-Francois Lyotard, all of whom espoused themes of uncertainty and dislocation that mirrored what they felt was the disintegration of society’s moral, political and economic bases.

Modernists like T.S. Eliot, James Joyce and Virginia Woolf believed that art could provide coherence and meaning in meaninglessness. But postmodernism, says professor Mary Klages of the University of Colorado, doesn’t lament the idea of fragmentation or incoherence, but rather celebrates it. Klages says that according to Baudrillard, in postmodern society there are no originals, only copies. You might think about painting or sculpture, for example, where there is an original work (by Van Gogh, for instance), and there might also be thousands of copies or reprints, but the original is the one with the highest value. Contrast that with music recordings, where, usually, there is no “original,” as in painting – no recording that is hung on a wall, or kept in a vault; rather, Klages says, there are only copies, by the thousands, that are all the same, and all sold for a similar amount of money, albeit contingent on the pressing. Popular music has always relied on a certain amount of cannibalism.

In the liner notes to Capitol’s reissue of Surfin’ U.S.A., Brian Wilson says of the title track: “I started humming [Chuck Berry’s] ‘Sweet Little Sixteen.’ And I got fascinated with the fact of doing it. And I thought to myself, ‘God, what about trying to put surf lyrics to the ‘Sweet Little Sixteen’ melody.’ The concept was about ‘they’re doing this in the city, they’re doing that in the city,’ the Chubby Checker [‘Twistin’ U.S.A.’] concept. So I thought of calling it ‘Surfin’ U.S.A. ‘ ”

Read a review of any new record and you can’t miss how much trainspotting is employed. Comparisons are inevitable because rock ‘n’ roll is nothing if not the sum of its parts. It’s in the grand tradition of pop to borrow – to sample your  favourite riff and incorporate it into your own style. Elvis Presley sampled from the styles of R&B pioneers like Roy Brown; the Beatles sampled the harmonies of the Everly Brothers, and Eric Clapton sampled Robert Johnson’s hell-bound blues. Jimmy Page gets hold of Howlin’ Wolf’s ‘Killing Floor’, and – poof – ‘The Lemon Song’. MC Hammer plunders Rick James’ ‘Superfreak’ and out pops ‘U Can’t Touch This’. The Beasties lift the riff from AC/DC’s ‘Back in Black’ and spit out ‘Rock Hard’.

Pilfering is the warp and woof of pop music. And no popular music genre is better at it and more artful with it than hip-hop. Doug Pray’s documentary Scratch details the history of the form, whose pioneer, Grand Wizard Theodore, explains the difference between hip-hop and rap: the former is a  culture, the latter is an component of that culture. And what is that culture? It’s one based on the breakbeat, what Afrika Bambaataa – founder of the Universal Zulu Nation in the South Bronx and often credited with having the greatest  influence in shaping the culture of hip-hop – says, “is that part that you look for in a record that lets your God-self just get wild.”

Scratch details the DJs’ lives, their passions, their struggle to develop a form from the only “instruments” they  had available to them: their parents’ turntables and record collections. As Asphodel Records co-founder Naut Humon observes, the listener could now participate in the music he was listening to. The documentary shows hip-hop and  its attendant elements – MC-ing, deejaying, graffiti art and breaking – as a way of life. It’s all about freestyling, about improvisation, about skilfully mixing beats in your own unique way. Like when Mix Master Mike (who handled the decks for the Beastie Boys) scratches an old Robert Johnson blues record, and the past becomes the present.

Among the hip-hop heavyweights featured in Scratch are Kool Herc, Qbert and the Beat Junkies, Cut Chemist, Jazzy Jay, Z-Trip, and Dot a Rock and Kevie Key, and Grand Mixer DXT – best known for his ground-breaking deejaying performance on Herbie Hancock’s ‘Rockit’. There is talk of extraterrestrials and intergalactic travel. There is also a healthy yet fervent rivalry between most of them; competitions such as Disco Mix Club, or DMC, portray turntablism as blood sport. Says DJ Craze: “Battling … is where hip-hop came from – from being competitive, from knocking the next guy down.”

But there is one DJ in Scratch who seems less concerned with knocking the next guy down and a lot more interested in the actual music itself, its origins, and its essence. He is, as Cut Chemist calls him, “The king of digging.”

In the catacombs beneath the much-beloved Records store in Sacramento is DJ Shadow, sitting Buddha-like in between rows of old vinyl records that reach to the ceiling. It’s like the scene in John Cusack’s apartment in the movie High Fidelity, only after a devastating earthquake. Shadow’s tone is deferential: “This is my little nirvana. Being a DJ, I take the art of [crate] digging seriously, and this is a place I’ve been going for 11 years. It’s an incredible archive of music culture, and there’s the promise in these stacks of finding something that you’re going to use. In fact, most of  [Endtroducing] was built off of records pulled from here. So, it has almost a karmic element of, ‘I was meant to find this on top,’ or, ‘I was meant to pull this out because it works so well with this.’ So it has a lot of meaning for me personally. Just being in here is a humbling experience because you’re looking through all these records and it’s sort of like a big pile of broken dreams, in a way.”

It is that reverence and respect – coupled with a keen understanding of how ostensibly incongruent pieces can somehow fit together to form an organic work – that Endtroducing is built upon. Because if anything, Endtroducing is a lucid fantasia, culling decades worth of discarded beats, disembodied radio signals and  unclaimed melodies. It is a record that not just makes everything old new again; it also opens wide a fresh yet curiously recognizable dimension. It is a mosaic of grooves, dissonant shadings and found objects that, as critic Robert  Christgau says, “accrues a mysterious fascination without ever revealing their relevance to each other or anything else.” DJ Shadow and Xcel in the basement of the now defunct ‘Records’, where the Endtroducing cover was shot

What resonated about Endtroducing when it was released nearly 20 years ago, and what makes it still resonate today, is the way in which it loosens itself from the mooring of the known and sails off into an uncharted territory that seems to  exist both in and out of time. Davis is not only a master sampler and turntablist, he is also a serious archaeologist with a world-thirsty passion (what Cut Chemist refers to as Josh’s “spidey sense”) for seeking out, uncovering and then ripping apart the discarded graces of some other generation – that “pile of broken dreams” – and weaving them back together into a tapestry of bleakness and beauty. Piano notes drop like rain. Drums crackle with a terrible momentum. A burst of guitar grates nastily. An unrelenting tension thrums throughout. It wrangles your emotions. It is soundtrack music to a psychological horror film that even David Lynch might have a hard time dreaming up. It is the score to that nightmare you can’t put your finger on.

Endtroducing, according to Shadow, “is like every record that I make, in that there’s a sense of you starting on a journey. You experience things and you come back to the end, full circle – hopefully, having learned something, or  having gained some sort of something out of the experience.”

5 things to see at Station To Station - Week 5 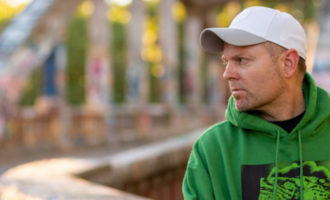 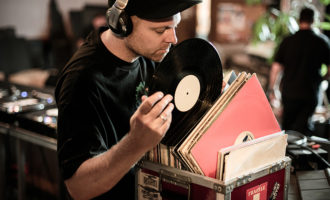 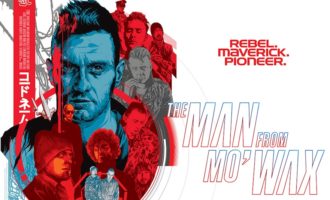 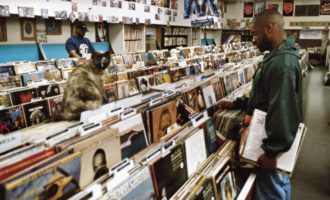