Home Grown: “There’s this great sense of friendship and community with vinyl” 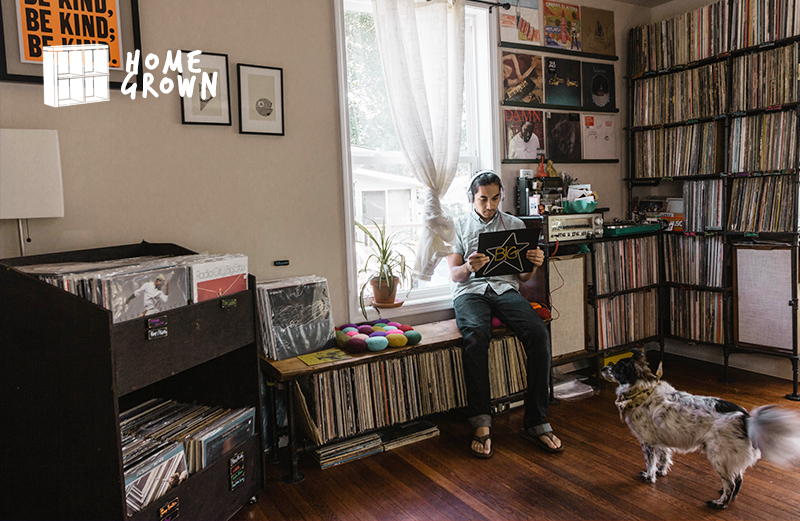 Because every record collection has a story.

Home Grown is our series profiling you lot and your excellent record collections. Taking our cue from the brilliant submissions to the #VFRecordCollections thread on Instagram, we want to share a little of your hard-earned love for vinyl with the world.

Each week, we’ll be profiling a different collector from around the world and finding out what makes them tick. Want in? Send us a pic and a few words about your collection to [email protected]

How long have you been collecting for?

About eight years. I started in my last year of college, and have been going strong since.

What part of your set-up are you most proud of?

My favourite part is how my collection is housed. I got really into DIY builds, so I custom made everything that my records are stored in. The only problem with this is that it took a while to get the materials and concept for what I wanted to build. By the time I completed it, I needed more storage. Definitely a catch-22 with the whole process.

What record(s) are you most proud of?

Blonde was hands down my favorite record of 2016. A fellow Instagrammer tipped me off that Frank Ocean was selling a limited pressing through his online store, and I immediately jumped on it. I am so grateful to have a network of really cool people, who are more about community than hoarding things to flip or keep limited.

I have both versions of Mondo’s Over the Garden Wall release, and I love them both. After I watched the television series for the first time and fell in love with it, I searched online for the band who created all the amazing music. That led me to the Blasting Company. So I reached out on their website to say how much I enjoyed the soundtrack, and asked if they still had copies of their vinyl for purchase. Luckily, they had a few left in a storage closet and I snagged one! It’s not rare or valuable by any means, but it was an awesome experience connecting with artists who might not have been fully appreciated.

Working in film and being a film nerd in general, I collect a few soundtracks, and was able to snag a Beasts of the Southern Wild soundtrack before they all disappeared. That movie blew me away when I saw it at the LA Film Festival, and the score is still one of my favourites to date.

What does your record collection mean to you?

I think it started out as a curiosity, that became a hobby, that became something more. For starters, I love everything tangible about a record. It goes beyond the sound quality for me. It’s the fact that you also have the art – both in the sleeve and limited prints in certain pressings – and the liner notes, and you can dive deeper into the music.

Second, vinyl has become a much greater community to me, especially through Instagram. I have pen pals in different countries, and people I consider my friends all over the States now.

Even offline, hanging with people in line for record store day or waiting for a signing, there’s this great sense of friendship and community. And for friends who don’t collect, my collection sometimes inspires them to start.

I love getting people a record player or a record as a gift. Also, it’s great to play vinyl on my radio show Alpenglow here in Asheville. It’s so much more satisfying than cueing up something on the computer.

Finally, I love that bliss you get on a lazy Sunday afternoon after you’ve built a stack of records that you just chill with and play.