The story of highlife and Afrobeat legend Ebo Taylor

Ebo Taylor’s new album, Yen Ara, marks the Ghanaian highlife and Afrobeat legend’s 60th anniversary as a professional musician. He talks to Chris May about hanging out with Fela Kuti and the Beatles in “swinging London”, the importance of jazz in shaping his style and the changing fortunes of West African highlife.

Confusion surrounds the exact chronology of Ebo Taylor’s lengthy career, and over the years he too has been flexible with dates and events. A lot of water has, after all, passed under the bridge. There are some certainties, however. Taylor was born in 1936 on Ghana’s Cape Coast, where he still lives, in Saltpond City. Around 90 road-miles west of Accra, Cape Coast is home to a string of fishing villages where traditional Ghanaian music continues to be part of daily life and where Taylor grew up listening to the roots highlife that has always been at the heart of his style.

Tayor came of age during the golden years of highlife, an era dominated by the pioneering saxophonist and trumpeter ET Mensah and his band The Tempos. After leaving college, Taylor joined the Stargazers, a highlife band led by saxophonist Teddy Osei and drummer Sol Amarfio, who were among the founding members of the hugely successful British-based Afro-rock band, Osibisa. When Osei and Amarfio broke up the Stargazers to form the Comets, Taylor played with, and arranged for, a succession of highlife bands on the Cape Coast and in Accra.

From 1962 to 1965, Taylor lived in London, where he studied at the Eric Gilder School Of Music. In 1965 he returned to Ghana, where he set up the New Broadway Dance Band, leaving them in 1970 to form the Blue Monks. Both bands, at various times, included the singer Pat Thomas, another alumnus of the Stargazers, who was soon to find fame across West Africa with his own band, the Sweet Beans. Taylor and Thomas have since frequently recorded together. In the early 1970s, Taylor also became the in-house guitarist, arranger and producer for Dick Essilfie-Bondziea’s prolific and influential Essiebons label. 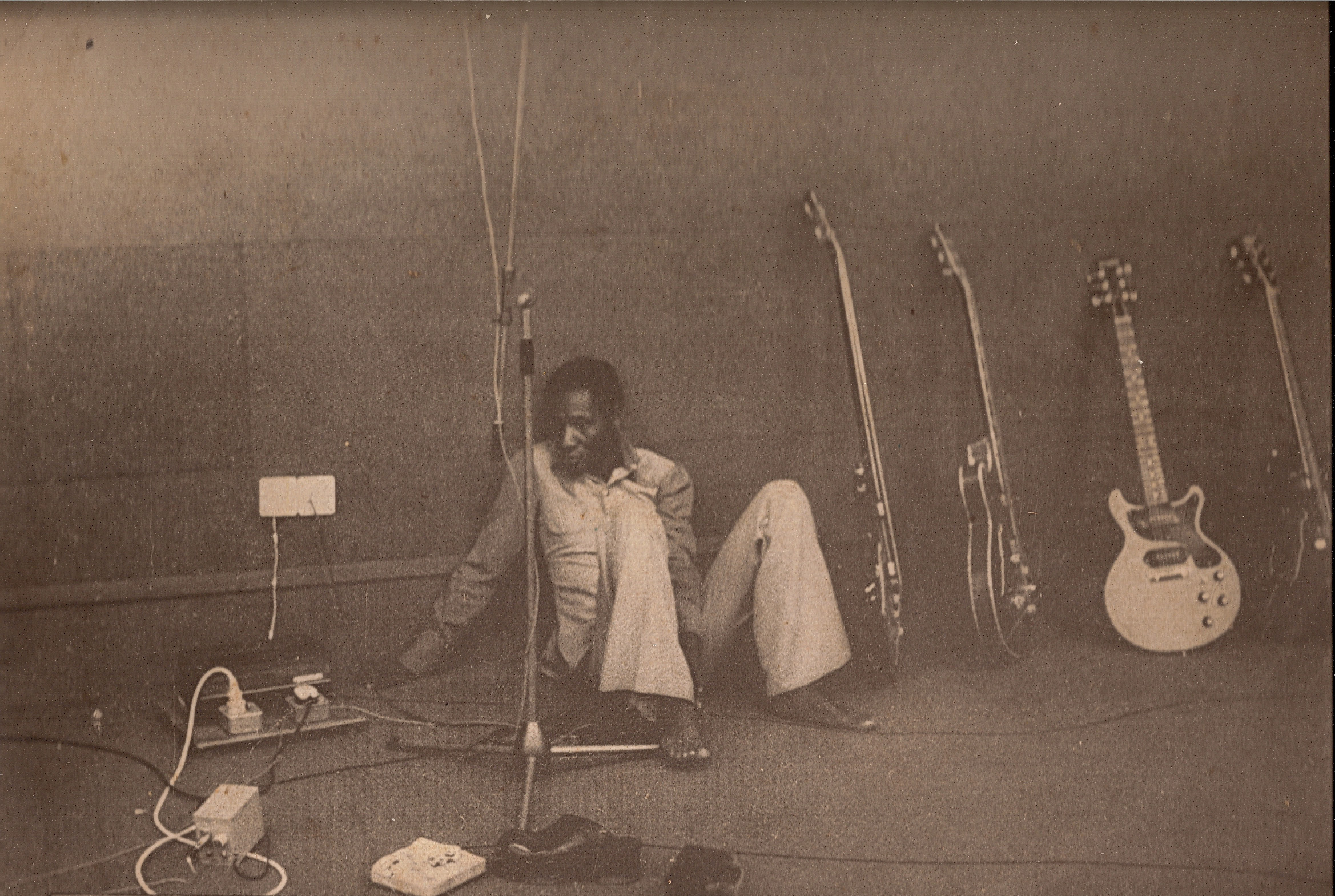 Among Taylor’s uncommon attributes is his affinity for both highlife and Afrobeat, which have traditionally existed in near-parallel universes. It is likely that Taylor developed this talent while working at Essiebons, which recorded a wide variety of West African musics, from Ghana, Nigeria, Ivory Coast, Guinea and elsewhere. His cultural inclusiveness began, however, in London in the mid 1960s….

The Eric Gilder School of Music was then located in Soho’s Wardour Street, bang in the middle of London club land (the Marquee club moved into the building immediately next door to the school in 1964). Like the Nigerian saxophonist Peter King and (then) trumpeter Fela Kuti, who were also studying music in London and both of whom he soon got to know, Taylor learnt more about music by listening to, and sitting-in, with club bands in Soho and Notting Hill – then countercultural and socially marginalised areas on different planets than they inhabit today – than he did by attending college lectures. “There was one particular Soho club called the Abalabi which featured highlife,” says Taylor. “Fela and I used to go there and jam a lot.” Both musicians also absorbed a lot of live jazz.

“It was fun to be in London,” says Taylor. “It was the swinging ’60s and I hung out in clubs with musicians like the Beatles and the Rolling Stones. They were good times. But highlife music wasn’t popular with English people then. They enjoyed calypso and ska but not African music. I think they thought that, unlike Trinidad and Jamaica, Africa was primitive, with people living in trees in the jungle. They didn’t come across African music in their social life and they weren’t interested to seek it out, so they never really heard it. But highlife was very popular with Africans in London! It was a powerful reminder of home.” 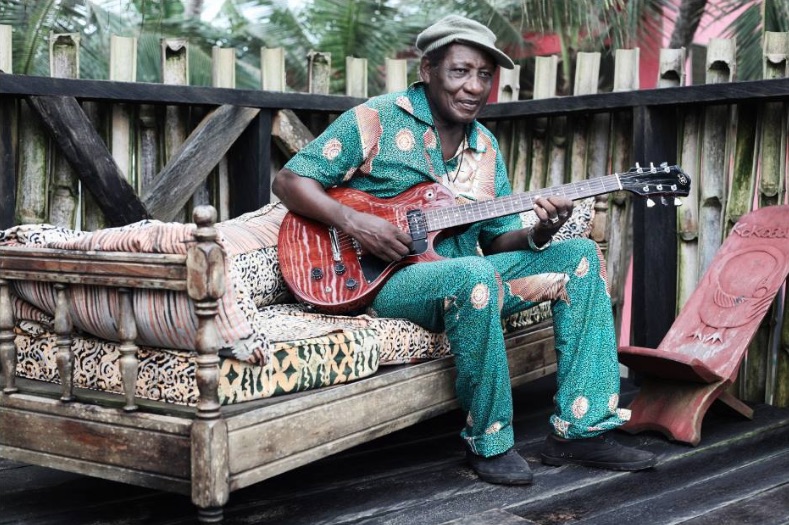 Living in London in the 1960s, did Taylor ever dream that African music would break out of its niche and gain a wider audience? “I had hopes that it would catch on with English people, but I never really thought it would happen,” says Taylor. “Twenty years later world music changed all that though. English people started having more interest in records from Africa. Today there may be more Afrobeat bands in Europe than there are in West Africa. It is remarkable.” (Today’s crop of mixed-ethnicity Afrobeat bands was actually preceded by similarly inclusive highlife bands in London in the mid 1980s, when the world-music movement was emerging. Among the most prominent was Hi-Life International, who recorded for the label run by the specialist record shop Sterns.)

In 1964, the year before he returned to Ghana, Taylor formed by Black Star Highlife Band, which included his onetime Stargazers bandmates Teddy Osei and Sol Amarfio, who were also studying music in London. The Black Stars fused highlife with elements of jazz. “Fela used to say to me, ‘Why are we Africans always playing jazz?’,” says Taylor. “He said jazz was for the Americans and we should be doing our own thing. But of course jazz later played a big part in Fela’s Afrobeat, just like it did in my music.

“Fela often came to my flat in Willesden and we would spend hours playing records by people like John Coltrane, Miles Davis and Charlie Parker and analysing them. Jazz has been a big influence on me, especially guitarists like Wes Montgomery, George Benson and Chuck Wayne – I actually named one of my sons after him. Also Kenny Burrell, he has so much soul. I feel like I’m still playing jazz but with Ghanaian rhythms. There are American influences in my music but there is African culture behind it. Along with jazz, James Brown and funk brought changes to my music. Fela introduced it to Nigerian music and I did the same sort of thing in Ghana.” 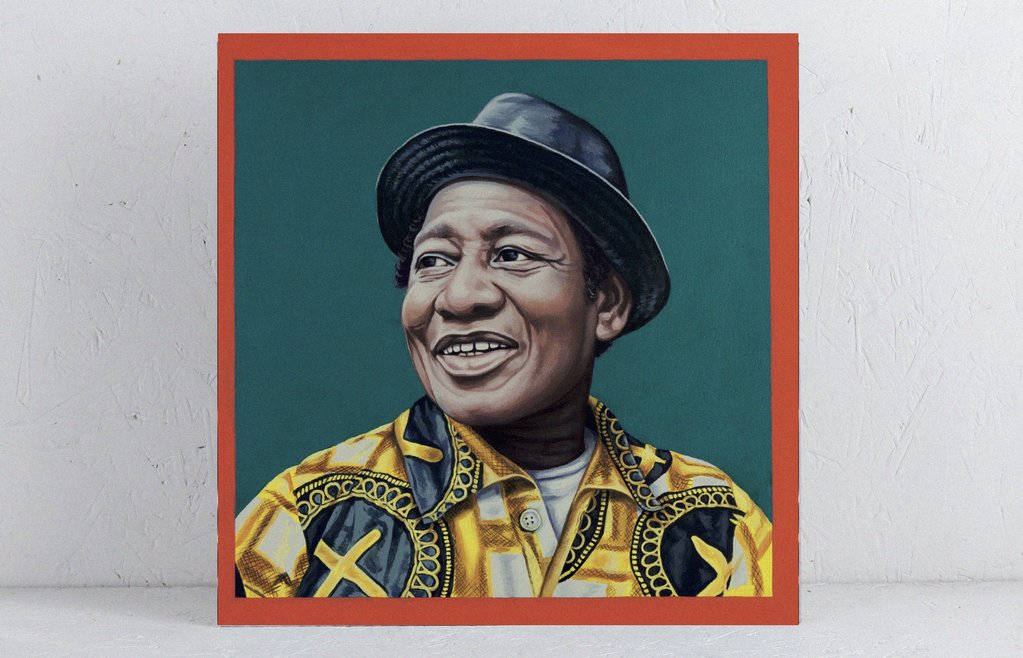 Alongside today’s ever-increasing interest in West African music, says Taylor, a new generation of Ghanaian musicians are rediscovering traditional highlife. “It is still a minority of people who are interested in traditional music,” he says. “Most young musicians in Ghana are getting their ideas from overseas, and maybe mixing in some highlife or Afrobeat. But some people are looking back into earlier forms of music. There’s a new wave that is related to the highlife of the ‘40s and ‘50s. All the older styles got forgotten or ignored during the colonial era, especially in big towns like Accra, where you mostly music from Britain in the clubs.

“That attitude continued even after independence. But in Saltpond City, and all along the Cape Coast, they have never forgotten the traditional music. You can still hear the fishermen singing the songs while they mend their nets on the beach. I do believe that it is important for music to progress, otherwise it just becomes something for museums, but you have to know your traditional culture before you start adding things to it.”

A balance between tradition and innovation was what Taylor aimed for when recording Yen Ara with his group, the Saltpond City Band. There are roots in highlife and Afrobeat, but also elements of jazz and European dance music. “The intention was to follow the path of African music, which our ancestors left for us and which we should not forget,” says Taylor. “The album offers a variety of African music. It’s not all Afrobeat or all highlife. It is designed to show the full scope of authentic West African music – which must not stop.”

At age 81, Taylor has no intention of stopping either. He hopes to carry on performing and recording for years yet. “By the grace of God and physical exercise,” he says.