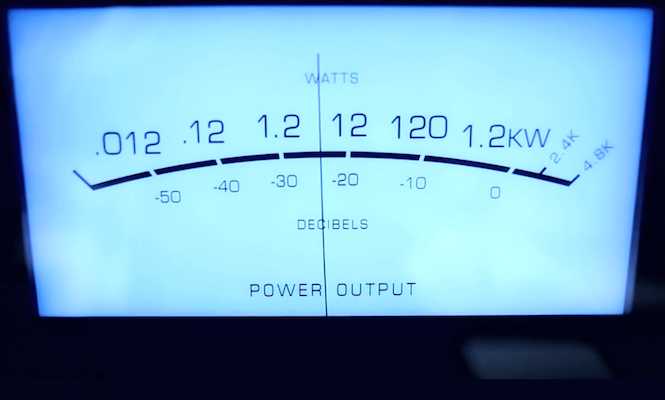 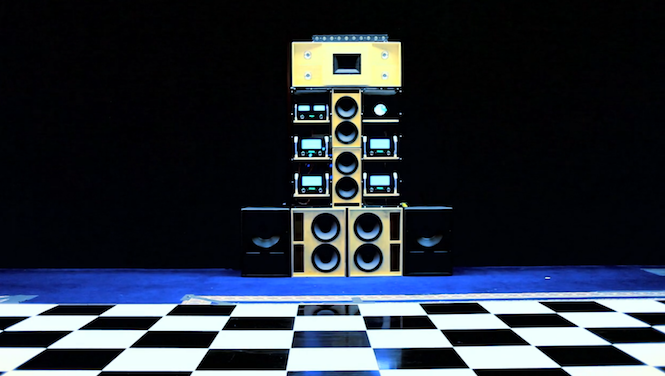 John Klett talks us through the specifics of the astonishing 50,000-watt Despacio soundsystem. Geek out, this is where it gets technical.

“I’m sorry, this is so dweeby” he says, breaking off mid sentence. Standing in the shadow of one of the seven 11-foot speaker stacks that surround the dancefloor at Manchester’s New Century Hall, John Klett is entitled to get just a little bit dweeby. The engineer responsible for building the DFA Records studio with James Murphy has just overseen the concept, planning and construction of one of the most impressive soundsystems on the planet.

Built to play specifically vinyl this rather large hi-fi is as much a feat of technical and acoustic prowess as it is a grand musical statement. Keen to find out a little more about what makes the Despacio so special, we caught up with John after the success of the opening night to talk spec and quickly realised that he was not about to compromise on detail.

As with the in-depth interview with James Murphy and 2ManyDJs earlier this week, we decided to publish John’s explanations in full ahead of our forthcoming video from the event.

Warning: Not for the faint hearted. 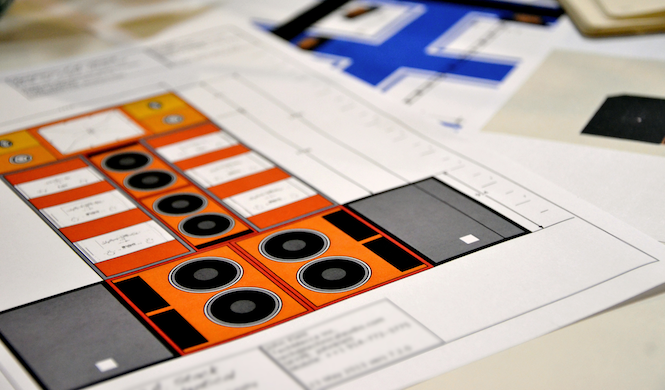 James [Murphy] and I talk about all kinds of things all the time and one of the topics that keeps coming up is speakers. That’s probably the longest conversation we’ve been having, since we met one of the early topics was speakers. And then, where I see that this picked up was when This Is Happening came out, I downloaded it and I have a pair of Klipsch Cornwalls in my kitchen at home, which I crank up pretty loud when I cook and when I want to listen to a new release. So it was cranking away and it was pretty exciting, and so I sent James a text saying “I’m listening to this on my Cornwalls, this sounds awesome”.

And we started having a conversation about… this is dweeby, I’m sorry this is so dweeby… we started talking about the difference between Klipsch Cornwalls and Klipsch La Scala’s and why the bass on one is really cool and why the horn on the other one is kinda cool.

Then a little time went by and then we started talking about finding some speakers and cutting them up and making stacks of them and getting some old McIntosh power amplifiers and powering them up and then it just started to snowball after that. I was thinking we were going to do a pop-up disco in a garage somewhere and then it was rolling forward and it was like “this is in England?”. And by then we started talking to McIntosh about current product because the number of amplifiers I would have had to buy and then rebuild would have been ridiculous. I had no interest. I rebuild gear but not on such a wholesale basis. And so, here we are. 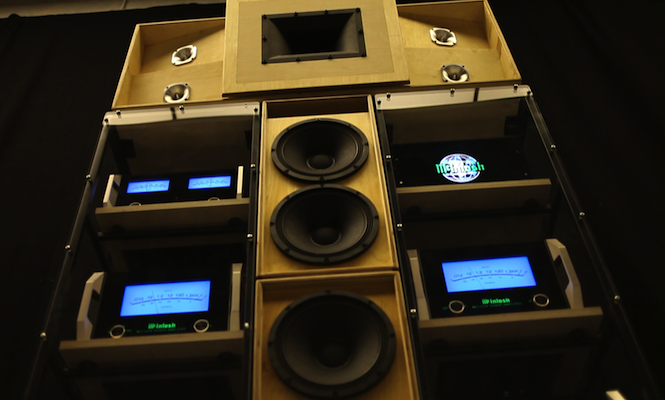 So, you’ve got seven stacks. We’ve built eight. We have seven, set up more of less as a 7.0, because we don’t have a discrete sub-channel and each stack just gets one microphone cable that feeds it.

Each system is 5-way and it’s kinda obvious what it is: There are two 15s and it’s about 9 and a half cubic feet and the vents are huge but they’re not deep. Early bass reflex cabinets didn’t have the big shelf going back or pipes or any of that stuff, so those are tuned ducts; it’s also a reflex, they call them reflex cabinets, but this is where the vent is the thickness of the baffle. 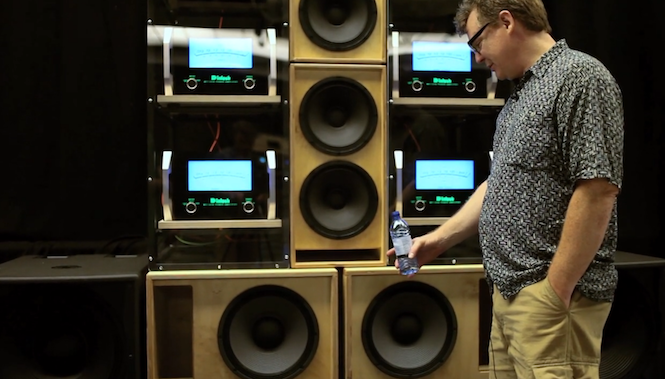 These are really efficient speakers. For most of the night last night we were averaging about 80 watts, out of each of these mono-blocks, but we were getting very high levels in the middle of the floor because these put out almost 100db per watt.

So, same deal with the mids. It’s one mono-block per box. The stereo amplifier, because horns are much more efficient, we only have 450 watts for the horn and for the bullets and we cross these differently – I’m trying to not get too dweeby – but we’re crossing the horn about 2 octaves above what we could cross it at. I don’t like crossing horns near where they cut off. And the bullets are cut off way above where they normally cut off. You’re not stressing them that way, you can actually put a lot more power into them because you’re moving them less.

This thing on the top is called the birdhouse, because that’s where the tweeters live. And the horn thing is actually a drawer that pulls out and tilts down and it’s pulled out to time-align. All this is physically time-aligned, so there’s no timing other than just physical placement. And then the subs were bought in and they’re 21inch subs – pretty loud – and we’re actively crossing them over rather than using the crossovers in the subs.

So these are 1200 watts each, that’s what they’re rated for, they’ll put out a lot more than that. Last night at one point we were running the stack at about 2000-3000 watts, but we had like 10dbs of float on top of that. These things will actually give you a peak output that’s pretty close to 4000 watts peak.

The crest factor, because we’re using vinyl, there’s absolutely no dynamics, there’s no throttle, this is basically ungoverened. They [James & 2ManyDJs] have to control it back there. I have done the gain structure so it would be hard for them, but they could push this thing over the edge I guess, it wouldn’t be pleasant. 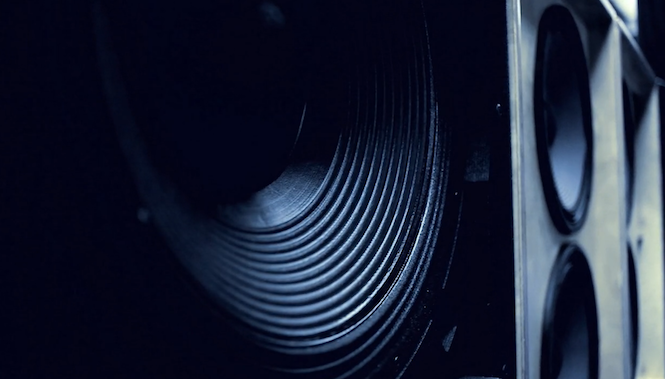 We were running this thing max at about 10dbs below what it could do and we were most of the night running at 20dbs below what it could do and that’s the point, it’s very relaxed. That’s one of the things you listen for. If you hear something that’s harsh just wait until the next record. What I noticed last night walking around is, you put a record on and it would sound awesome. You’d hear the vinyl, cruising underneath of the needle, hear a click and a pop but they’re not going bang, you know it’s just a click and you hear all the dynamics and everything in the groove. It’s pretty groovy.

Before they hung the mic and with nobody in the room I had it up to 125db a-weighted and about 140db c-weighted, which is ridiculous. Didn’t do that for very long, but it worked, it was clean. Right in the middle of the dancefloor when things were really cooking, I’d be looking at the meter and we’d be at a very relaxed 105db to 115db at points but it goes up and down. You sort of have to average it, partly because of health and safety, because you have a three-minute running average. 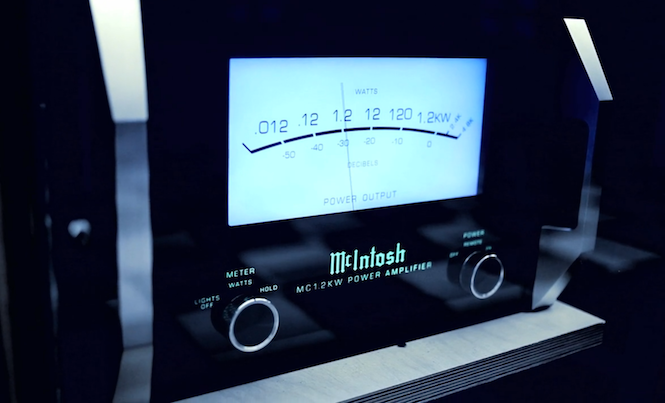 Most amplifiers, transistor amplifiers and all the class-D amplifiers which are kind of a different thing, they won’t give the most power unless you are just pushing as much current as you can. Like when you put in a car stereo system, like all the drivers that are made for running on car stereos, they have dual windings and so you have two 4 ohm windings and you can hook them in series to get 8 ohms or you can hook them in parallel to get 2 ohms and everybody runs 2 ohms so that you can basically just get the most current.

So any of your transisitor amplifiers other than McIntosh, the lower your impedance load the more power, and when you look at power ratings you’ll see “oh it will do 400 watts into 8 ohms it will do 800 watts into 4 ohms”. These will do their full power into 8 ohms because they have an output transformer – they call them an autoformer.

Almost all the amplifiers that McIntosh have ever made, starting with tubes and going through transistors to today have an autoformer output and that means if you have an 8 ohm speaker you can get all 1200 watts out of this amplifier into that speaker because you’re going out of a transformer that steps up the voltage. Power matching is what it is. 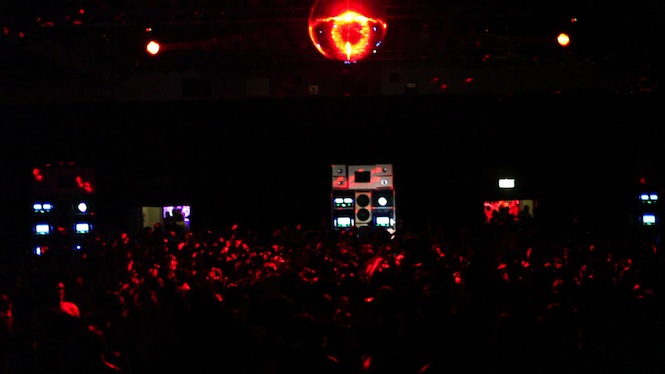 Last night everybody was happy. James was happy, Steph and Dave were happy. The managers, agents were happy, you come out onto the floor, everybody’s happy. What else could you want? It’s very low stress, the system is so relaxed sounding that even at ridiculous levels it’s pumping right along.

Despacio was premiered at the Manchester International Festival on 18th, 19th and 20th July at Manchester’s New Century Hall. 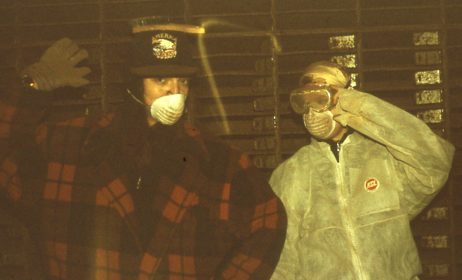 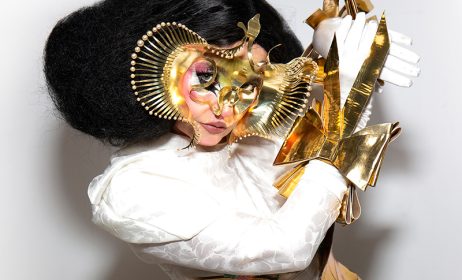 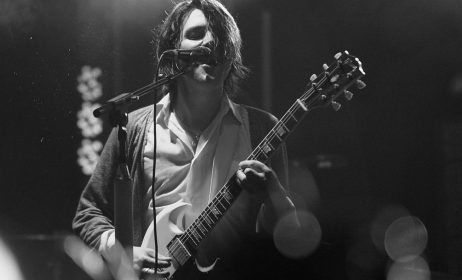