The colourful improvisations of Bráulio Amado’s The Juan MacLean artwork

Every month, graphic designer and writer John Foster unpacks the making of a new album cover, discussing the finer details of the design, and the processes behind it. This time, it’s The Juan MacLean’s The Brighter The Light. 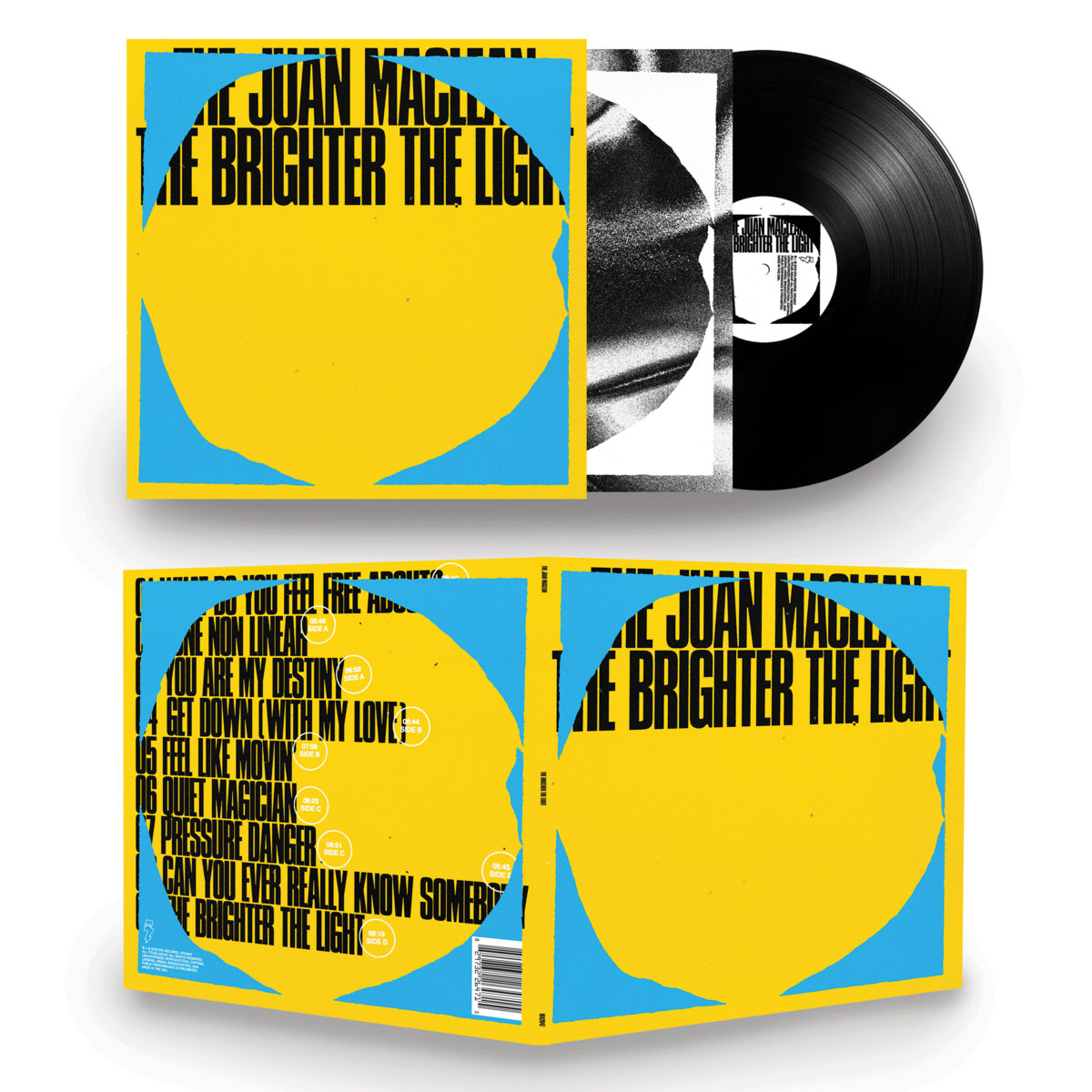 The Juan MacLean
The Brighter The Light
(DFA)

Given that The Juan MacLean (aka John MacLean and Nancy Whang) released The Brighter The Light to collect recent 12″ singles as a double vinyl set, it’s no surprise designer Bráulio Amado leant heavily into the aesthetics of club-ready vinyl for this beautiful gatefold.

Fresh from working on Róisin Murphy’s Maurice Fulton 12″s in 2018, Amado has established himself as one of the hottest designers in the music industry. And as a longtime fan of The Juan Maclean – having produced a number of posters promoting MacLean’s DJ appearances at Brooklyn’s Good Room – Amado was moved onto the album artwork by DFA’s Jonathan Galkin.

After presenting a few sketches, the concept of the negative circle, which dominates the sleeve, was agreed upon. “I was really set on this idea of this simple blue and yellow shape, and nothing else,” Amado explains. “I actually kept trying to do different iterations on it but nothing looked quite as good, so we went back to the original sketch.”

While the bold power of the shape of a record was clear, something important was missing. “It just didn’t look like a dance record,” he admits. “I needed that vibe and to match the music inside, so the typography was added to make it all more playful.”

The key to the success of the the typography stems from its relationship to the negative circle, which is placed directly over the blocky, stylish type, as if screen-printed onto an old ’60s jazz sleeve. The same is true of the running time circles dotted across the back. This boldness is not just in the colour and shape, but is inherent in the application of the elements.

With a gatefold to play with however, there’s a reward for those who have the pleasure of opening it. “Originally I wanted to make the outside a reflective or neon ink,” Amado explains, “but then I thought more about the payoff I wanted to have on the inside, so we kept it simple with the printing.” Swinging open the record reveals two panels of Amado’s wild and colourful artwork. 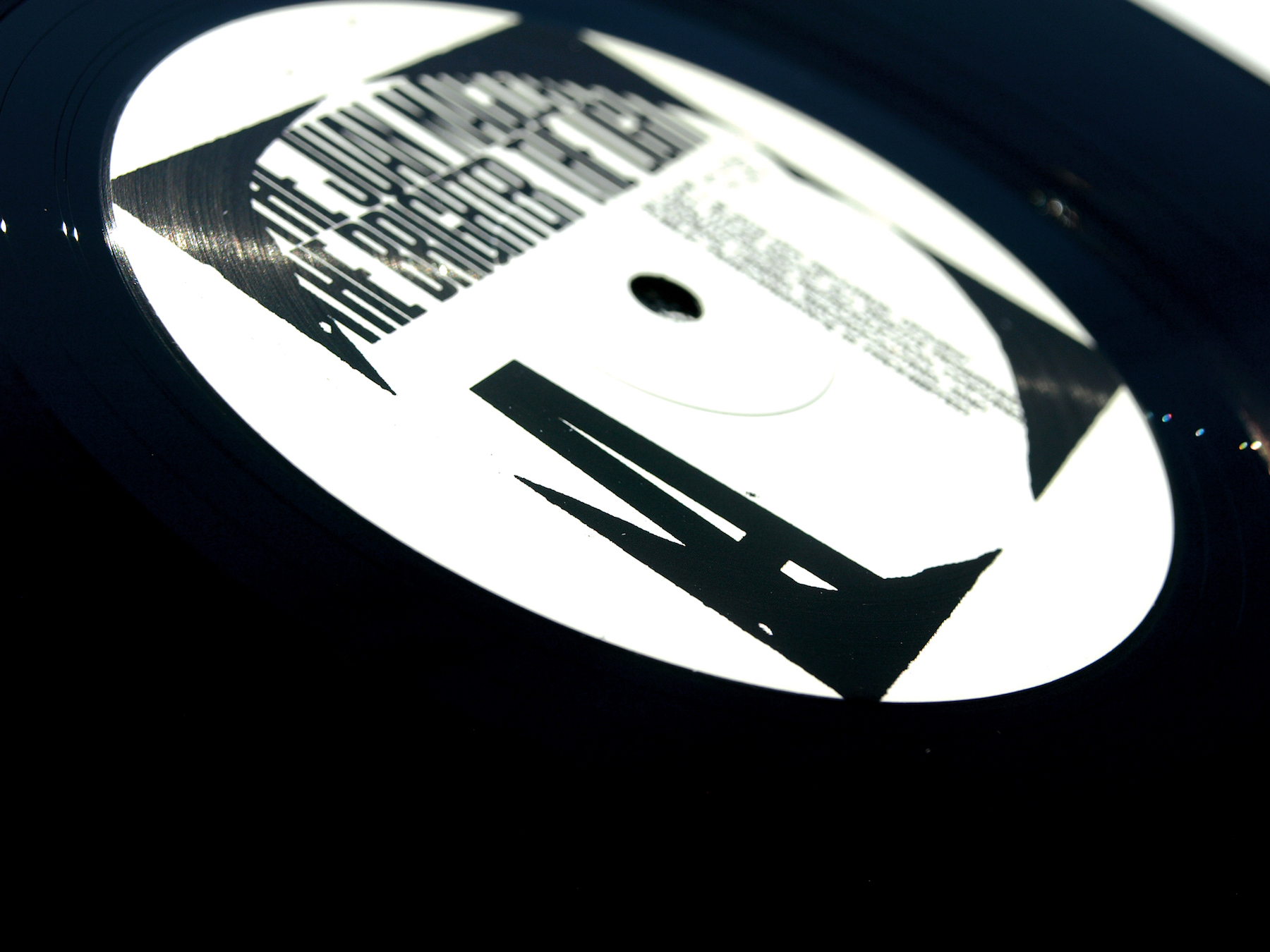 “This project truly pushed me to figure out this new style,” Amado says. “The logical direction for the interior was something minimal and geometric like the front cover, but that just felt too easy and obvious. The record is called The Brighter The Light, so I wanted it to feel like someone just flashed something in your face when you open the gatefold.”

“I wanted it to feel unexpected and overwhelming, but that didn’t happen until I started trying to do stuff outside of what I normally do,” he explains.

Amado began wildly pulling the shapes as if they were elastic putty, adding in neon colours and noisy texture. However, having felt like he had solved it, he lost sight of the 2×12″ template it would need to live in. “I had something that started to feel right, but then I couldn’t fit it into the space properly, so I took that as a sign and when I tried to recreate what I was doing earlier, it took me in a totally different direction,” he explains.

Digging back in, he swirled the existing colourful elements as if he was painting with his hands, creating a unique clash of colour and movement. The end result was a triumph: “Suddenly the wild ride was over – crazy and brilliant – lights on and shining right in your face!”