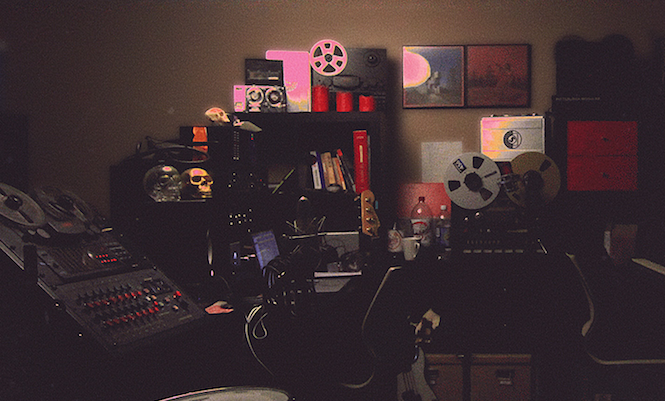 Here’s how: we asked Robin and Clinton at Norman Records to “give us anything with a song in it” and sure enough they delivered the goods once more. Here’s a record that’s as good to listen to as peanut butter is to eat with your hands — but with less inevitable shame. On ‘Weird Sister’, Joanna Gruesome knotted noise rock dynamics together with the snark of twee pop. Both are back here, sitting happy like good/bad angels leaning on your shoulder. More blastbeats, please. Psych rock that takes you somewhere without ever leaving the studio, Jacco Gardner has made a galaxy from his ornate pop, then flattened it out with a production job that sounds smooth and grounded. Silly and full of instrumental flourishes, it’s the cosy warm bass you’ll be left with between your ears. Ilyas Ahmed
I Am All Your Own
(Immune)

The translucent ghost guitar of Ilyas Ahmed will take listeners back to Liz Harris and her shelter-from-the-storm drones, which is no surprise, as Ahmed has released an album with her as Visitor. On his new record, he also references the homely ambient sing-song of Benoit Pioulard, sadly sighing over watery strums. Sound poet Jenny Hval has already made spectral folk and abstract noise, using her music to investigate the way human bodies constrict with social norms. For her third record, she joins the goths in Brooklyn for a radical synth seminar: more questions about where we’re at as a collective civilisation, channeled through music that’s interchangeably her harshest and most accessible. The KVB
Mirror Being
(Invada)

The darkwave duo that sound like tall pillars in an empty room return with an album of towering synths, chilling atmospheres and uncomfortably thrilling beats. This is bright but eerie industrial pop — it’s as if it were being played underneath a cold sun. The messiest bunch of garage rockers who ever didn’t clean out the Castle Face office fridge, Thee Oh Sees are back with yet another record of misshapen, gleefully distorted clusterfuckery. It is, of course, lovingly moulded into pop music. There are so many re-issues about these days that it’s actually harder to think of an album that hasn’t been re-issued. This is one which sticks out from the herd though. Able Tasmans were a woefully underrated New Zealand band from the ‘80’s with a grab bag of styles, from dark scratchy indie to bagpipe pop. Well worth checking if you like the Chills, the Clean etc. The be-cardiganed pop master has spent many years making harsh noise from his Japanese hideaway, frustrating the legions of fans who enjoyed his ‘Insignificance’ and ‘Eureka’ albums. ‘Simple Songs’ should satisfy such cravings with its complex and winding take on progressive folky pop. Art-pop freaks Unknown Mortal Orchestra have discovered their inner Prince with this exuberant selection of clattering soul and funk inspired tunes. Coming across like a Stevie Wonder with his hands glued together it is sure to get the lop-sided party started. Hitting the sweet spot between Slowdive ‘Pygmalion’ era atmospherics and Beach House/Mazzy Star drifting hazy songwriting are the unassumingly named Valet. With
a name and sleeve you’d fail to notice in a crowd, the group comes into its own once the needle hits the record. Swoon-some stuff from the ever-reliable Kranky imprint.

The 10 best vinyl releases this week (25th May)