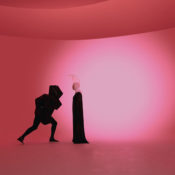 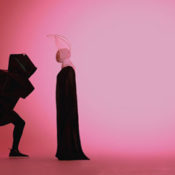 Nick & Chloé
Hailing from Dublin and Paris, Nick West and Chloé Claverie started their creative partnership in 2005. Since then, they have produced a varied body of work using colourful, graphic visuals to explore the worlds of fantasy and childhood. The duo’s most notable project ‘Are We Hard Yet?’ was collaborated with Zeitguised studio and combines photography with CGI modeling. ‘Are We Hard Yet?’ was awarded the American Photography prize in 2013.

Nick and Chloé’s work has appeared internationally in magazines such as Milk, Vanity Fair, WAD, Vibe, Surface, Architectural Digest and Cookie. Other portrait subjects include Kanye West, Keira Knightley, Patrice Evra, Luciano, and Kyary Pamyu. Nick and Chloé’s work has been exhibited at the Hamburger Bahnhof and the Temporäre Kuns-thalle in Berlin, as well as the V&A Museum in London. Their first motion picture ‘The Cat Cave’ featured Zahia Dehar dancing for a giant rubber black cat and proved to be an international hit.

As a member of Parisian band Club Cheval, a solo DJ and as one part of the Bromance Records unit, Sam Tiba escapes on his own with the release of his ‘Samuel’ EP this September. With musical influences coming from the American underground, from Miami to Baltimore, Sam continues to push forward as an intriguing musician with his sensual and dreamlike productions.

If you like sensory-rush of Rustie and The Weeknd then these three new cuts are sure to appeal. Pressed on 180-gram vinyl, housed in a full color sleeve with artwork by celebrated creative duo Nick & Chloé – limited to 500 copies worldwide.

Born in Roubaix in 1985, Sam began by studying theory at the local Academy of Music and learnt how to play the trombone, not your average instrument. In 2009, he met with his Club Cheval stooges from Lille (Panteros666, Myd and Canblaster) and they all agreed to start working on a sound of their own, somewhere between up-tempo rhythms with rave touches and R&B. Shortly after, Club Cheval were criss-crossing the planet as DJs and each member also working on solo projects. Their first album together should see the light of day in 2015.

For Sam, the solo adventure started in 2011 on Marble (the record label of his friends Para One and Surkin & Bobmo) when he released his first EP, “Black Eyed Weed”, followed in 2013 by “The Saddest Show In Town”, on Pelican Fly, Cashmere Cat’s parent company. Following the release of ‘Samuel’, Sam plans to regroup his music and creative endeavours into an album to be released in the near future.

Open The House
Add to cart
£15.00
We use cookies on our website to give you the most relevant experience by remembering your preferences and repeat visits. By clicking “Accept”, you consent to the use of ALL the cookies.
Cookie settingsACCEPT
Manage consent