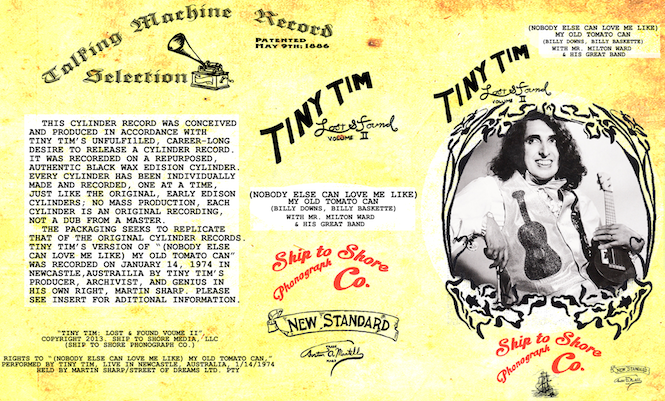 Earlier this year, some statistics emerged that although young people were responsible for the surge in vinyl sales, almost a third didn’t own a turntable to play the records they were buying. If octogenarians are to be responsible for the resurgence of the Edison or phonograph cylinder, chances are they won’t have a phonograph player either.

Taking the 21st century obsession with retro sound carriers to a new level, Tiny Tim obsessive Justin Martell is set to cut previously unreleased material from the late American ukelele enthusiast’s archive to phonograph cylinder – “a medium that hasn’t seen a wide release in close to 100 years by a major recording star.”

Enlisting Benjamin “The Victrola Guy” Canaday to produce a run of 50 cylinders of Tiny Tim’s “Nobody Else Can Love Me (Like My Old Tomato Can)”, Martell explained the rationale behind releasing on the wilfully obscure format to Time magazine, saying that “in today’s market it’s special edition and collectors’ items that really sell. This is what people are interested in, I think. It’s the extreme version of vinyl.”

Reproducing original phonograph artwork, Tiny Tim’s “Nobody Else Can Love Me (Like My Old Tomato Can)” is available to order from Martell’s website and comes with a download code featuring the recording played through three types of horn contemporary to the era for collectors who doesn’t own a phonograph player themselves. [via Time]

Click here to find out how a phonograph cylinder is made and here to see Beck’s use the technology to cut new tracks into the surface of a beer bottle.

Listen to Tiny Tim in action on the phonograph cylinder below:

Back to School: Music made by children in schools compiled on new Trunk Records release