Conrad Shawcross’ ADA Project opens at The Vinyl Factory in London this weekend.

It’s not every day you get to hear a track where the machine is the one doing the dancing. Invited by Shawcross to his ADA Salon for a residency, Herndon spent ten days with the mechanical device, choreographed by Shawcross to respond to ratios detailed by Victorian inventor Charles Babbage and his assistant Ada Lovelace for their visionary yet ultimately flawed early computer The Difference Engine.

Immersed both in the story of Ada Lovelace and the movements of the robot that now bears her name, Herndon’s track ‘Relations’ is built from chording the interference patterns of the microchips within the computer as well as recording some of the sounds of the machine itself to create a stark and industrial soundscape that ebbs and flows with all the physicality and emotional pathos of the robot.

Holly Herndon’s ‘Relations’ will be released as a limited edition vinyl 12″ and regular edition by The Vinyl Factory alongside tracks from the projects other collaborators Mira Calix, Beatrice Dillon & Rupert Clervaux and Tamara & Mylo. You can stream Holly Herndon’s track ‘Relations’ below now:

The limited edition vinyl of all four tracks will be restricted to 100 copies each pressed onto etched 12″, with every record including a fine art print on 300gsm Somerset signed by Conrad Shawcross. Click HERE to pre-order now ‘Relations’ now and HERE to see all other ADA Project editions.

Conrad Shawcross’ ADA Project is open to the public free of charge from 11th October until 31st October, on the top floor of The Vinyl Factory’s Brewer Street Car Park space, Brewer Street, London, W1F 0LA. Click HERE for more info on the show and how to visit. 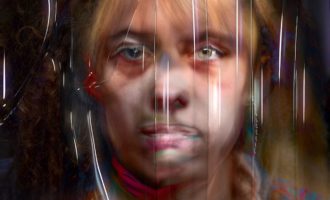