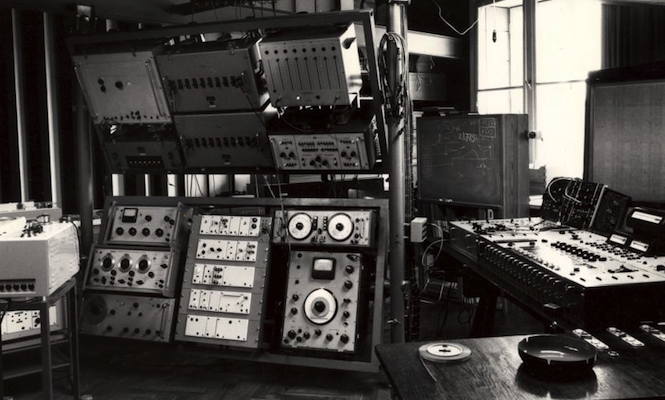 Formative sound and image experiments between 1957 and 1984 to be collected at London’s Calvert22 Foundation.

Capitalising on the relative artistic freedoms afforded in the aftermath of Stalinism, musicians and composers of the Eastern Bloc turned to electronics for expression. Building on a fine tradition of sonic exploration and a fascination with the avant garde that would connect the invention of the Theremin in 1928 to the evolution of synthesizers and tape looping, artists from across Poland, Hungary, Czechoslovakia and beyond brought sound and visual art together in revolutionary ways.

Based in laboratories and studios which took their lead from Warsaw in 1957, artists like Fluxus pioneer Milan Knizak, Sots-Artists Komar & Melamid, Hungarian artist Dóra Maurer and composer Zoltán Jeney opened the dialogue between art and music through films, ‘happenings’ and sounding installations.

Knizak famously created a series of “Broken Music Compositions” in which he doctored and destroyed vinyl records, which when played back skip like an untuned radio.

In doing so, they balanced the intellectual freedoms typified by the Prague Spring in 1968 with an increased anxiety over censorship, articulating a mechanistic and often utopian future by manipulating machines and electronics to reflect human hopes and fears.

It was a period influential on contemporary artists like Christian Marclay, who has recently released his debut work Groove on vinyl and Haroon Mirza, who you can watch here, discussing the liminal space between art and electronic music.

Originally displayed in the Polish city of Lodz last year, Sound The Body Electric: Experiments in Art and Music in Eastern Europe 1957–1984 opens on 26th June and will run until 25th August 2013. Click here for more info.

For a selection of Eastern Bloc cover artwork, click here.