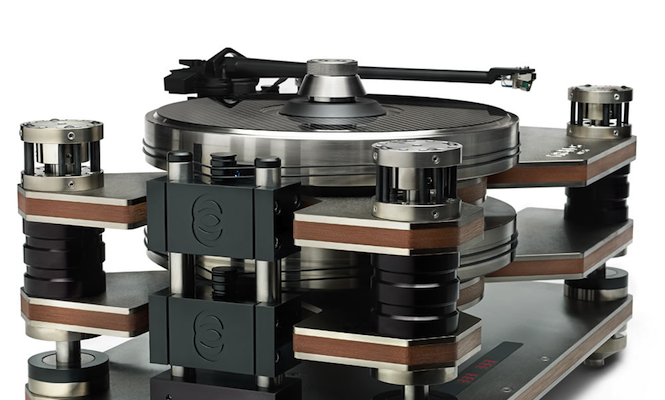 It may look like it’s been jibbed from Bruce Willis’ asteroid-busting Freedom space shuttle, but the Hammacher Schlemmer turntable is probably the most hi-end piece of audiophile kit you’ll never have the opportunity to hear.

Priced at $28,000, the counter-balanced (non-exploding) device holds the turntable in suspense “to eliminate the troublesome sonic aberrations generated by common consumer models”, with the clockwise turntable set against an anti-clockwise spinning platter to eliminate the torsion forces that can interfere with the rotation of a record. Oh, those pesky and troublesome sonic aberrations.

Designed by German manufacturer Hammacher Schlemmer and winner of the Best Sound High Fidelity award at Munich High-End (apparently the largest high-end audio showin the world), this beast of a turntable will at last allow you to listen to your Chas N Dave rabbit-shaped RSD picture-disc in perfect audio fidelity. That is, as long as it isn’t scratched…

For more technical mumbo-jumbo and details on how to order one of these awesome machines, visit the Hammacher Schlemmer site.