Petition launched to change the plural of ‘vinyl’ to ‘vinyls’ 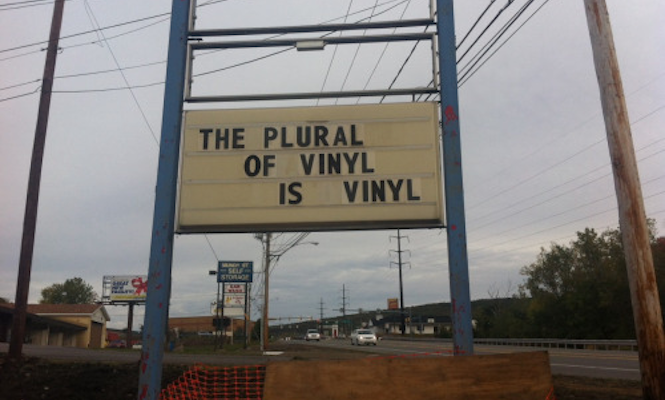 The plural of vinyl is still vinyl.

Some plural noun forms don’t carry an ‘s’. Sheep, fish, and deer are just three examples. Vinyl is another. However, a small group of brave (perhaps fool-hardy) record collectors have started a petition to overturn this grammatical truism in favour of inclusiveness, arguing that the abuse levelled at ‘complete strangers’ who use the term vinyls to describe records is damaging the vinyl(s) community at large.

There is a small but vocal cabal among the vinyl enthusiast community who seek to control the language of our hobby via bullying and ridiculing those who use the term “vinyls” to describe 2 or more units of vinyl recorded media. In an effort to promote inclusiveness, we would like to have the term “vinyls” enshrined as the official plural term for vinyl recorded media.

This will also serve the essential purpose of annoying people who would rather ridicule a complete stranger than say something encouraging to a fellow “vinyls” collector, especially those who may be just getting started in the hobby.

At time of writing the petition had received just 23 signatures, although support for ‘minimizing douchiness’ and ‘ruffling the feathers of Grammar Nazis’ [sic] were cited as reasons for signing. You can add your name or further ridicule those who have here.

While we’re all in favour of inclusiveness, this is obviously complete nonsense, and can confirm that the plural of vinyl will continue to be VINYL. [via Exclaim]

Are we about to get 'high definition vinyl' technology?