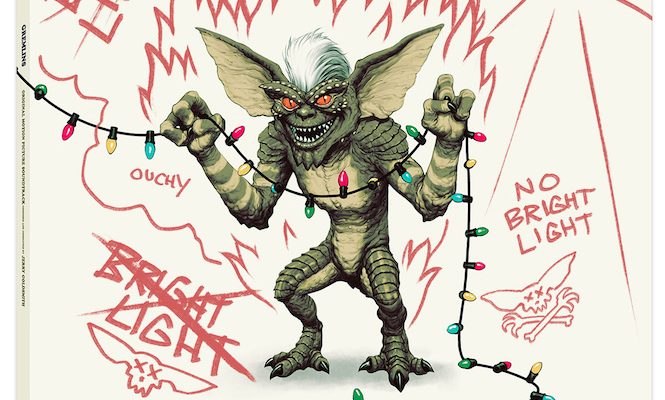 Defying conventional wisdom, to really get the most of Mondo’s forthcoming reissue of the Gremlins soundtrack, you’re doing to have to expose it to light…. and water.

Released in time for Christmas, the reissue of the 1984 classic composed and conducted by Jerry Goldsmith features one of the most daring record sleeves we’ve ever come across.

Designed by Phantom City Creative, the 2xLP release is housed in a ultraviolet-sensitive gatefold jacket that reveals hidden messages when exposed to daylight, while the inner sleeves are water-sensitive, revealing additional artwork when rubbed with a damp cloth. Depending on the time of day, the cute and evil Gizmo’s on your sleeve will be accompanied by furry friends or allies.

The release follows another interactive piece of Mondo packaging, with the label’s Fight Club reissue housed in an IKEA-themed sleeve that you have to destroy in order to use.

Check out the Gremlins gif below and look out for the the record from 30th November. [via EW]