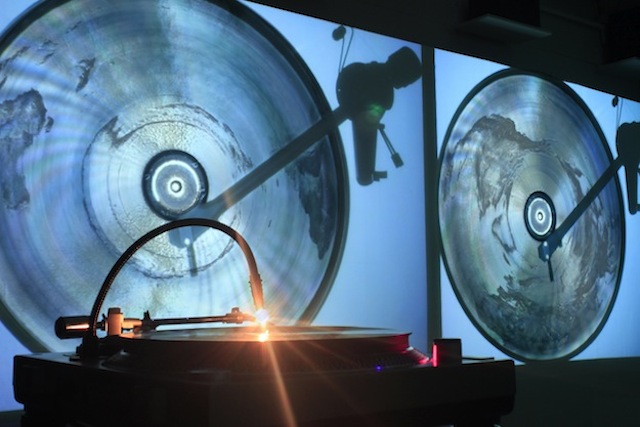 What does Planet Earth sound like? Honestly? A scratchy mess. Or, if you’re feeling romantic, an elemental spatter about to emit an explosion of life, like the scrape of a match as it is drawn along the phosphorous, moments before bursting into light. Or something like that.

Titled “Flat Earth Society”, the Art of Failure collective have mapped the topography of the Earth’s surface into the micro-grooves of a vinyl record, the depth of the engraving corresponding, on a minute scale, to the valleys, hills and mountains of the earth.

It’s a fascinating and barmy idea, the photos and films of which are utterly hypnotic. Strangest of all, just like a stylus creates a the grooves which it then plays, mapping the surface of the earth onto a vinyl record generates the echo of an image of the northern and southern hemispheres, as viewed from space.

Here’s how the project’s Douglas Kahn described the phenomenon:

“Can we hear the Earth? Not the sounds occurring upon it but the Earth on a geophysical scale? […] The hill-and-dale technique was used in Edison’s phonograph, recording sound with a stylus that vertically cut a minute landscape into the grooves of the cylinder. […] Flat earth society takes readings from the stylus of topographic radar, cuts them into vinyl and then plays them back with a stylus. Phonographic hills-and-dales grow into the Alps, Andes, Himalayas, Grand Canyon, Great Steppe, Great Rift Valley, Great Outback and the Lesser Antilles. Peaks and valleys, spikes and wells, spires and troughs, aspirations and depressions, all have their gradations in mythical and actual landscapes.”

Watch the in-depth description and full video below, and if you’re feeling adventurous, pore over the presentation in its entirety here.

Although this project has been around since 2011, we discovered it again today via sound artist Maria Chavez’s article for The Wire.

Behind The Counter: Sounds Of The Universe pick their Top 5 new vinyl releases

CHIRP, BZZZZT, SCRIBBLE, THWOMP: A turntablist's appreciation of the work of Haroon Mirza