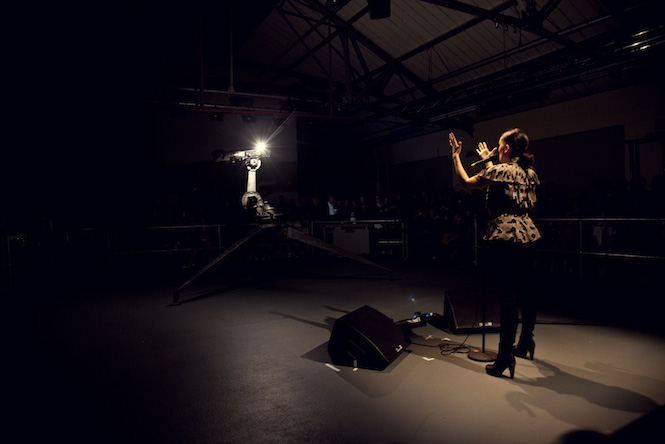 The ADA Project is currently open to the public and available to buy on vinyl.

For Conrad Shawcross’s ADA Project, four renowned female artists were invited to create compositions in response to a dancing robot, programmed and hacked by the London-based artist himself. The idea was to reverse the traditional commissioning process – rather than a machine responding to music, instead the machine is the primary source of inspiration.  The result is a unique, collaborative artwork consisting of four robotic choreographies, each with an intrinsically connected composition. Click HERE to stream a Conrad Shawcross podcast on The Ada Project.

The first composition is by Beatrice Dillon and Rupert Clervaux, who use the robot as percussion, sampling rhythms played on different parts of its housing. This was edited with field recordings of the engine, the vibration of the tripod legs and the tonal resonance of  the machine’s metal parts.

Listen to their piece ‘Sequence 1 (Notes Upon Woven Strings)’:

The next composition is by Holly Herndon. Using a combination of vocal processing, synthesis and recordings of the robot in motion, Herndon attempted to emote the sentience implied in the robot’s movements as she curiously probes and surveys her environment.

Listen to her composition ‘Relations’:

The third composition comes from Mira Calix, who creates a narrative lament in which soprano Terersa Duddy sings to the robot, willing it to fall in love with her. The machine’s movement of languid strokes suggests that it reciprocates her overtures.

Listen to Calix’s composition ‘If Then While For’:

The final composition is the work of songwriter and vocalist Tamara Barnett Herrin (Freeform Five), backed by DJ/Producer Mylo. The work links mathematics with disco through their shared power to induce ecstatic  states.

Listen to ‘Ada Make A Bed For Your Phoenix’:

All of the tracks from The ADA Project tracks have been pressed on to individual limited edition vinyl records. Click HERE to find out more.

Conrad Shawcross’ ADA Project is open to the public free of charge from 11th October until 31st October, on the top floor of The Vinyl Factory’s Brewer Street Car Park space, Brewer Street, London, W1F 0LA. Click HERE for more info on the show and how to visit.

It’s Machine Music Week at The Vinyl Factory. Explore our robot-related content below: