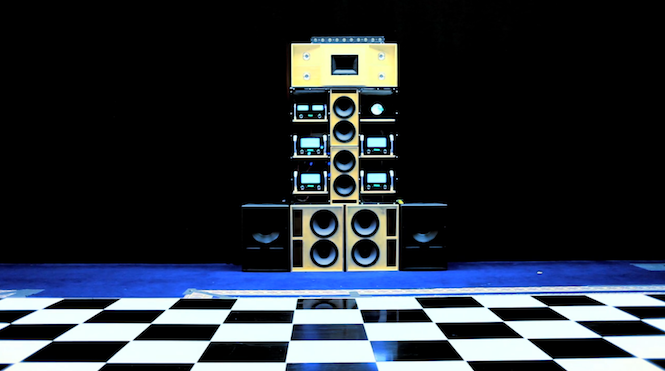 Despacio AKA “The biggest audiophile soundsystem in existence” set for December debut in the capital.

The wood-panelled Ballroom at Hammersmith Town Hall will not have ever heard or seen anything like it. In fact, complete with 1930’s sprung-dancefloor, it is far from the kind of venue you’d associate with a “revolutionary new clubbing experience”. Then again, when has James Murphy ever done things by the book? Having wowed crowds at Manchester’s New Century Hall (a conference room turned disco mecca, itself not your average venue) at this year’s Manchester International Festival, the towering Despacio rig piloted by messrs James Murphy and Soulwax/2ManyDJs brothers David and Stephan Dewaele is set to make its full-blooded London debut on 19th and 20th December.

To describe the Despacio experience as ‘revolutionary’ is to only tell half the story. The concept guiding the seven 11ft speaker stacks that embrace the dancefloor is state-of the art in its simplicity. A night of music, played entirely on vinyl, where the focus is on sound quality, dancing and good times. Of course it also helps if you happen to be powering that party with “the biggest audiophile soundsystem in existence”.

Watch our mini-documentary about Despacio at the Manchester International Festival.

While the spectacular McIntosh amplifiers – 42 of which are nestled in the rig helping Despacio average 100db on the dancefloor – take care of the sound, the success of Despacio lies in its inclusivity. “I don’t feel like it’s small and snobby and elitist” explained Murphy when we spoke to the trio ahead of their second Manchester show, it’s “a place where all different kind of records sound good and it’s a pretty open environment where the music is quite open and the people are quite open and it’s a nice big space”. [Read the full interview here.] 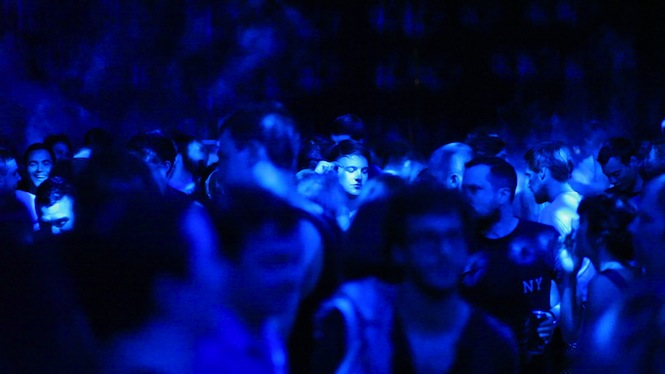 Reclaiming the passion and attention to detail that defined New York’s iconic discos like the Paradise Garage and Studio 54, Despacio (meaning both ‘slow’ and ‘gradually’ in Spanish) harks back to the golden age of the vinyl disc jockey, where considered selection trumped artificial highs and the music was all that mattered. Making a point to differentiate Despacio from 2ManyDJs’ festival gigs which David suggests are defined by “lights, confetti [and] lazers”, Murphy describes the trio’s role as breaking away from the cult of the DJ. “We’re the projectionists – that’s the screen”, he asserts on the press release. In Manchester, the trio had close to 800 records behind the DJs booth, the autonomy to choose playing a crucial role in the organic development of the evening’s entertainment. 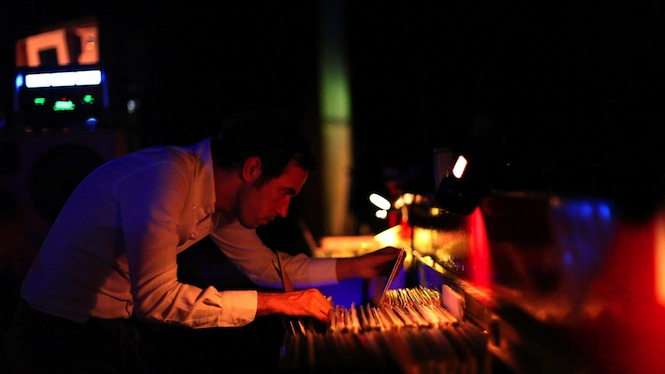 Born out of a vision of a utopian dancefloor experience against a Balearic sunset on the island of Ibiza, Despacio has evolved into the world’s most impressive mobile disco; a party bound by a concept that informs its every aspect. Designed by DFA studio engineer John Klett, the rig is pitched to reproduce the music, as it is pressed on vinyl, in its most natural form; loud but not harsh, enveloping but not stifling. As John told us in Manchester: “You put a record on and it would sound awesome. You’d hear the vinyl, cruising underneath of the needle, hear a click and a pop but they’re not going bang, you know it’s just a click and you hear all the dynamics and everything in the groove. It’s pretty groovy.” [You can read the full interview with John Klett on Despacio’s technical make-up here.]

Despacio will transform the Ballroom at Hammersmith Town Hall for two nights on 19th and 20th December and tickets for both nights are available to buy HERE.