“Bright and beautiful”: Listen to a brilliant podcast on The Infinite Mix and Jeremy Deller’s bonkers Japanese dancehall adventure

“We rarely do shows on just one thing, but this is so good we wanted to shout it from the rooftops.”

Whether it’s five star reviews from the Evening Standard and Time Out, acclaim from The Guardian and the Telegraph or the assertion from Creative Review, that this was finally “proof that video art can truly be a force for our times,” it’s safe to say The Infinite Mix is making waves.

In this 30-minute podcast recording of Robert Bound’s Culture show on Monocle 24 Radio, Bound discusses the exhbition’s big ideas with Hayward Gallery curator Ralph Rugoff, who has masterminded what is the gallery’s only off-site show during its two-year refurb.

Then there’s The Vinyl Factory’s own Sean Bidder, who talks about the connection between the A/V experience of vinyl, The Infinite Mix, which transposes image and sound into a physical space, in this case the brutalist aesthetics of 180 The Strand.

Last but not least, Bound catches up with Jeremy Deller, whose film with Cecilia Bengolea ‘Bom Bom’s Dream’ follows Japanese dancehall queen Bom Bom on an acid-laced Alice In Wonderland trip to Jamaica.

You can listen to full 30-minute show here and visit The Infinite Mix for free at The Store, 180 The Strand from Tuesday to Saturday 12pm – 8pm and Sunday 12pm-7pm. 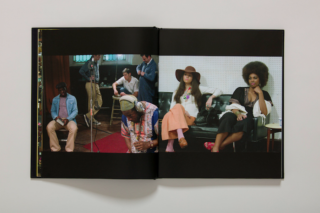