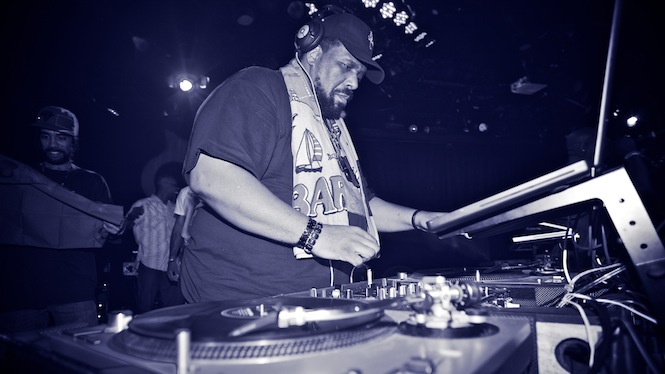 Duo will play a series of sets using only records taken from the hip hop pioneer’s 40,000+ strong vinyl collection.

The most important record collection in the history of hip hop, and one which has indirectly informed the genre as a whole, Afrika Bambaataa’s astonishing 40,000+ collection is to form the basis of a five week tour by veteran DJs and producers DJ Shadow and Cut Chemist.

Currently being archived at Cornell University, the collection went on show in New York last year and will now be given a more dynamic airing across the United States and Canada, with Shadow revealing to Rolling Stone that the tour will include six turntables, two mixers, a drum machine and a whole host of vintage gear, in order to “tell Bambaataa’s story in music, via the records he owned and made.”

As Shadow explains further: “Our focus was three-fold. Bambaataa as artist, including his seminal Tommy Boy releases; Bambaataa as collector and break discoverer; and Bambaataa as musical missionary for social change.”

He continues: “We tried to take anything that was sampled and made famous in rap records we all grew up with,” adds Cut Chemist. “We also chose anything directly connected to him whether it was related to him as an artist or if he made an appearance on it. We want to represent Bam’s legacy as a recording artist and as a musical tastemaker.”

Tickets for the tour go on sale Friday, June 20th, for the dates below. [via Rolling Stone]