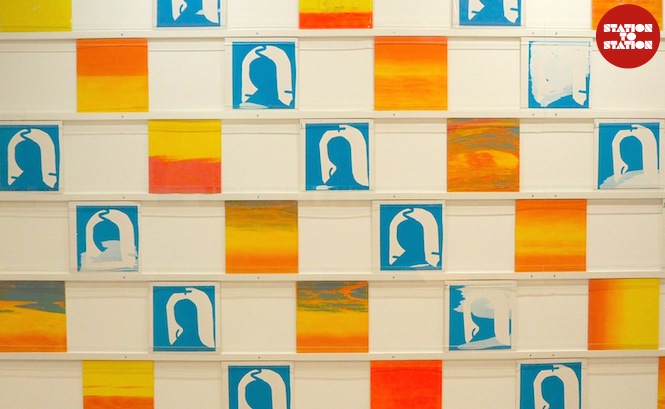 Building on his 2013 project Station to Station, Doug Aitken’s month-long, building-wide, art intervention at the Barbican is now underway. For the duration of the show, you can witness our on-site mobile pressing unit, the VF Press, pumping away as the music created for the project is pressed onto limited vinyl.

Hot off the VF Press this week are four records recorded live on a moving train as part of the original Station to Station, which crossed North America by train from Atlantic to Pacific over 24 days in 2013.

Each record is pressed in a limited run of 300 and features screen printed and handcrafted ink artwork by Fraser Muggeridge Studio. Order copies from VF Editions and scroll down to listen to the records.

White Mystery is a brother-sister rock’n’roll duo, Miss Alex White and Francis Scott Key White, from Chicago. The band are known for their relentless tour schedule (300 shows in three years) and have played with national acts such as Garbage, Shonen Knife, The Stooges and Weezer.

Lucky Dragons, Luke Fischbeck and Sarah Rara, are an experimental music duo based in L.A. They are noted for their unusual sound, described as having the ability to make “‘everyday sounds’ become alluringly other”.