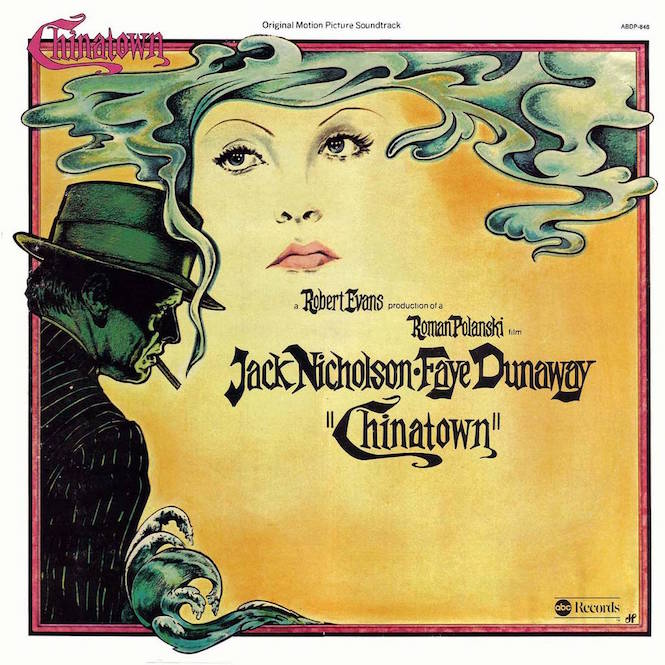 The soundtrack to Roman Polanski’s neo-noir mystery Chinatown is getting its first ever vinyl reissue. Long out of print, the original 1974 score was composed by Jerry Goldsmith in just 10 days after producer Robert Evans rejected Phillip Lambro’s effort at the last minute,.

While the film was set in the 1930s, the score didn’t seek to emulate the period, rather reflect the mood of the film, which stars jack Nicholson as private investigator J. J. “Jake” Gittes maneuvering his way through a politically and morally corrupt Los Angeles.

“I remember [Evans] speaking about the music having a contemporary feel, contemporary meaning the ‘30s,” Goldsmith said in an interview before his death in 2004. “I said, ‘Bob, I don’t think so – you see that on the screen, why should I do that in the underscore? … Emotions are timeless.’”

Said to be David Lynch’s favourite soundtrack, the success of the score rests squarely on Uan Rasey’s mournful trumpet solos, which create a ghostly, other-worldly ambience of melancholy and intrigue.

Reissued by Cinewax, Chinatown is available as a standard black vinyl edition, with new artwork by illustrator and painter Sterling Hundley, and as a deluxe gold vinyl edition which will be available on Black Friday.