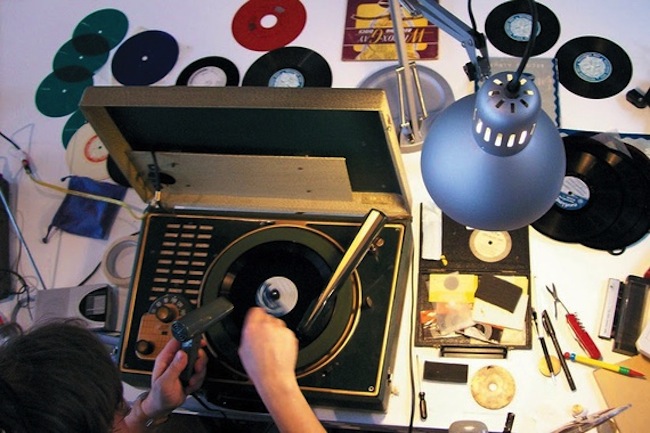 How do you turn a CD into and LP? Just about the same way you cut an LP, it turns out. While Long Player might be a bit of an exaggeration, London-based sound artist and musician Aleksander Kolkowski has developed a way of recycling that famously dying format, the CD, into a modified 4.7″ record.

Speaking to The Atlantic, Kolkowski described the project as “taking the optical digital back to analogue” by using a modified 1950’s Wilcox-Gay Recordette as a make-shift lathe to cut 2 minutes and 50 seconds of audio onto the back of a CD that can then be played back at 45rpm.

Able to feed just about any audio through his customised device, which works by sending a waveform to the needle like a record player in reverse, Kolkowski has toured the gadget across Europe, often cutting live performances direct to disc.

“It’s transforming a disposable media storage device made for cloned copying into a one-of-a-kind cult object,” he told The Atlantic. “In a way, it’s very tongue in cheek. There’s a lot of fetishism about vinyl, but I see this as quite throw-away, really. I do it for free. People bring a CD and I give them one in return.”

The project follows Aleksander Kolkowski’s collaboration with The Science Museum to reconstruct the 27ft-long Denman Horn, a pre-electric sound system that is tentatively being touted as the UK’s largest audio loudspeaker. [via The Atlantic]