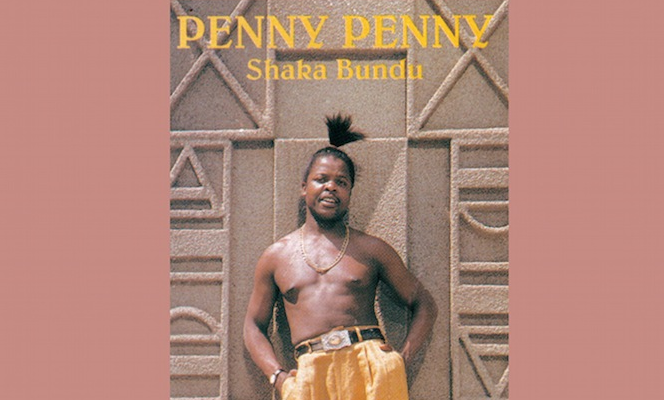 In April 2010, Penny Penny’s 1994 South African house record (or cassette, to be more accurate) Shaka Bundu was posted up on Awesome Tapes From Africa’s superlative blog with a the description: “The tape contains simple yet deep synth-pop anthems that couldn’t give a fuck if you thought they sounded corny at first. It’s that kind of tape.”

Brian Shimkovitz, the ethno-musicological mastermind behind the blog and subsequent record label wasn’t giving Penny Penny a short shrift – Shaka Bundu, like its standout opener “Shichangani”, is a joyous clash of South Africa’s Shangaan (or Tsonga) disco tradition and mainstream US house from a carefree singer with a rags to riches story like no other.

Born into a family of 68 children and 17 wives, Penny Penny graduated from a childhood on the tomato plantations to work in a gold mine where he won trophies for breakdancing. Testing himself as a chef and a street hawker, Penny’s break finally came when he met producer Joe Shirimani while working as a cleaner in a music studio.

The resulting record Shaka Bundu was a big hit, produced by Shirimani, and recored on the fly in just about a week, selling over 250,000 copies with a budget to produce excellent music videos, like this one for the album’s title track.

The Awesome Tapes From Africa reissue of Shaka Bundu will be released in November on vinyl, CD and cassette, and in the mean time you can amuse yourself with a free download of “Shichangani” below. [via FACT]

Awesome Tapes’ Somalian afro-funk release by the Dur Dur Band and the Mulatu-inspired Hailu Mergia And His Classical Instrument both made our top vinyl releases of the month in March and June respectively.