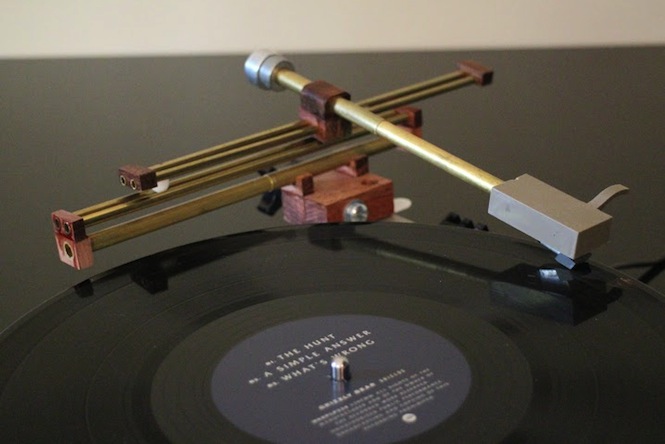 Thomas Bowden is on a mission to rid the world of distortion.

By day, Thomas Bowden is a lawyer in Richmond, Virginia. By night, he’s an enthusiastic audiophile with an ear for invention. Granted his first patent earlier this year, Bowden has developed a new tonearm that mimics the movements of the lathe used to cut records and therefore decrease the friction and subsequent distortion created when a needle makes contact with a groove.

While most tonearms pivot to accommodate the spinning record, Bowden’s tonearm sits at 90 degrees and is attached to a free rolling ball-bearing held between two parallel tracks. Speaking about the design, Bowden says: “By allowing the needle to move in the exact same way as the cutting head moves, you are avoiding a lot of distortion.”

While engineers have been looking to crack the question of vinyl distortion since day one, Bowden believes his design – which came to him while adapting a set of tracks for his model train set – has one over on the competition. Using air compression and computer technology may cost up to $20,000 but he says his simple kinetic design has “corrected” the “flaws” those technologies still encounter. [via Richmond BizSense]

Watch the prototype tonearm in action below.

Want to know what’s really going on in your grooves? Watch this stunning slow motion video of a needle running through vinyl, captured under an electron microscope.