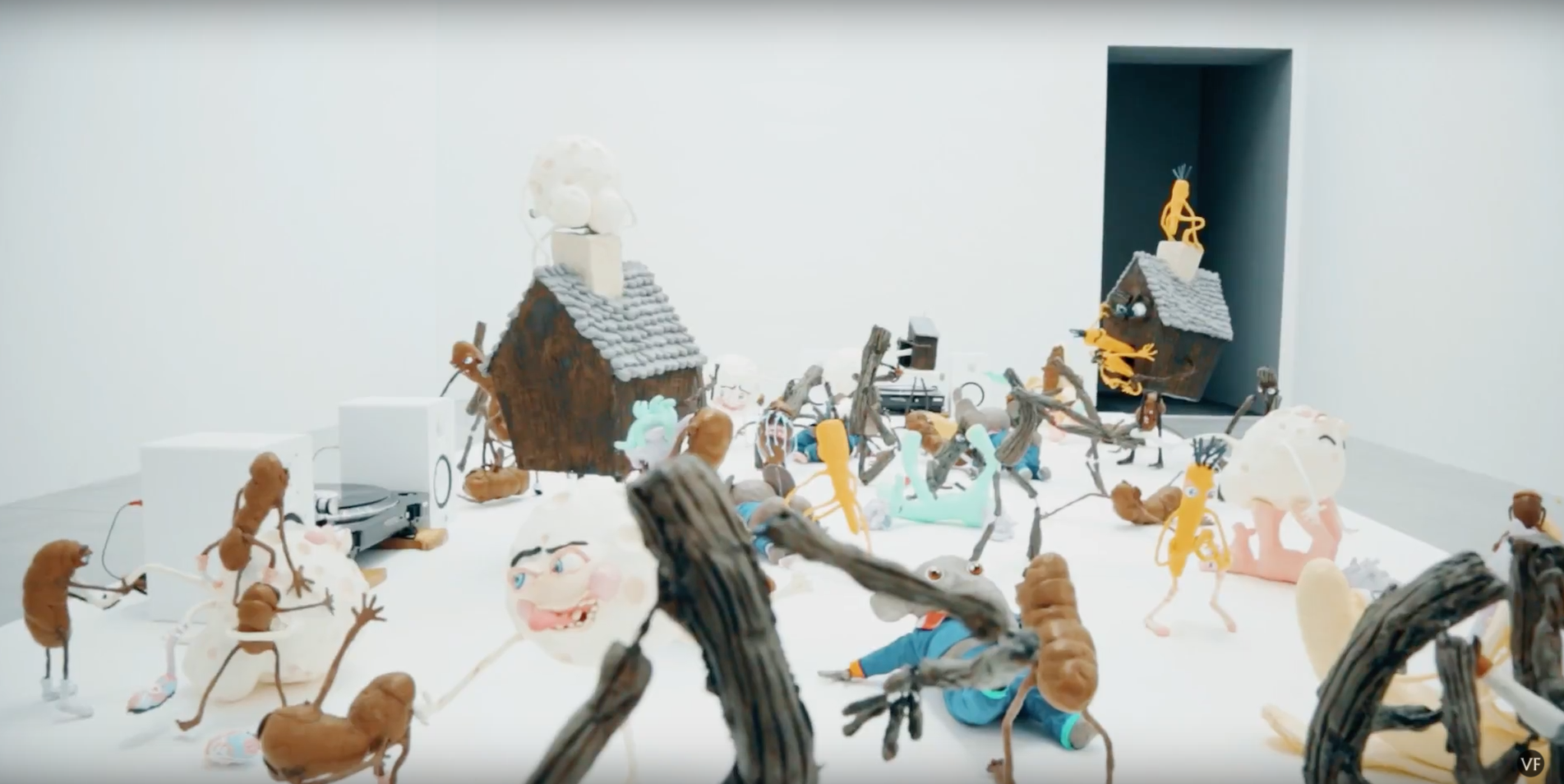 Who am I to Judge, or, It Must be Something Delicious opens at Lisson Gallery this week.

As with Djurberg’s other installations and animations, Berg is tasked with creating sonic environments for the works, crafting organic ambient soundscapes that drift effortlessly between rainforest psychedelia and shimmering neo-noir tapestries. For this exhibition, Berg’s soundtracks demand interaction, as the audience can alter the mood of the piece itself by picking tracks from three records, spinning on three turntables.

In this short film, Djurberg and Berg reveal the process behind their creative collaboration, emphasising the role of the soundtrack in creating an almost tangible experience for the viewer who is otherwise physically removed from the work.

You can read an extended transcript from Anoushka Seigler’s interview with Nathalie and Hans below.

Who am I to Judge, or, It Must be Something Delicious runs from 30th March to 6th May at Lisson Gallery, 27 Bell Street, NW1 5BY, London. Click here for more information on how to visit.

Stop motion is quite a different and time-consuming way to create video. What do you enjoy about it?

Nathalie: Yeah, I mean I’ve been making stop motion since I was 19. The real problem was that I just hadn’t found the right medium to work with, so I started teaching myself stop motion and I’ve been working with that ever since. I really like the process because it is so slow that you can follow the story in slow motion and I really enjoy that. I really enjoy the process of making it and that, for me, is really where the art is.

Do you think about the audio when your creating the visuals?

Nathalie: Before we started working together I really just stole pieces of music, but now I think about it a lot and we discuss it a lot too. For me it feels like when Hans makes the music he can show something that I want to say, but that I’m not able to show.

Hans: They do carry each other really well I think. We don’t talk about the actual instruments or melody or the actual content of the film, we just talk vaguely around these ideas and then I start collecting the sounds I want to have and then when she’s finished with the animation, I compose directly to it. One project we did the music came before the animation. You were struggling a bit with the animation and we played the music in your studio..

Hans: So then you were inspired by the music instead and the music sort of got the animation back on track. So it’s looping back and forth a bit.

There’s a humour to the static sculptures. How do they come about?

Nathalie: I don’t remember how it came about, I don’t really remember how anything comes about! I think there’s a humour to all our work. I had an idea that was hard to resist and the idea of something really static even though there actually so much going on. The music comes off and on and you can change it depending on which track you are playing.

It’s a really nice marriage because sculpture is essentially static but there is always so much movement in the way that sculpture is created. And vinyl could be seen as a sculptural representation of sound. Is it important that your music to be played on vinyl?

Hans: In this case I had an animation to compose music for so we had a similar kind of discussion, not exactly what it’s about but themes around the whole thing. I wanted to create different atmospheres and moods that would either highlight the sculptures or go a bit against the sculptures. We have 3 record players and 2 sides on each record so it’s 6 tracks that are around 12-13 minutes each. It’s over an hour of music and so when you combine the three record players, the mood gets very different. It can get a bit happier, it can get a bit more dark and scary depending on what you choose. It’s also interesting that the audience can change the records. It’s a bit more interactive in that way.

Nathalie: And I really like it also because in my work I can’t help but it becomes humorous, I mean it always does. Hans can make monumental music and he usually has to hold back on that because it would be too far away from what I’m doing otherwise. Even though this piece is humorous, it is dark too but the music can really make it so much darker depending on which records you play.

What is really nice, is music is more physical than art because you’re almost never allowed to touch anything. But with music you feel it inside. There’s no difference from hearing it outside of yourself and inside.