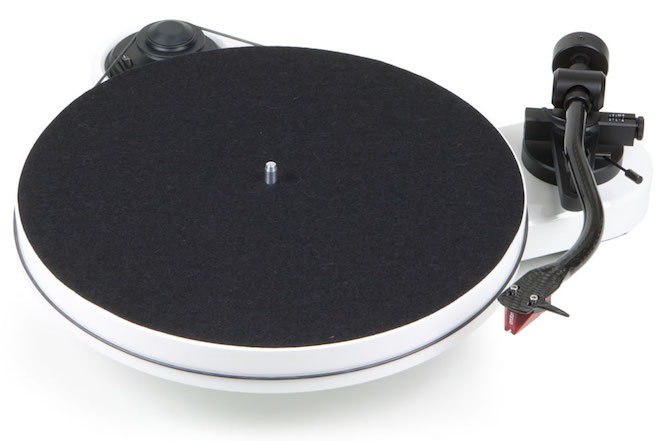 Cons: Struggles with older and denser records. Also doesn’t time as well as the best decks at this price.

Verdict: The RPM1 Carbon is undoubtedly an attractive turntable in both aesthetic and sonic respects, it’s not the strongest when it comes to timing but does have a refinement that is often denied to affordable decks.

Pro-Ject makes a huge and slightly baffling array of turntables that come in all shapes and sizes, from the entry level Essential to the seven grand Signature. But it’s in the sub £500 arena that this company is strongest. The RPM1 Carbon is an attractive and stylish turntable built around a V shaped chassis with an MDF platter that sits on an inverted bearing. What really marks it out is the inclusion of a carbon fibre tonearm, an S shaped one at that. Carbon fibre is theoretically a good material for the tricky job of assisting a stylus to track a groove because it’s light, stiff and has good self damping, all useful qualities when you don’t want something to vibrate. You’ll find carbon arms on many of Pro-Ject’s top models, albeit usually in straight form.

The RPM1 Carbon has a free standing motor which is beneficial because motors vibrate so need to be kept away from the stylus. That said how successful this is will depend on what you put this turntable on, wood for instance is very good at transmitting vibration – hence violins etc – so is best avoided. Drive is via a long belt that you switch between motor pulleys to change speed, which is less fiddly than having to take the platter off as found in competing products.

This turntable comes pre-fitted with an Ortofon 2M Red cartridge (£80) but you need to fit the counterweight and use a basic (but free) balance gauge to get it in exactly the right place and provide appropriate downforce, other brands make this job somewhat easier.

This turntable can be had in black, red or white with the former being least likely to show the dust, there is no lid or cover to keep it out. Connection to the amp is with a replaceable interconnect cable, which means you can upgrade this part with ease. I was impressed with the refinement of the RPM1 Carbon, give it something crisp and open to play and it does a great job of letting the sparkle of the highs and the power of the bass come through. It did a great job with Laurie Anderson’s ‘Monkey’s Paw’ (from Strange Angels), delivering a massive drum sound and bright but natural high percussion notes alongside Anderson’s voice which was in great form back in the nineties. The fretless bass sounded particularly chewy as well.

With the somewhat denser funk of Conjure’s ‘Jes Grew’ (Music For the Texts of Ishmael Reed) the experience was not quite so engaging. This turntable seems to have difficulty keeping things together when there is a lot going on. The timing is not as precise as the tonal balance, and you have to work a bit harder than you do with the best at the price to enjoy busy music.

At least that’s the way it seemed until I put on Binker And Moses’ ‘Dem Ones’, a recent release on the fabulous Gearbox label that sees the saxophonist and drummer shredding some intense contemporary jazz. All too often this can sound like a mess, it ain’t easy listening but it does make sense with a decent system and this turntable is in that camp. It brings out the lyricism of the sax and the scale of the drums without breaking a sweat. Only the full depth of the recording is restricted. So it would seem that quality of recording is the key to success with this turntable, good news for buyers of new vinyl less so for collectors of old.

Reviewed by Jason Kennedy, Editor of audiophile magazine The Ear