“I see a Morning Story as this part where you are half awake in your bed, sweaty, messy thoughts, not sure where you are, about to wake up,” Tove Agéli, who performs as Toxe, tells us, trying to articulate the “freaky confusion” and delicate intensity that underpins her latest A/V project Morning Story.

Working with Niclas Hille, the world Toxe creates treads a line between the familiar and the surreal, where uncanny apparitions weave magical narratives.

With the EP available to order now, you can watch the full video now and read about the processes behind the work with Toxe and Niclas below.

How important is it for you to have a visual element to your music?

Toxe: For me it’s not a question of if it’s important or not, with some music I make I just get a very visual feeling and then a strong need of adding this to the experience some how. I usually like creating a whole package and story around the sound if not for the public at least for myself, that usually helps me a lot. Some music feels really made to be alone as it is too, just a sound, guess it’s all kinda random.

Does the process of creating the visuals happen at the same time as the music?

Niclas: The process was pretty intertwined. There was a stage, when we were already putting a lot of thought into the visual part of the project, but when the music hadn’t fully been written yet.

These sides were organically working together, so much so that there was also a phase when we were creating the film kinda on top of the musical score, and we partially let it direct the dynamic and vibe.

That still leaves out how much of a rollercoaster flow it was, though. Being surprised of our own and the project’s evolution – that was pure sweetness.

Which artists have you worked with and do you work closely together?

Toxe: I never really collaborated with someone like this before. I think cause I wanted to do everything myself or maybe mostly just because I was really isolated when I lived in Gothenburg and I had a strong need for collaborating with someone irl, so it never happened before I moved.

Why the collaboration felt so right this time was cause it all started in a such a genuine way. I didn’t know Niclas and his work that well in the beginning and had only met him a few times. But I loved his way of being and thinking so much and that was super important to me, rather than even knowing about someones actual work. I felt like it could be a really interesting and meaningful collaboration. And now he’s one of my favourite artists.

Niclas: Yes, I was quite surprised when you started talking to me about the initial thoughts and asked me to do this together. Looking back, it feels like the constant excitement of the project broadened my sensitivity levels a lot. I’ve never had that kind of experience either.

Toxe: Also, Embaci’s contribution to this whole story is a true blessing. We talked about working together for a while and I have such a big appreciation for her and her voice and that collaboration happened really organically and felt so genuine but happened kinda last minute. So much last minute that she couldn’t be on the vinyl but I’m so happy to have her being part of the video. Talk us through the artwork & video to Morning Story… What is the story here?

Toxe: The word, Morning Story, I think sounds really peaceful when you first hear it, pretty and calm. But to me I see a Morning Story as this part where you are half awake in your bed, sweaty, messy thoughts, not sure where you are, about to wake up. But still feeling the freshness of the daylight filling your room making you feel like a mixture of some freaky confusion and something pretty and new. My life kinda felt like this part of the day during the last 4 months. Like being trapped in this morning story.

The artwork was really fun to make, we built up an environment kinda like a small theatre and worked with shadows, Niclas’ drawings and different fabrics. At first, it all could give away this cute feeling from the soft pink and the blue sky on the backside. But if you look closely I think it looks kinda surreal and scary to be honest, there’s something about blue skies with soft clouds that feels kinda creepy to me. At least I feel like you can see there’s more dimensions to the artwork after a closer look.

Niclas: We wanted to have its strength coming from a vibe that’s driven by reality, but at the same time kinda pulls away from it. It’s real in a strange way, but certainly feels alive.

I think we were walking along a line of making it relatable but keeping it a rather abstract Morning Story feeling. So it felt very right to work with these tiny characters that we placed in strange environments or animated sceneries.

Feeling that it’s about the relationship of a character in its environment is probably most present at all moments in the film and most definitely the cover too.

Making something very emotional feel relatable is a magical bridge to somebody else, but I don’t know if there’s a way of making somebody fully relate to your own feeling if you don’t include that person’s world somehow. I feel like that’s what stories succeed to do.

Toxe: Yes, by wrapping this whole feeling inside the format of a story it can be relatable and stay abstract.

Niclas: Maybe we tried to tell the most abstract story without letting the story’s own feeling slip away. 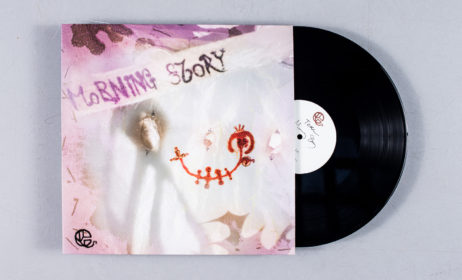